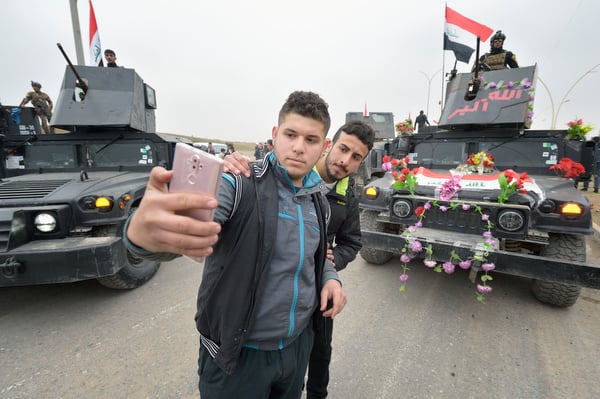 “Security is the most critical need we have.” — Chaldean Catholic Archbishop Bashar Warda on the remaining Christians in Iraq.

In the wake of ISIS

MOSUL, Iraq (UMNS) — Many residents took to the streets to celebrate when half the city was liberated from the control of the Islamic State, yet some Christians no longer see a future there. The Rev. Paul Jeffrey, a United Methodist missionary who went to Mosul as part of a 10-day reporting trip to war-weary Iraq, has the story.
Read story

NASHVILLE, Tenn. (UMNS) — Annual conference voters will decide whether five amendments will become part of The United Methodist Church’s constitution. Heather Hahn has an overview of the measures up for a vote.
Read story

NASHVILLE, Tenn. (UMNS) — The Council of Bishops and General Council on Finance and Administration are trying to collect the dates of all annual conference meetings around the globe. Conference secretaries can submit the dates and location of their meetings with an online form. The submitted dates will appear on the United Methodist calendar.
To submit annual conference dates
To see calendar

LEAWOOD, Kan. — National Public Radio recently featured an interview with the Rev. Adam Hamilton, pastor of the 20,000-plus-member United Methodist Church of the Resurrection in Leawood. Hamilton spoke about the church’s new sanctuary and about a sermon series he’s preaching that deals with political divisions in the U.S. over immigration and other issues.
Read interview excerpts

WOLCOTT, Vt. — As part of a video series on historic sites, the Vermont Historical Society and Local Fox 44 News interviewed the Rev. Pat Thompson of Wolcott United Methodist Church about the Rev. George S. Brown, an African-American pastor who founded the church in 1856.
Watch video

NASHVILLE, Tenn. (UMNS) — The United Methodist Board of Higher Education and Ministry is accepting grant applications through March 17 for Ethnic-In-Service Training grants of up to $10,000. The grants are awarded for initiatives and programming designed to recruit, train and retain ethnically diverse United Methodists in leadership positions in every level of the church and its ministries.
Read press release

Financial Tips for Clergy: Take the bite out of income taxes — 10-11 a.m. CST, webinar. The Rev. Don Joiner, a certified financial planner, offers tips to clergy who are navigating the preparation of taxes and planning for a sound financial future. This United Methodist Discipleship Ministries webinar addresses the unique challenges faced by clergy with things like Social Security payments, estimated tax payments, housing allowances or exclusions, and reimbursed expenses. Details