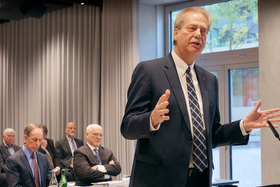 The United Methodist Church’s top court was urged during an oral hearing to rule in advance on the constitutionality of proposed legislation that will come before a special legislative session in February.

That discussion was part of the first of three hearings that opened the Oct. 23-26 meeting of the United Methodist Judicial Council.

The first hearing was on a request for a declaratory decision from the Council of Bishops on the constitutionality of the three sets of legislative petitions that form the report of the Commission on a Way Forward. That oral hearing took the entire morning.

The special called session of General Conference, set for Feb. 23-26, 2019, in St. Louis, will consider the Way Forward report as The United Methodist Church tries to resolve the decades-old conflict over homosexuality that has worsened and threatens to break up the denomination. The Way Forward Commission was appointed by the Council of Bishops to find a way for the church to remain united amid these divisions.

A ruling on the plans is critical, noted Bishop Cynthia Fierro Harvey, the Council of Bishops’ president-elect, who spoke to each part of the Way Forward report along with Bishop Kenneth H. Carter Jr., the current president, and William Waddell, the council’s attorney.

“This could very well be the most important decision we (the church) will ever make,” Harvey told the court. “It has been the desire of the Council of Bishops to do everything we can to clear the way for the delegates to do their best work.”

The 2016 General Conference, the denomination’s top legislative assembly, asked for a way to seek the “unity of this church we all love,” and that means unity not uniformity, she added.

“Those who have yet to hear the good news are what is at stake here,” Harvey said.

A split in the church threatens things that matter, such as developing initiatives like Imagine No Malaria, responding to hurricanes and other disasters, starting new congregations and providing nutritional supplements across the world that keep children from dying, said the Rev. Tom Berlin, part of the writing team for the One Church Plan, which was supported by a majority of the Council of Bishops.

“Schism is not a plan of revitalization as some would suggest,” Berlin said. “It is a destructive event.”

Key elements of the One Church Plan include eliminating prohibitive language related to homosexuality in the United Methodist Book of Discipline. Each annual conference board of ordained ministry and clergy session would determine standards for ordination or certification, including standards related to human sexuality. Currently, the church bans same-sex marriage on church grounds and ordination of "self-avowed practicing homosexuals."

The plan also allows ordained clergy to perform same-sex marriages but does not require them to do so. Churches can vote on whether to hold same-sex marriages in their buildings. Clergy are also free to transfer to other conferences or churches based on the standards for ordination regarding homosexuals.

The Rev. Keith Boyette, who wrote a brief opposing the plan and questioning its constitutionality, argued that General Conference cannot delegate its powers on a distinctly connectional matter, even to annual conferences. Boyette is president of the Wesleyan Covenant Association, an unofficial traditionalist group.

The One Church Plan “is a radical departure from the church’s teaching on sexuality, marriage and ordination,” he declared, and would abandon settled doctrine and teaching on those topics.

“It violates the principles at the core of the connection.”

But doctrine always serves discipleship, Carter said. He said theology is both contextual and essentially practical, relating to the daily lives of church members around the world. 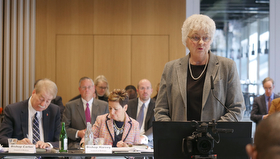 Patricia Miller speaks at the United Methodist Judicial Council meeting in Zurich. Miller, a member of the denomination’s Commission on a Way Forward, presented the Connectional Conference plan to the council. Photo by Diane Degnan, UMCom.

“God has not given us the luxury of living in a simple time with a simple faith,” he said. “God has given us Jesus Christ whom we encounter as Lord and Savior.”

The Connectional Conference Plan found in the Way Forward report is, by common agreement, the one that would most dramatically restructure the church and take the longest to implement.

It would eliminate the U.S. jurisdictions and replace them with three values-based connectional conferences. Annual conferences would align with one of those, based on theology or perspective on LGBTQ ministry.

As noted in the hearing, the plan offers considerable “space” to United Methodists of different perspectives on human sexuality. But it would require eight church constitutional amendments, and in addition to restructuring would mean profound changes for the episcopacy and church agencies.

“It is so complicated and has so many parts,” said Waddell, who predicted that the Judicial Council could be hearing many more cases regarding the plan if it passed at General Conference.

Patricia Miller, a member of the Commission on a Way Forward and executive director of the Confessing Movement, an advocacy group that urges the denomination to hold the line on homosexuality teachings, spoke on behalf of the plan. She noted the commission worked carefully on it, striving to make it constitutional.

But she cautioned that it’s a package, and rejection of some of its parts would be a problem for the whole. “The legislation should be considered in its entirety,” Miller told council members.

Bishop Carter said traditionalists’ support for the plan ultimately faded because it didn’t create enough space for them on the LGBTQ question, and because of the plan’s complexity.

“I confess I’ve read it many times and don’t fully grasp the complexity,” he said.

Miller joined other speakers in asking the council to provide guidance about constitutional problems.

“It is essential that you rule now, before General Conference, on all three of these plans,” she said.

The Traditional Plan would keep the current homosexuality-related restrictions in church law and require stricter enforcement. Annual conferences that would not promise to abide by the Book of Discipline would be pushed to leave, and the legislation includes what backers call a “gracious exit” plan.

The Rev. Tom Lambrecht, a Commission on the Way Forward member, spoke for the plan in the hearing. Lambrecht is a leader of Good News and the Wesleyan Covenant Association, both groups that support the denomination’s current restrictions related to homosexuality.

He said the Traditional Plan’s affirmation of marriage as between one man and one woman and prohibition on ordination of gay clergy reflects the views of the “overwhelming majority” of United Methodists going back decades, and as affirmed by General Conferences.

Lambrecht described the plan as one of “unity” based on a common, biblically based view of human sexuality.

“It forces every annual conference in practice to define itself in relation to one matter — human sexuality, a topic about which there are many different opinions in every conference,” the bishop told council members.

He added that his analysis of the plan led him to this question:

“Is this a way of dissolving The United Methodist Church, which we understand some groups have proposed?”

The constitutionality of certain provisions of the plan, particularly those dealing with enforcement, were discussed in detail.

Thomas Starnes, chancellor for the Baltimore-Washington Conference, argued that the Traditional Plan as a whole is not about preserving unity amid diversity and thus is not in harmony with the call for the special General Conference, as required by the constitution.

He and Lambrecht offered different views on whether the plan really represents the work of the Commission on a Way Forward, which the special General Conference is supposed to address.

Lambrecht noted the commission answered to the bishops, who had them work up the other two plans in detail. If given the opportunity, the commission would have produced a full traditional option much like the Traditional Plan, he said.

That the Traditional Plan ended up in the appendix, with a disclaimer about its authorship, is not a constitutional problem, Lambrecht insisted.

The Judicial Council will release its decisions about the Council of Bishops request and other items on the October 2018 docket some time after the court adjourns on Oct. 26.

Bloom is the assistant news editor for United Methodist News Service and is based in New York. UMNS reporters Kathy Gilbert and Sam Hodges are based in Nashville, Tennessee, and Dallas, respectively. Contact them at 615-742-5470 or [email protected]. To read more United Methodist news, subscribe to the free Daily or Weekly Digests.

As The United Methodist Church moves toward a February legislative meeting, the Judicial Council has been asked to look at constitutionality of proposed plans.
General Church