• More than 3,500 homes were destroyed and more than 450,000 evacuated after the Mount Nyiragongo volcano erupted May 22.

• Serving in partnership, the United Methodist Committee on Relief and Connexio Switzerland respond to urgent needs after the disaster.

• The response was credited with ministering to people regardless of tribe or religion.

On May 22, the Mount Nyiragongo volcano in the Democratic Republic of the Congo began erupting. Ten miles away, in Goma, more than 3,500 houses were destroyed, and volcanic lava decimated fields and animals. More than 450,000 people were evacuated. Bishop Gabriel Yemba Unda of the East Congo Episcopal Area immediately appealed for help to survivors, who desperately needed food, medicine and water.

Jean Paul Dietrich, a United Methodist Board of Global Ministries missionary and representative of Connexio Switzerland based in Lubumbashi, DRC, said the assistance benefits eastern DRC survivors. Connexio initially served the United Methodist faithful of Goma, who were in Bukavu, Sake and Rutshuru, with $5,000 worth of food and other necessities. Now the mission network is helping more than 200 households of the most vulnerable — especially pregnant women, older adults and individuals with disabilities — for an amount of $20,000.

“The beneficiary selection criteria were based on vulnerability,” said Michel Kizibisha, project manager in the Kivu Provisional Annual Conference. 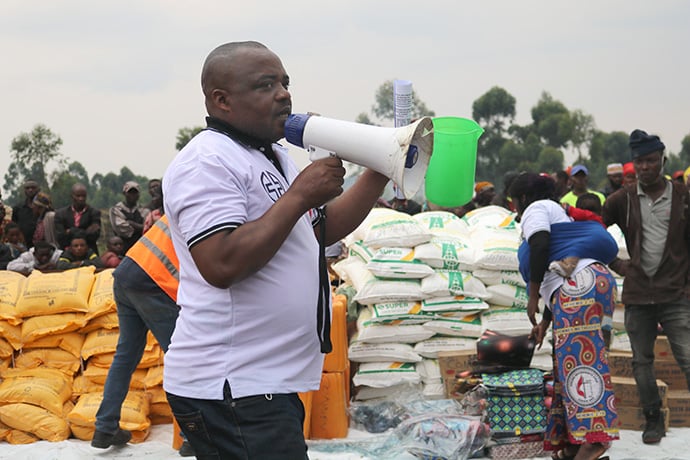 According to Dr. Damas Lushima, health coordinator in the East Congo Annual Conference, the money also was used to purchase drugs for survivors. Leonard Shako, a registered nurse at the Majengo Health Center in Goma, said, “The drugs I received today will help the victims of Nyiragongo volcano to receive outpatient care in different sites.”

Pastor Amsini Valentin of the Majengo Local Church in Goma expressed hope that the initial aid would inspire others to reach out to their neighbors.

“Most of my faithful lost their homes and goods,” he said. “Today [the food and other donations] will help my faithful while waiting for the government to take measures” for people to return home.

“The Methodist Church,” said Ukizevuba Gaspard, “has come to our aid when most of the victims are not even United Methodists.” Donations include corn, cassava flour, cooking oil, a basin, plates, spoons, soap, a loincloth, salt, toothbrushes and toothpaste for affected households. 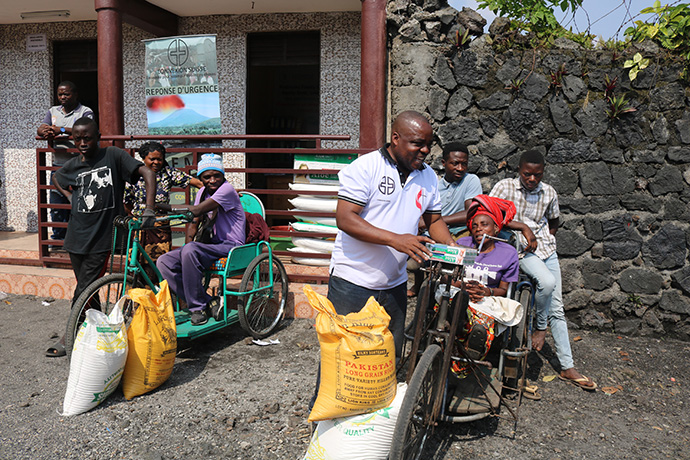 Gilbert Kahasha, 85, said the response proved that The United Methodist Church “preaches the gospel, while taking into account the vulnerable people. I lost my house, and today I live in the Bujari site in Kibati. It is my first time to have a large amount of food since I have been here.”

Jean Tshomba, who coordinates UMCOR’s disaster-management office in eastern Congo, said the church is seeking new ways to respond to the enormous needs. “I ask this devastated population to love each other,” he said, “because today the church has just shown her love.”

“Only God, creator of the world, will continue to assist this stricken population,” said Unda. “I say ‘thank you’ to Connexio Switzerland and UMCOR for their rapid relief to the population of Goma.”

Angola West Conference mobilizes to provide food and other relief as heavy rains destroy homes and other infrastructure.
Social Concerns

United Methodist leaders are assessing the damage following the eruption of the Mount Nyiragongo volcano, which swept away a church and many homes.