Editor’s note: The Rev. Donald E. Messer is executive director of the Center for Health and Hope. He offers an update on the organization’s work.

After her parents died from AIDS five years ago, Jackeline, then 12, had no choice but to live with her impoverished, elderly grandmother, Martha. Together they struggled to survive, living in a crumbling, 8-feet-square, dirt-floor shack in the rural outskirts of Maua, Kenya. With only the food supplied by neighbors and no opportunity for education, life looked bleak and the future hopeless. 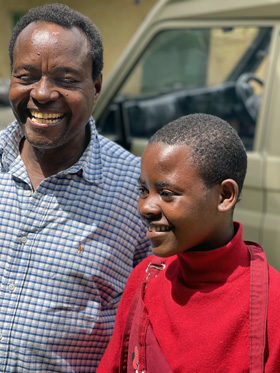 Stanley Gitari (left), Maua Methodist Hospital supervisor, celebrates the construction of a new home for Jackeline and her grandmother. After her parents died from AIDS, Jackeline, age 12 at the time and HIV positive, had no other choice but to live with her impoverished grandmother in a dirt-floor shack in the rural outskirts of Maua, Kenya. Since 2004, Gitari and his Maua Methodist Hospital team have built about 360 homes. Photo by the Rev. Donald E. Messer.

“Then a miracle happened,” Jackeline, now 17, said. The staff of Maua Methodist Hospital informed her grandmother that someone would build them a small home, provide fees for schooling and ensure both had health insurance.

This past June, Jackeline and Martha tearfully accepted the keys to their new home. Neighbors and international guests danced and sang as Stanley Gitari, Maua Methodist Hospital administrator, led speeches and prayers of dedication.

The excited clamor of celebration fell to near silence when Chin Keong Tan, a center volunteer from Denver, sang with his deep basso profundo voice: “Bless this house … make it safe by night and day.” Villagers touched their hearts or raised their hands to the heavens as his voice echoed throughout the lush jungle valley.

This home was but the first of 12 houses that donors to the Center for Health and Hope, based in Centennial, Colorado, plan to sponsor this year. The center is a faith-based organization dedicated to supporting and advocating for persons infected and affected by HIV and AIDS around the world.

Since 2004, Gitari and his Maua Methodist Hospital team have built about 360 homes. A careful process ensures the most needy and vulnerable children receive homes. Social workers are assigned to the families to make sure children stay healthy and attend school.

“God has, indeed, worked a miracle,” declared Gitari, a 1991 graduate of United Methodist-related Oklahoma City University. “Never did we think that we would be able to assist so many families when we received that first seed money from the United Methodist Texas Annual Conference.

“Good health care requires safe living facilities,” he continued. “Families living with HIV are especially desperate because they have lost wage earners and the children are often missing an education. What continues to haunt us, however, is the unmet need of so many marginalized and stigmatized families.” 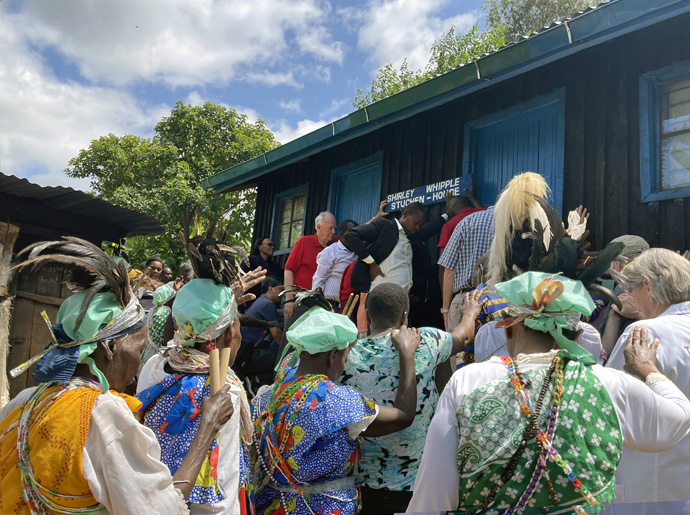 Neighbors join religious and hospital leaders in dedicating a new home built by the Center for Health and Hope in collaboration with Maua Methodist Hospital. Former Bishop Catherine Mutua of the Methodist Church in Kenya is seen praying at the left-hand corner of the home. Photo courtesy of the Rev. Donald E. Messer.

To meet that need, Gitari and volunteer Kathy Mann of Fort Collins, Colorado, invite individuals, church groups and nonprofits to join in partnership by paying the full costs of construction by local workers or hosting visiting mission groups, who travel to Kenya to provide both labor and funds.

A gift of $3,000 (U.S.) ensures construction of a two-room house and pays the salaries of a Kenyan team of four building subcontractors; all construction materials, including a small water tank and four windows; a year’s health insurance for the family; school fees, uniforms and shoes; and mattresses, blankets, and other essentials. The hospital arranges legal protection so no one can take the home away from the children.

The home established for Jackeline and Martha was one of four sponsored by former United Methodist Communications producer Shirley Whipple Struchen of New York City, in honor of her loved ones and in recognition of her retirement after 20 years as executive director of the Religion Communicators Council.

The Center for Health and Hope is a faith-based organization dedicated to supporting and advocating for persons infected and affected by HIV and AIDS around the world.

To learn more about the center’s programs and to get involved, visit centerforhealthandhope.org.

“This is my way of showing thanks and gratitude to all the people who have supported me in my life journey,” she said.

The Struchen House is among 25 homes built by donors to the Center for Health and Hope in recent years.

“We believe in sending money directly to the hospital and investing the funds into the local economy by hiring local workers,” said Bruce Berger, of Denver, the center’s treasurer and chair of the United Methodist Mountain Sky Conference Committee on Finance and Administration. He and his wife, Ruth Ann Russell, were among the first to promote the housing program, sponsoring homes after the deaths of Berger’s father and a beloved former pastor and his wife, the Rev. Paul and Dr. Paula Murphy, also of Denver.

Many churches prefer to send volunteer work teams to Kenya. “These on-site visits,” Gitari said, “deepen church mission commitments, and many volunteers return more than once to Kenya. Unfortunately, during the COVID pandemic, or times when ‘threats of terrorists’ frighten people from traveling to our country, the building of houses comes to a near-stop.” 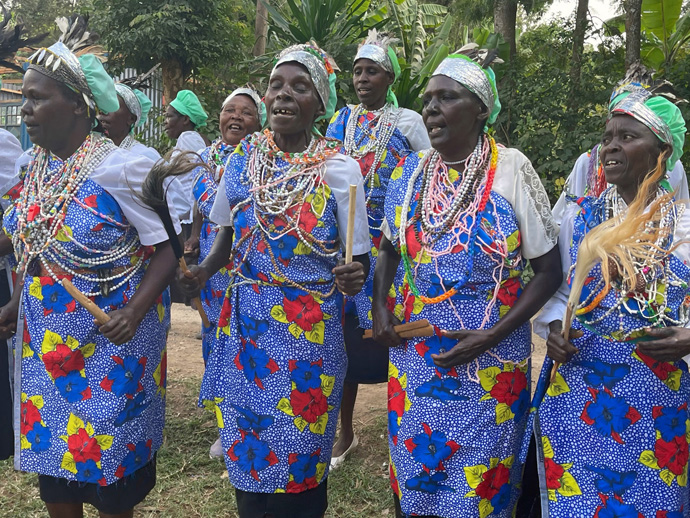 The dedication of a new home for Jackeline and her grandmother, Martha, prompts neighborhood women in Maua, Kenya, to sing and dance, praising donors and God. The home is the first of 12 houses that the Center for Health and Hope and its patrons plan to sponsor this year. Photo by the Rev. Donald E. Messer.

At the dedication, grandmother Martha declared, “My granddaughter has a room to study, invite friends over and relax like other kids. I never believed I would be able to sweep a nice floor in my own house. God has given me my dream.”