When United Methodist native peoples of other countries joined the indigenous Sami people of Norway to share their stories at a meeting near the Arctic Circle this winter, the similarities of their experiences were no surprise.

That story is one of the struggle to hold onto native lands and protect the environment while battling attempts by others to eradicate native language and culture, he said.

“Sometimes it seems that you’re in this by yourself but actually you’re not,” Wilson said.

That meeting and two other related gatherings in Norway in February marked the starting point for the newly formed United Methodist Global Working Group on Indigenous Peoples. 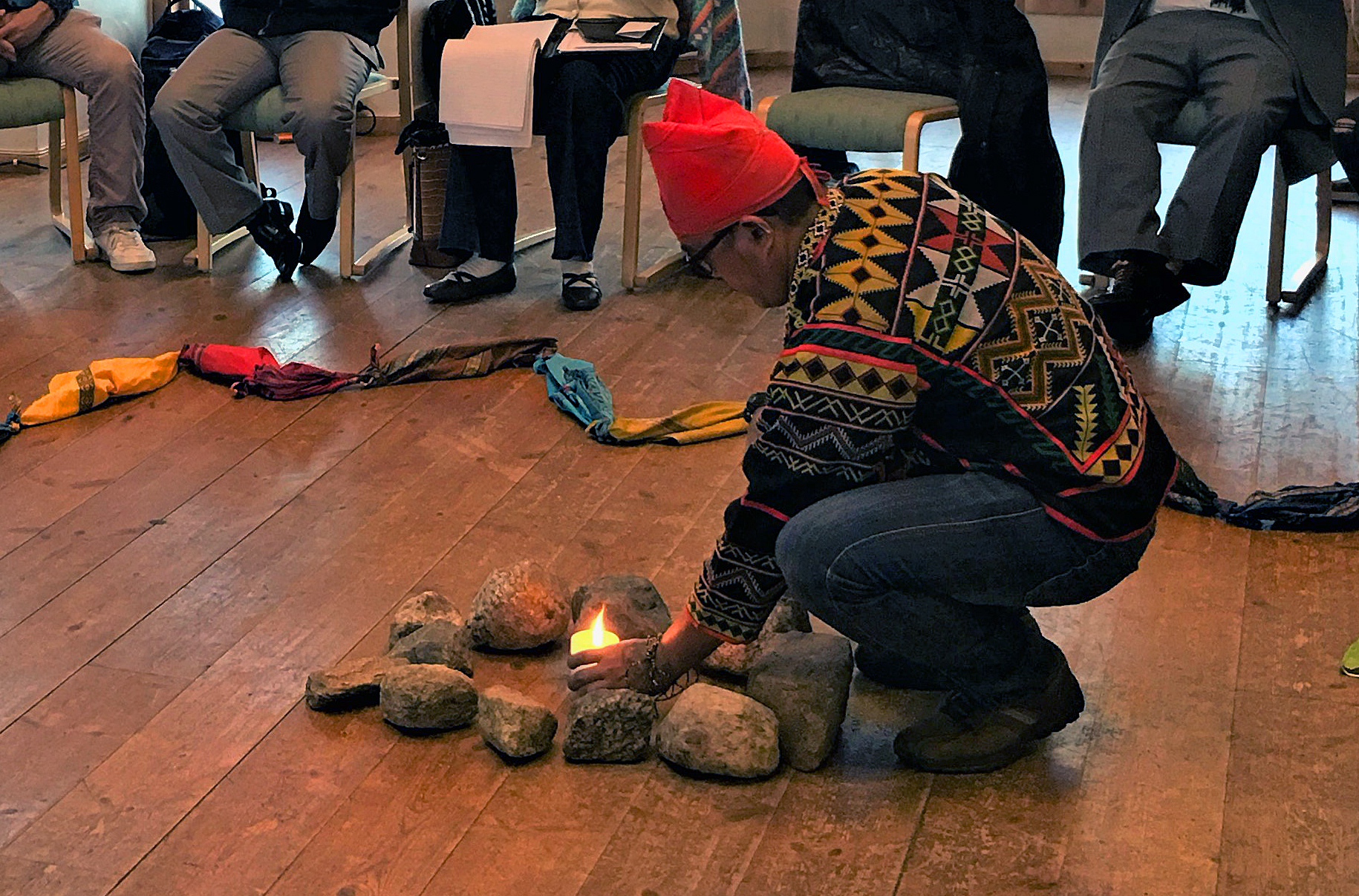 Close up of morning meditation during the gathering of indigenous peoples in Soltun, Norway. Photo courtesy of Levi Bautista.

The intention is not to create a new structure, said the Rev. Liberato “Levi” Bautista, an executive with the United Methodist Board of Church and Society, and organizer of the indigenous meeting in Soltun, Norway. Instead, the idea is “a platform for joint work and collaboration,” Bautista said.

The goal is to move beyond the “Act of Repentance toward Healing Relationships with Indigenous Peoples” adopted by the 2012 General Conference, the denomination’s top legislative body, to performing “acts of justice.”

“What we mean is: how do you then move from the worship, out of the door of the church and in the community of indigenous peoples?” Bautista asked.

Even if the communication is primarily through email or texts, Phillips said, “We’re able to hear their stories, we’re able to learn of the joy of their lives and also the peril in which many of them are living at this time.”

As with other indigenous peoples, Native Americans have seen their numbers decimated over the last several hundred years, she added. Formally establishing the working group allows them to journey together in the future. “It is a very empowering and encouraging feeling of uniting our voices with others throughout the world,” Phillips said.

Being able to share common experiences and concerns is important. “Part of what society has done has been to segregate some of the (indigenous) communities, even here domestically,” Kernell said. “The stories that we hear are so similar that, really, what we see worldwide is history repeating itself.”

He was pleased with the initial response to the Act of Repentance by the church’s annual conferences to plan how “to develop a healthy relationship with indigenous peoples.” But five years later, Kernell noted, he is concerned that momentum has stalled.

The key, Wilson said, is developing relationships in and out of the church. Discussions about which actions are most helpful to advocate for indigenous rights must be extended around the world.

“Reconciliation is not a ‘one and done’ thing,” he explained. “The United Methodist Church has made all kinds of promises … about how they’re going to support indigenous issues. I’m here to hold the church accountable for those issues.”

What they are looking for is action.

During the past year in the U.S., for example, numerous United Methodists supported Native Americans fighting the Dakota pipeline. And when Wilson wore a Standing Rock T-shirt while attending the meetings in Norway, he learned that many there were familiar with the protests.

As Wilson pointed out in a recent UMNS commentary, the Sami parliament of Norway persuaded its local authority pension fund, KLP, to sell its shares worth $58 million in companies building the pipeline. He would like to see Wespath Benefits and Investments, the United Methodist pension agency, do the same.

In Africa, United Methodists already are working to bring reconciliation between indigenous pygmy tribes and the Bantus, another ethnic group, in the Democratic Republic of Congo.

The Rev. Betty Kazadi Musau, secretary of the Central Congo Conference and health board chair of the North Katanga Conference, has been involved in that work. She acknowledges it will take some time for the Democratic Republic of Congo to achieve the “cross-sector collaboration” that exists between Sami and Norwegians “in terms of culture and language.”

But that is part of the purpose of the global working group. “We will focus on international collaboration as a church, on contributions and challenges for the wellbeing of indigenous people,” she said. 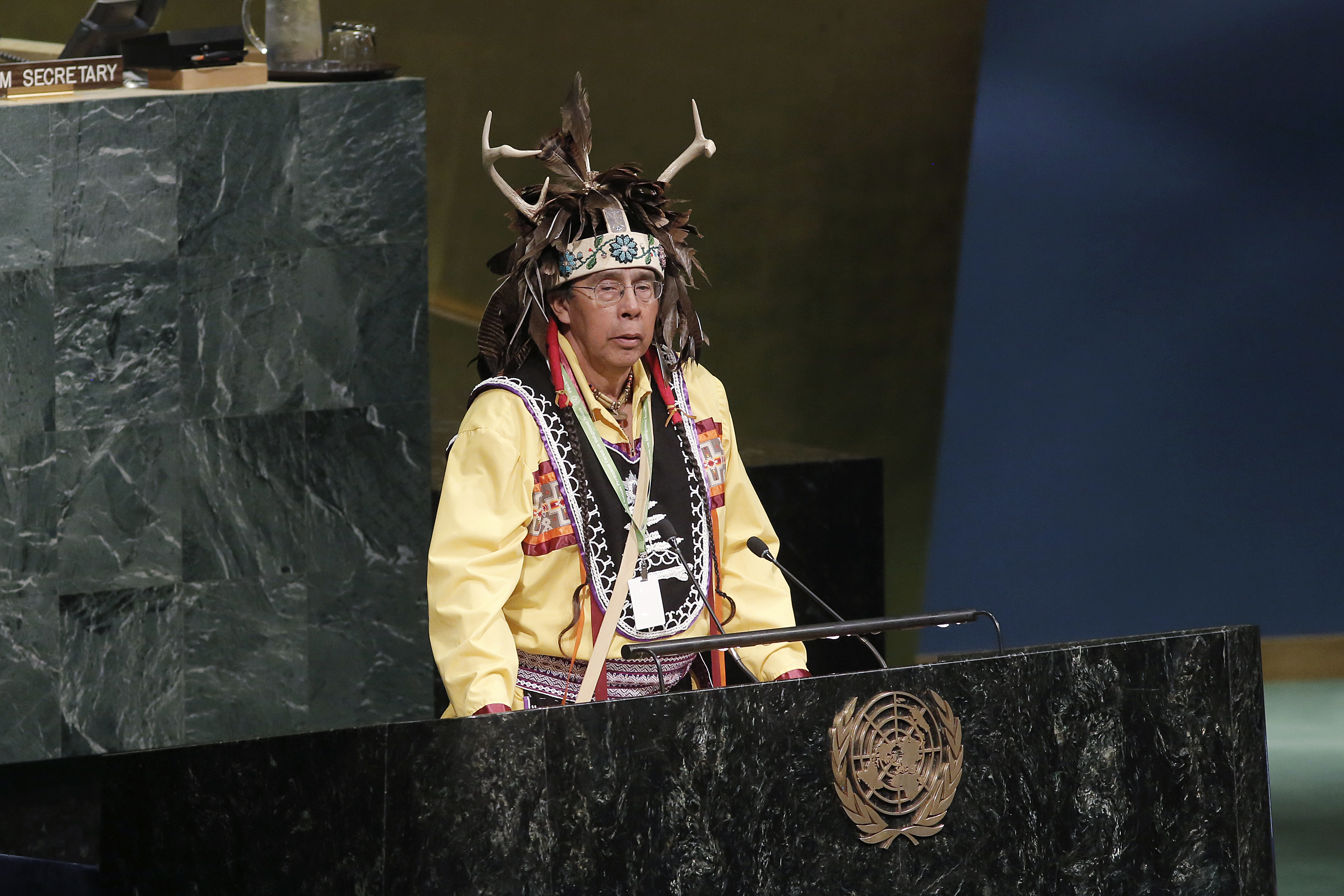 Tadodaho Sid Hill, chief of the Onondaga Nation, delivers the ceremonial welcome at the opening of the Sixteenth Session of the United Nations Permanent Forum on Indigenous Issues. Photo by Evan Schneider, UN.

The Rev. Ande I. Emmanuel, a participant in the Norway meeting, took back to Nigeria his own identity as a “Kuteb” person. The indigenous peoples of Norway, he said, taught him “that unity of the peoples is the strength of their success.”

“These experiences made me reflect on the struggle of the Kuteb people and other indigenous tribes in Nigeria — like the Ogoni and the Biafra tribe whose lands and waters were taken over by the government in the name of national development.”

The agenda for the United Methodist Global Working Group on Indigenous Peoples was further refined when the U.S. participants attended part of the April 24-May 5 U.N. Permanent Forum on Indigenous Issues.

Bautista described the forum as “the widest gathering of indigenous peoples around the world.” This year’s forum was a celebration of the 10th anniversary of the “Declaration on the Rights of Indigenous Peoples” — a statement in which the ecumenical community played a significant role, he said.

The new coalition will take advantage of the annual U.N. forum as an opportunity to gather as a group and to meet with other Methodists who might be at the forum. “It’s a ready-made venue to develop the capacity of the members of the working group,” Bautista said.

Phillips said she is grateful that the Board of Church and Society has used its resources to launch the working group, helping to open doors that “those of us with indigenous voices” cannot open on their own.

The challenge to the institutional church as a whole is to do the same. “As United Methodists, we want our faith community to be stepping out as a church, to be opening ourselves to the risk of learning about injustice,” she said.