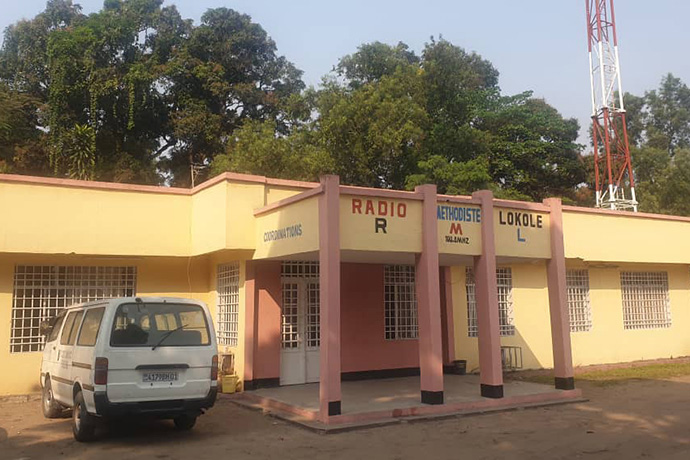 • The Congo church has relaunched its FM radio station to evangelize to more people during the COVID-19 pandemic.

• With a power of 2,000 watts, the radio station covers almost 4,000 square miles in a region inhabited by about 17 million potential listeners in the Democratic Republic of Congo, the Republic of Congo and surrounding areas.

• In the DRC, less than 20% of the population has access to the internet.

After years of silence, Radio Méthodiste Lokole (Lokole Methodist Radio) is up and running, enabling The United Methodist Church in Congo to reach millions of people in Kinshasa and surrounding areas, and intensifying the fight against COVID-19.

The goals were to evangelize, educate and inform United Methodist faithful and members of other religious denominations, said Omadjela, who is the former director of communications for the Central Congo Episcopal Area.

Lokole Methodist Radio was among the first Christian radio stations in Kinshasa, the capital. On the last Friday of every month, the station hosted a prayer program to bring people closer to God and the church.

“At the beginning,” Omadjela said, “the radio was very successful. But it broke down in 2002 when the radio transmitter was damaged.”

In 2014, then Bishop David Kekumba Yemba, with the help of partners from UMCom, tried to get the station running again by repairing the transmitter, Omadjela said. However, it did not work as expected. “After a few months, the radio broke down again.”

Now equipped with a 2,000-watt transmitter, the station covers almost 4,000 square miles in a region inhabited by about 17 million potential listeners in the Democratic Republic of Congo, the Republic of Congo and surrounding areas.

Henriette Kumakana, director of Lokole Methodist Radio, said The United Methodist Church in the Central Congo Episcopal Area needs a radio station — especially during a pandemic. It is an opportunity to reach many people who are staying at home.

In one day, she said, “radio has the capacity to reach the same places that we can reach in one year of evangelization. Through the radio, our faithful, the population of Kinshasa and part of our faithful in Brazzaville, can follow our preaching and messages of encouragement and exhortation.”

In the DRC, where less than 20% of the population has access to the internet, FM radio is a practical way to transmit information. Kinshasa is home to more than 15 million people, the majority of whom are Catholic and Protestant Christians.

Onalowa Wembolenga, an evangelist for Mapamboli United Methodist Church in Kinshasa, said area churches compete with one another, and each denomination develops strategies to retain members.

“We are in an evangelical area with competition where each community seeks to impose itself,” said Wembolenga. “There are multiple community radio and television (stations) seeking to retain members.” This situation influenced the United Methodists to become involved, he said.

“The Methodist church,” Wembolenga said, “could not remain without following the steps.”

He added that radio is an excellent vehicle for the in-depth evangelization advocated by Bishop Daniel Onashuyaka Lunge, who leads the Central Congo Episcopal Area.

“This radio station helps us to evangelize, not only the members of our episcopal region, but also the nonbelievers, non-Methodists who follow us and also become members of our church,” Wembolenga noted. “It helps us to strengthen and keep a permanent contact with our faithful.”

Lunge agreed. “It is a great joy for us to see that the radio has resumed its activities,” the bishop said. “With the help of God, we will do even better to have a television channel. We ask for good use of this tool to spread the word of God.”

Omadjela said the radio's survival will depend on the efforts of all United Methodists, listeners and donors.

The Rev. Kemba Djamba, who serves Nazareth United Methodist Church in the Congo West Conference, said he is happy about the resumption of Lokole Methodist Radio.

“The kind of preaching I would like to hear on the radio is about repentance to become a true child of God,” he said.

Francine Buvara is a housekeeper and faithful listener of the station. Because of the preaching she heard on Lokole Methodist Radio, she decided to become a United Methodist. On Aug. 1, she joined the Mapamboli local church.

“I think this radio is for the future,” she said.

Omadjela admitted high expectations for Lokole Methodist Radio. Beyond entertaining, he hopes that through the station, the values and doctrine of the church will be taught.

“Especially during this period of COVID-19,” he said, “we hope that the Lokole Methodist Radio, through its health programs, will continue to educate and sensitize the population on barrier measures, but also with regard to the vaccine.”

There have been more than 56,000 cases of COVID-19 in Congo and more than 1,000 deaths, according to Johns Hopkins University data. Health care workers and other vulnerable groups began receiving vaccinations in eight provinces in Congo in April, but less than 1% of the population of 89.6 million has been fully vaccinated, according to the Africa Centres for Disease Control.

Omadjela expressed hope that the church will continue its efforts with radio “to save lives with the sharing of good information (and that) we will be discovered by those who do not know us yet.”

Two churches are continuing a unique ministry created by the late Rev. Doug Williams to make brightly colored wooden toy cars to give to children in foster care and those enrolled in the church's early childhood program. Between them, the two churches have distributed more than 17,000 toy cars.
Violence

The attack on a Pentecostal church in Congo, which killed 17, happened near where more than 180 United Methodists were attending worship.
Global Health

Healing Guatemala, a medical mission in Guatemala that is connected with the South Carolina Conference, is taking a huge leap of faith in the hopes of saving a young girl’s life. The ministry is arranging to get a bone marrow transplant for Dulce, a 10-year-old with a rare genetic disorder. But Healing Guatemala needs financial help for the procedure.