Between singing “And Are We Yet Alive” and closing with prayer, U.S. annual conferences took stands on various hot-button issues. These included the treatment of migrants and the status of LGBTQ individuals.

Conference members also heard presentations on the Commission on a Way Forward, the bishop-appointed group that has the task of finding new ways to be in unity amid differing views of homosexuality.

The tension within The United Methodist Church was on display both ahead of and during this year’s annual meetings.

In April, the denomination’s top court released two opinions instructing United Methodist boards of ordained ministry to examine all qualifications of ministerial candidates — including whether they practice “fidelity in marriage and celibacy in singleness.”

The rulings came after seven boards announced they would not consider sexual orientation or gender identity when evaluating clergy candidates, despite the denomination’s ban on “self-avowed practicing” gay clergy.

Two — the New York and Pacific Northwest conference boards of ordained ministry — reaffirmed their 2016 decisions. The Northern Illinois Conference board announced it would continue to follow the procedures for interviewing candidates as laid out in the Book of Discipline. The board also said it would form a task force to review its procedures and policies.

The New York response led the Rev. Chuck Ferrara to resign his membership on the conference board of ordained ministry in an open letter published by the advocacy group Good News. Shortly after, the majority of New York Conference voters approved a resolution in support of LGBTQ clergy.

The Northern Illinois annual meeting saw the commissioning of the Rev. M Barclay, the first openly “non-binary trans person” to become a United Methodist deacon. Non-binary means Barclay identifies as neither male nor female but as gender neutral. The denomination has no official position on transgender clergy.

The Iowa Conference Board of Ordained Ministry was not among the seven boards to speak out last year but did so at this year’s annual conference session. The board’s executive committee stated that it “would not consider sexual orientation or gender identity to be sufficient reasons, on their own, to deny any candidate’s ability to live up to our United Methodist standards for fitness, readiness and effectiveness in ministry.” The committee also acknowledged the work of the Commission on a Way Forward and that Iowa Conference members “are not of one mind when it comes to credentialing LGBTQ persons.”

The California-Pacific Conference Board of Ordained Ministry released a similar statement at this year’s session. “Our practice has upheld that people of all sexual orientations and gender identities can live up to our high standards for fitness, readiness, and effectiveness in ministry,” the statement said. “We will continue to give all candidates equal consideration, as we believe it is the most faithful way to do our work.”

The Baltimore-Washington Conference Board of Ordained Ministry decided not to include Tara C. Morrow, a lesbian and certified candidate, on the approval list for ordination this year. The move both sparked a question of law now heading to the Judicial Council and prompted the Rev. J. Phillip Wogaman — about to celebrate the 60th anniversary of his ordination — to turn in his clergy credentials.

Conferences experienced the strains of the homosexuality debate in other ways. The South Carolina Annual Conference saw a proposal for the conference to disaffiliate from The United Methodist Church. South Carolina’s Bishop Jonathan Holston ruled the resolution out of order, but like all decisions of law by bishops, this ruling is heading to the Judicial Council for review.

Bishop Gregory V. Palmer, a Way Forward Commission member and leader of the West Ohio Conference, urged church members to look for what they hold in common.

“My friends, we’ve got to shorten the list, in all our relationships, about what are the deal breakers and decide what are the things that will hold us together,” he said. “This is the United Methodist way.”

One social issue where United Methodists seem in broad agreement is in following the biblical call to welcome the migrants in their neighborhoods.

At least 17 annual conferences, representing all five U.S. jurisdictions, passed resolutions in support of the rights and dignity of immigrants. In some cases, United Methodists advocated a change in state or U.S. policy to better extend hospitality to the sojourner. 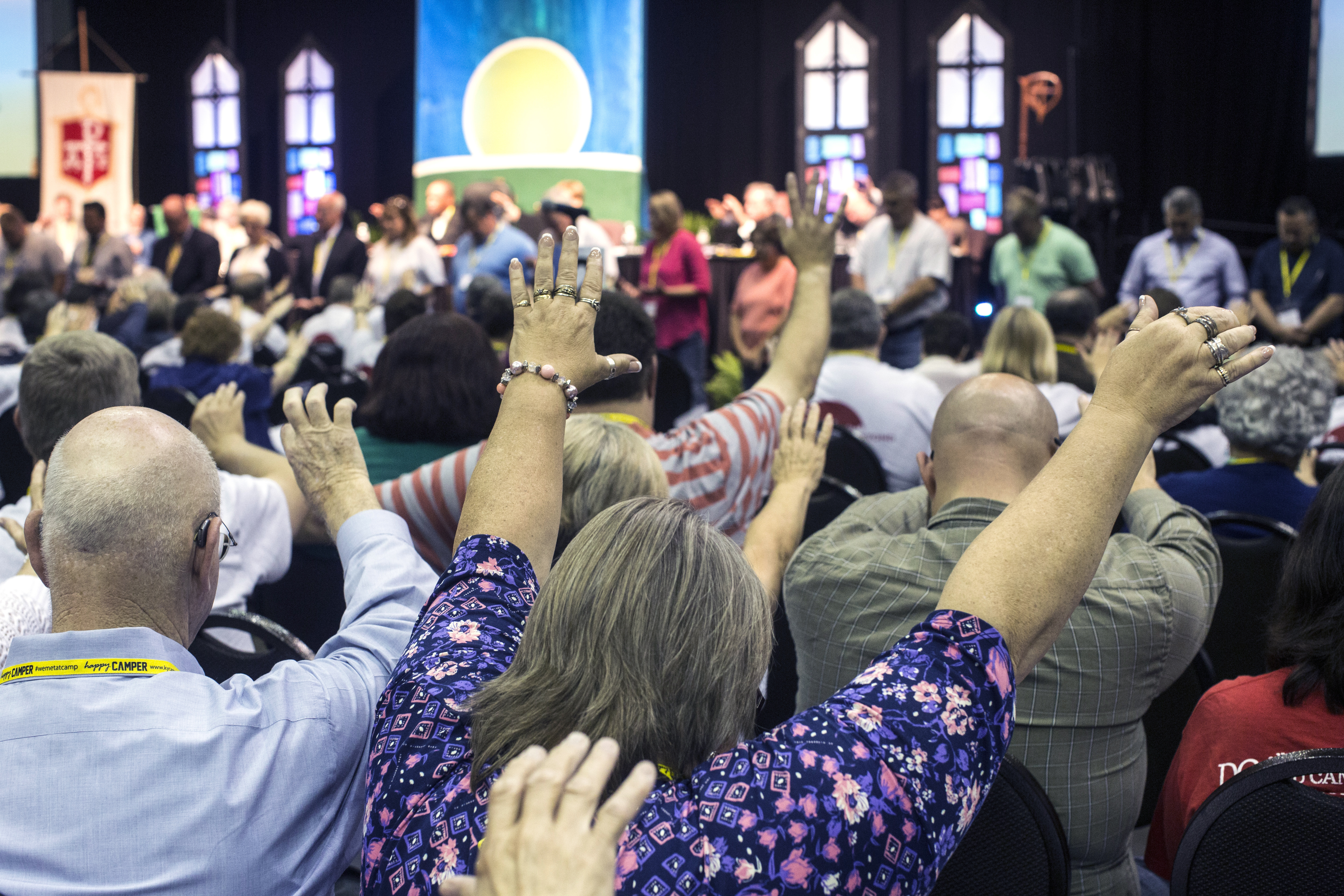 United Methodist News Service has been posting annual conference reports as it receives them. To see the reports, visit www.umc.org/ac2017.

The United Methodist Board of Church and Society has tracked annual conference actions concerning the rights of migrants. To the agency’s report, visit here.

For example, Alabama-West Florida Conference members called on their state leaders to support unaccompanied migrant children. The Florida Conference urged its state to make drivers’ licenses available to all Florida drivers regardless of immigration status.

The Great Plains Conference called on policymakers to “accept refugees and grant asylum based on the need of those seeking our help … and not based on how a person might benefit the United States.”

The New England Conference declared itself in solidarity with families regardless of their immigration status or documentation. The Oregon-Idaho Conference encouraged all churches to educate and equip their members to provide hospitality and to migrants and refugees. The South Carolina Conference rejected any efforts to ban Muslims from the United States based on religion.

The Wisconsin Conference went even further, calling upon the U.S. government to cease arrests, detainment and deportation of undocumented immigrants until the nation passes immigration reform.

United Methodists took stands on many other issues as well. Here are just a few examples: The Arkansas Conference resolved to promote adoption and foster care; the New Mexico Conference committed to environmental stewardship, including the goal of becoming Styrofoam-free; and the Oklahoma Indian Missionary Conference offered its unanimous support for the United Nations International Year of Indigenous Languages in 2019.