The Northern Illinois Conference on the evening of June 4 commissioned an openly transgender individual as a provisional deacon.

The United Methodist Church has ordained transgender clergy before. However, the Rev. M Barclay is the first openly “non-binary trans person” to become a United Methodist deacon, according to Reconciling Ministries Network. Non-binary means Barclay identifies as neither male nor female but as gender neutral.

Barclay — who uses singular they pronouns — serves as director of communications at Reconciling Ministries Network. The unofficial United Methodist group, based in Chicago, advocates for full inclusion of LGBTQ people in all aspects of church life.

“For so long, I’ve longed to be a pastoral presence in the world — and certainly you can do that without a collar — but we have ordination for a reason, and part of that is that I can publicly identify as a pastor now,” Barclay said.

“I know it’s not particularly common in The United Methodist Church, but I intend to wear a collar every single day because for a person like me to navigate society in a collar provides some profound and urgently needed pastoral opportunities, particularly for queer and trans people.”

The United Methodist Church has no official position on the ordination of transgender individuals. The Book of Discipline, the denomination’s governing document, declares all people are of sacred worth but states that “the practice of homosexuality” is “incompatible with Christian teaching.” Since 1984, the Discipline has prohibited the clergy candidacy, ordination and assignment of “self-avowed practicing homosexuals.”

Bishop Sally Dyck, who leads the conference, celebrated all who were ordained or commissioned June 4.

“While M’s journey over the last few years has included gender identity, all of those who were commissioned or ordained on Sunday have been on some kind of journey that has brought them to new places of faith, life and relationships,” Dyck said.

“Likewise, I hope the church will find itself at a new place in the near future when it comes to full inclusion. That said, M and the other candidates for commissioning and ordination are all a part of the church’s witness and outreach to people who need the good news of Jesus Christ.”

Conference boards of ordained ministry evaluate clergy candidates. At each annual conference clergy session, clergy members have the final vote on who joins their ranks.

The Rev. Danita R. Anderson, chair of the Northern Illinois board, said her group found all the conference’s potential new clergy this year “to be outstanding candidates and recommended all of them without hesitation to our clergy session.”

The commissioning and ordination service comes less than two weeks after the Northern Illinois Conference board of ordained ministry responded to a ruling on ordination requirements by the denomination’s top court, the Judicial Council.

Last year, the board made public that it did not consider sexual orientation and gender identity in evaluating clergy candidates. In April, the Judicial Council instructed boards of ordained ministry to examine all qualifications of clergy candidates — including whether they practice “fidelity in marriage and celibacy in singleness.” The church defines marriage as solely between a man and a woman.

On May 23, the board announced in response that it would continue to follow the procedures for interviewing candidates as laid out in the Discipline. The board also said it would form a task force to review its procedures and policies.

“I answered with integrity that I can uphold,” Barclay said. 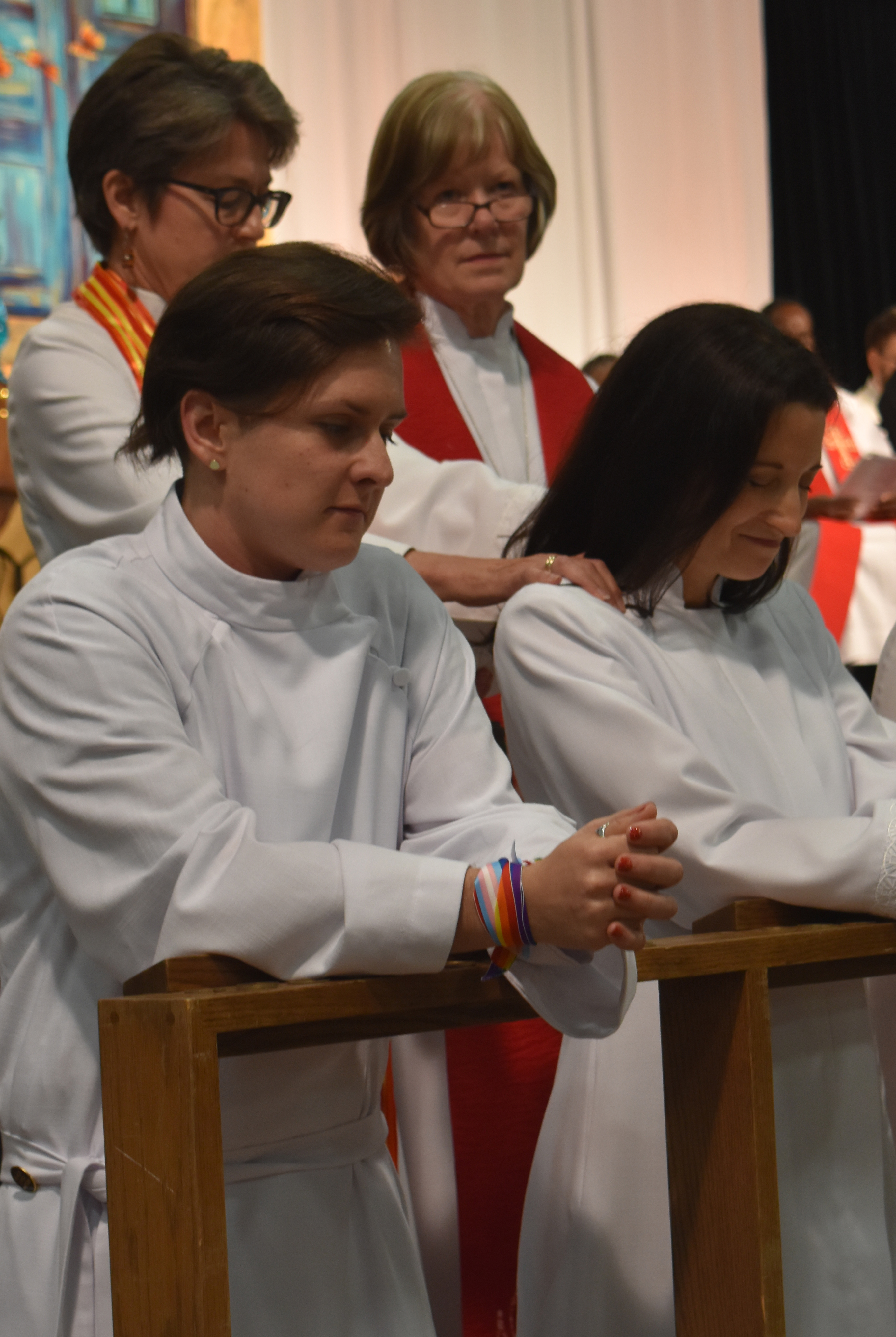 The ordination process for the Rev. M Barclay, at left, continues with the provisional deacon facing another evaluation of clergy credentials again in 2019. Photo by Anne Marie Gerhardt, Northern Illinois Conference.

Barclay sees sexual orientation as “completely separate from gender identity,” and identifies as queer or bisexual.

Good News, an unofficial United Methodist group that advocates for maintaining church teachings on homosexuality, has never made a definitive statement on transgender clergy.

However, the Rev. Thomas Lambrecht — Good News’ vice president and general manager — said most in the group likely would maintain that people “ought to live in accord with their biological gender.”

“We would of course wish to welcome transgender people into our churches and offer them the ministry of the church,” he said. “We would probably draw the line at leadership, seeing transgender persons as not qualified for leadership (either clergy or lay).”

He added that he believes much of what leads people to want to be the opposite gender is driven by gender stereotypes. Release from these cultural expectations “would free many persons to remain in their biological gender while finding a personally comfortable way to live out that gendered reality in their own lives,” Lambrecht said.

In Barclay's case, Lambrecht said, "it is premature for the Northern Illinois Annual Conference to move ahead to commission M Barclay, given the present state of knowledge and the questions her commissioning will raise in the minds of many faithful United Methodists."

Not everyone fits into the box of one gender, Barclay said, noting that other cultures have recognized more than two ways to be gendered.

The new provisional deacon previously identified as a lesbian but came to identify as a “non-binary trans” individual while investigating how to be a better ally to transgender individuals.

“For me, once I was exposed to the reality of non-binary gender, it was for the first time recognizing who I am,” Barclay said, “and what made sense for me in how I carry my body, how I explain myself to the world and how I know myself to be internally. It’s certainly not man nor woman.”

Barclay’s journey to commissioning also has been a long one that at one point resulted in a case before the Judicial Council. Barclay began the ordination process in 2006, before coming out as queer or transgender.

In 2013, Barclay came out as a lesbian in a partnered relationship to the district committee on ordination, which nonetheless recommended Barclay to the board of ordained ministry for commissioning.

The board, in what was then the Southwest Texas (now Rio Texas) Conference, removed Barclay from the ordination process without an interview. The board cited church law restrictions against “practicing” gay clergy. But the Judicial Council eventually affirmed a ruling by the conference’s bishop that the board had erred in its process and Barclay must get an interview. In May 2014, Barclay got that interview and the board subsequently voted against recommending commissioning.

Barclay afterward went to work for Reconciling Ministries Network and continued to feel called to ordained ministry. The commissioning now allows service to others with “my whole self,” the deacon said.

Barclay said the commissioning is “a sign that the church wants to move forward.”

“The church doesn’t want to be associated with discrimination,” the new provisional deacon said. “And I think the church recognizes that, especially after doing the harm that we continue to do, we desperately need trans and queer pastors to help people heal.”

Barclay’s process to full ordination continues after commissioning with the provisional deacon facing evaluation of qualifications again in 2019.