By an overwhelming majority, the Greater New Jersey Conference in a special session voted to allow United Methodist churches to decide how to include and affirm LGBTQ people in every aspect of ministry while still allowing congregations the right to agree to disagree.

Churches can also create covenants about other mission priorities, or choose not to have a covenant at all.

The vote on the 10-point proposal, by a show of voice and hands, came just eight months after a special General Conference passed legislation affirming the church’s current bans on ordaining LGBTQ clergy and officiating at or hosting same-sex marriage and strengthening penalties for violations. Conference officials estimated 80 percent of those present at the special annual conference voted for the proposal, which came from the report submitted by the conference’s Way Forward Team.

Bishop John Schol, episcopal leader of the conference, told the Oct. 26 special session that he chooses to be a pastor of all United Methodist congregations. He vowed he would not forward complaints for trial concerning LGBTQ people’s right to marry, seek ordination or for pastors who perform same-sex unions. 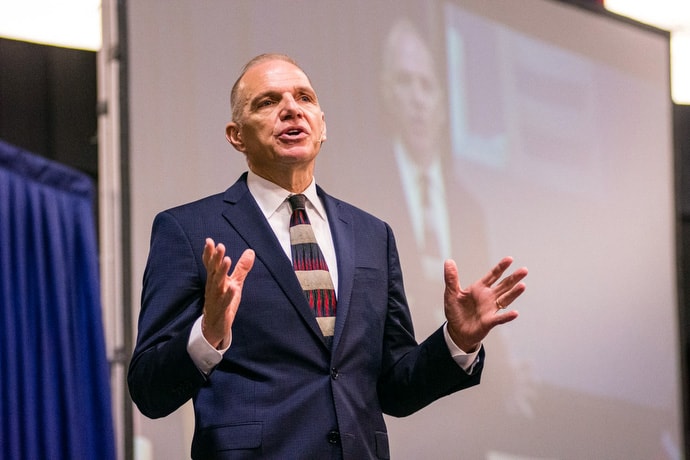 Bishop John Schol tells delegates that “The time has come again for us to be bold and sensitive, to be courageous and humble, to be convicted and searching,” during the special session. Photo by Corbin Payne.
“I will not participate in the ongoing harm and division of our church. I will not participate in excluding faithful United Methodists, faithful and fruitful LGBTQ United Methodists from serving God. I will not prevent caring, loving LGBTQ people who in the United Methodist tradition want to enter into a covenant with God and one another,” he said in an emotional episcopal address.

Five requests for rule of law came from the floor of the session and are under consideration by Bishop Schol:

• Can the Way Forward Report be implemented without being affirmed by the vote of delegates to a meeting of the conference?

• Is the motion to affirm Schol’s declaration and the Board of Ordained Ministry’s declaration a violation of multiple paragraphs of the Book of Discipline and Judicial Council decisions?

• Should the legislation be declared null and void because it is in contradiction with numerous segments of The 2016 Book of Discipline as amended by the actions of the 2019 Special Session of General Conference?

• Does the Greater New Jersey conference have power or authority to make a decision for the local churches that violates the laws of The United Methodist Church?
The Board of Ordained Ministry has also declared it will not screen people from answering a call to ministry based on their sexuality or gender.

The conference actions reject the Traditional Plan, passed 438-384 by the denomination’s top lawmaking assembly. In the months since, some United Methodists have expressed relief at the outcome while others have announced plans to resist. Also, multiple proposals for dividing the church along theological lines have been developed in the U.S.

There were five challenges to the legality of the Way Forward Team’s report, questioning  the conference’s authority to act and whether the proposals violate church law. Schol is considering those challenges.

The Rev. Leo Park, Korean United Methodist Church of South Jersey, said he objected to the covenant proposal because it violates the Book of Discipline and the Bible.

“It is not about culture … or even sexuality, it is about honoring the Bible and keeping the vows we made at ordination.”

The Way Forward Team said the covenants allow the conference to move past the current struggles over how The United Methodist Church accepts or rejects ministry with LGBTQ people.

However, congregations are not required to enter into a covenant, said the Rev. Sang Won Doh, convener of the Way Forward Team.

The plan provides a path for congregations that want to leave the conference or affiliate with other Wesleyan denominations. Churches can also develop covenants about other missional commitments that empower contextual ministries of justice, mercy and peace.

Doh said in focus groups, listening sessions and surveys, more than 800 United Methodists in Greater New Jersey clearly communicated they wanted to continue in ministry together and did not want to separate into groups. 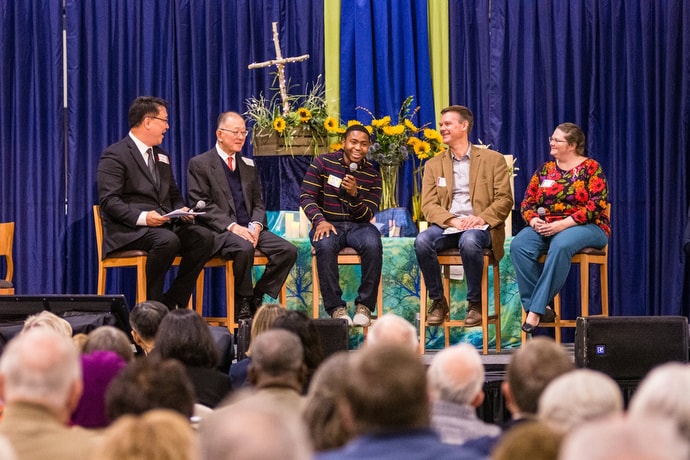 Zach Holder (center) tells the conference how the Way Forward team agreed on recommendations that encourage congregations to develop covenants to be in ministry that are authentic to who they are called to be. Joining Holder, from left: the Rev. Sang Won Doh, Michael Hoon Yan and the Rev. Tom Korkuch and the Rev. Amanda Hemenetz. Photo by Corbin Payne.
“When asked, ‘What challenges are your congregations facing?’ most answered that their biggest concerns included mission, worship attendance and finances,” he said. “Those who responded with concerns over ministry with LGBTQ persons were concerned about divides within their own congregation and with their connection to the denomination.”

1. Continue to resource congregational leaders to make disciples and grow vital congregations to transform the world.

2. Shepherd all congregations into the future recognizing our diversity of culture, ethnicity and belief.

3. Create sacred space for congregations to thrive in their context.

4. Seek to eliminate harm to the people in our communities and congregations.

6. Make available trained facilitators to assist interested congregations with conversations about ministry with LGBTQ persons and to develop covenants about ministry with the LGBTQ community as well as other missional commitments that empower contextual ministries of justice, mercy and peace.

7. Honor congregational covenants, particularly the cabinet when making appointments and working with congregations.

8. Engage someone to coordinate and resource the covenanting process for congregations.

9. Make training and coaching available, particularly in congregations where there are differences concerning human sexuality, so that each person can see that others matter just like they do.

10. Provide a web page for congregations to communicate that they are a welcoming congregation who affirms the full inclusion of LGBTQ people so that people from the community, especially LGBTQ people, can locate a congregation to worship with and participate in ministry.

Doh said many congregations had not had conversations about the decision made by the 2019 General Conference. Others reported their congregations were split 60-40 or 50-50 on the issue of LGBTQ inclusion.

There is no action to be taken if a congregation does not develop a covenant. The covenanting process is fully voluntary,” he added

Facilitators will be available to help congregations form covenants. The conference will be prepared to facilitate 60 congregations at a time.

The report asks congregations to use the following questions to guide the process:

Schol was asked why the conference didn’t wait until the 2020 General Conference meets.

“General Conference can’t fix the challenges that face our denomination,” he said. “No vote or piece of legislation will change people’s hearts and minds. The United Methodist Church is global and diverse. A dominant centralized government does not work. We need a polity that is focused on the mission globally and organization and practices identified locally. We remain committed to being loyal to our foundational mission of being disciples of Jesus Christ for the transformation of the world,” Schol said.

Asked about the covenant proposal’s similarities to the One Church Plan that failed at the special General Conference, Schol said that plan was a General Conference solution. “These matters are better identified and worked through by annual conferences,” he said.

Meanwhile, the United Methodist Judicial Council has an oral hearing scheduled Oct. 30 on the implementation of the Traditional Plan. The Council of Bishops requested a declaratory decision on “the constitutionality, meaning, application and effect of certain petitions adopted as the Traditional Plan,” specifically asking five questions about the effects of the plan “that need to be addressed for the benefit of The United Methodist Church.”

“The team also recognizes that congregations act on their convictions to be in ministry with God, one another and the community, including being fully inclusive with LGBTQ people,” she said. “Our goal is to work with our congregations to support their efforts to thrive, to bless one another and to serve the mission and ministries that united us.”

Doh said the team’s report is based on the philosophy of agreeing to disagree.

“People do not agree with everything in the report, but they agree to move forward in this way for the good of the mission of The United Methodist Church.”

The Rev. Virginia Cetuk, Princeton United Methodist Church, moved to add an amendment to the report that affirmed Schol’s vow to not bring complaints to trial and the Board of Ordained Ministry’s vow to not screen candidates for ministry based on their sexuality or gender.

Cetuk said those actions remove “the stone cold fear” from pastors who have to choose between offering love and justice to all or their livelihood.

The gathering passed the report by an overwhelming majority. 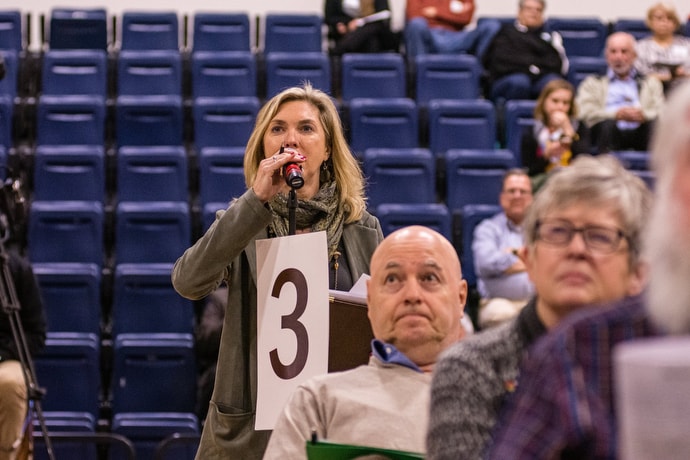 The Rev. Beth Caulfield, president of the Greater New Jersey Wesleyan Covenant Association, submits a question of law during the special session. Photo by Corbin Payne.
Gilbert is a news writer for United Methodist News Service. Contact her at (615) 742-5470 or [email protected]. To read more United Methodist news, subscribe to the free Daily or Weekly Digests.