Friends, family and his beloved church community are coming together to make sure Jake Sherrell gets his flowers while he yet lives.

Sherrell, 96, runs North Nashville’s Bel-Aire Unisex Salon where he’s brought to Christ hundreds who have sat in his barber chair.

He opened Bel-Aire in 1957 and can still be found there most days, cutting hair and sharing the Gospel, despite his stage 4 cancer diagnosis.

On a recent Wednesday morning, more than a dozen well-wishers crowded into the barbershop to celebrate Sherrell’s impact on the community, sharing stories and singing favorite hymns.

“You know the saying is, ‘give me my flowers while I live,’” said Rosa Sherrell, Jake’s wife of 21 years, calling to mind the hymn by gospel artist James Cleveland. “This is gonna bless him.” 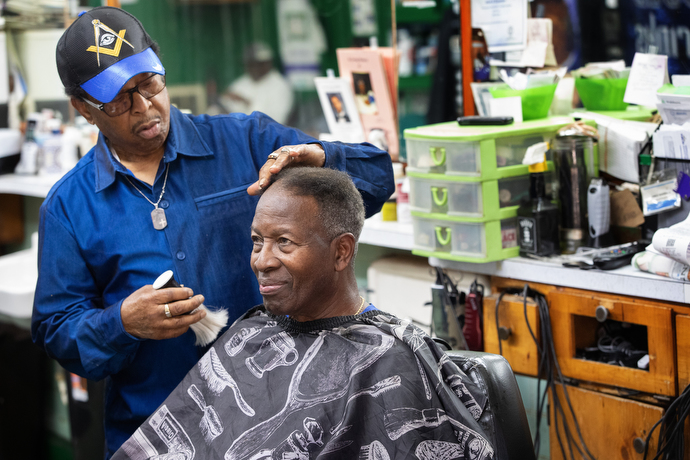 Jake Sherrell puts the finishing touches on a haircut for the Rev. Robert Stout at the Bel-Aire Salon. Stout, the pastor of Berean Baptist Church in Nashville, said Sherrell has been cutting his hair for 30 years.

Jake Sherrell, a member of Gordon Memorial United Methodist Church for almost 80 years, is among the winners of the Harry Denman Evangelism Award for 2022. Each year, annual conferences and the Foundation for Evangelism recognize one youth, one clergy and one lay person in each conference.

Pointing to a picture of his church hanging above the shop’s front door, Sherrell said, “If you come in here and want me to cut your hair, we’re going to bring up in conversation somewhere down the line how you feel about joining this church.

“It just got to be a part of my life,” Sherrell said. “I felt it so strong that I could draw people to Christ.” 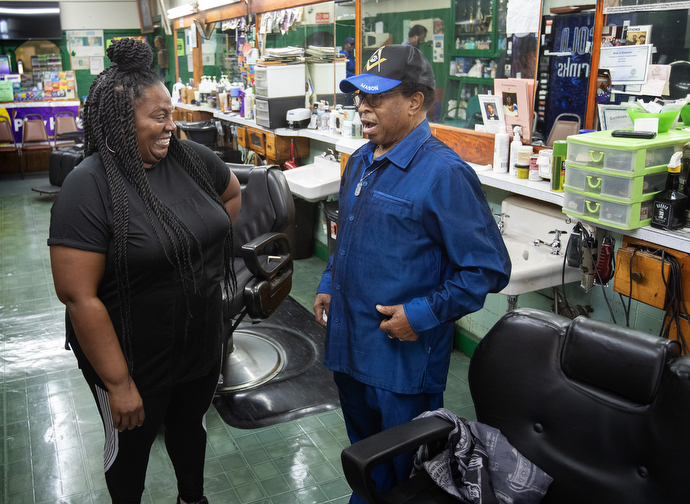 Tonya Bosley shares a laugh with her father, Jake Sherrell, at the barbershop where they both work.

Sherrell’s daughter, Tonya Bosley, came to work in the barbershop and hair salon in 2001 “with the intention of staying two weeks,” she said.

She jokingly describes her father as a “part-time gangster” who knows how to relate to young people in the working-class neighborhood shared by the barbershop, Gordon Memorial and Martin Luther King Jr. High School.

“He’s led, protected and guided so many of our Black men,” she said.

“You come in this place, you’re gonna get some ‘act right,’” she said, speaking of the steady guidance and street-smart wisdom Sherrell has dispensed over the decades. Among those who have benefited from that counsel is Sherrell’s grandson.

“He has been exemplary in my son’s life,” Bosley said. “My son can come to him and talk about anything.” 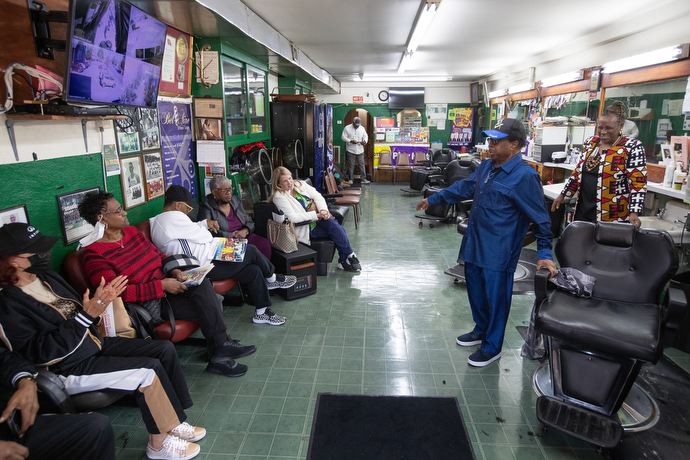 Jake Sherrell leads well-wishers in “Leave It There,” a hymn by Charles A. Tindley, at his barbershop.

Gordon member Eloise Abernathy said Sherrell is taking the word of God out to the people.

“People aren’t always going to come to the church,” she said. “He made sure that he lived it, exemplified it.”

Sherrell’s pastor, the Rev. Paula Smith, joined the gathering and led a prayer for him.

“We celebrate that although, Lord, his health may be failing, his mind and his spirit are still on fire for you, dear God. For he has said that as long as there’s breath in his body, he’s going to be praising his God and making a difference for the kingdom. And so, God, we just ask that you will continue to give him strength. Let your joy be his strength, God. We ask that you gird him up on every side,” she prayed. 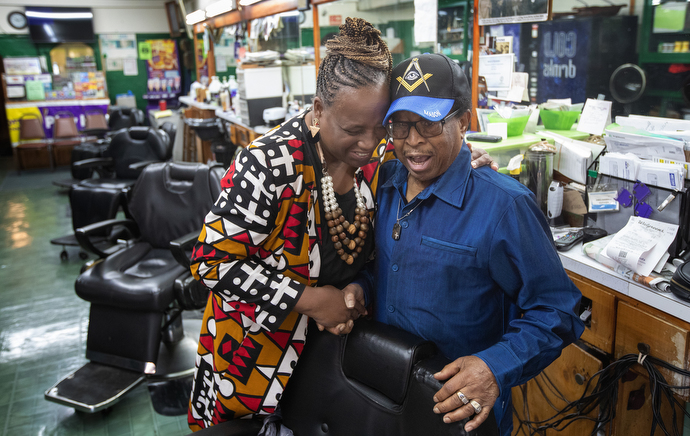 The Rev. Paula Smith embraces Jake Sherrell while they sing hymns together at Sherrell’s barbershop. Smith is pastor of Gordon Memorial United Methodist Church in Nashville.

Smith explained the significance of Sherrell’s ministry in her nomination letter for the Denman award.

“The barbershop in African American culture has been more than just a place to get a haircut and a shave. It has been a refuge for Black men to escape from discrimination and humiliation. It is an intergenerational space where Black men and boys can congregate and connect to talk freely about the challenges and inequalities that are a part of their everyday lives,” she wrote.

“Jake’s barbershop has been that refuge for over 60 years. Located in North Nashville, an area long plagued by systemic racism, environmental injustice, high poverty and high incarceration rates, Jake’s barbershop is a place where everybody is somebody.” 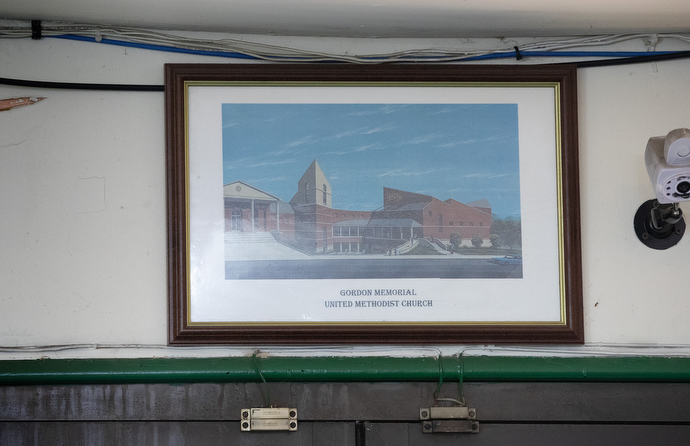 A photo of Gordon Memorial United Methodist Church hangs above the front door of Jake Sherrell’s barbershop. “If you come in here and want me to cut your hair, we’re going to bring up in conversation somewhere down the line how you feel about joining this church,” he said.

“He raised me in this barbershop. Ever since I was 9 or 10 years old, I’ve been coming around through here. I grew up in the projects, right across the street,” he said. “This man always looked out for me. He kept me on the right path. He got on me when I was doing wrong. And when I was doing right, he was proud of me. I messed up one time and he got on me about it and said that’s not the life to live. He straightened me out. I’ve been straight ever since.”

Sherrell said he came to Christ himself through the influence of his grandfather and by way of the mourner’s bench.

Associated with the early Methodist movement, the mourner’s bench was located near the front of the church and was the place “you would go and sit to feel sorry for your sins, to repent, to have the new birth, or to rededicate yourself to Jesus,” said Mark Shenise of the United Methodist Commission on Archives and History in a video. 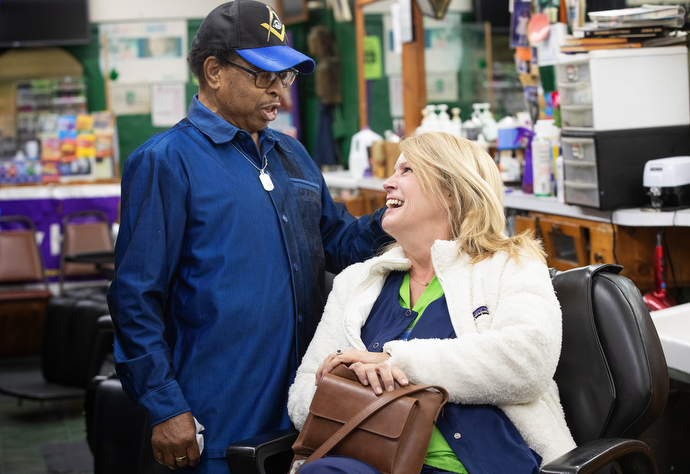 Jake Sherrell teases Meredith Portwood about the possibility of him cutting her long, blonde hair at his barbershop and hair salon. Portwood, one of Sherrell’s hospice nurses, had stopped by the shop along with other community members to wish him well.

“My grandaddy was a real strict Christian,” Sherrell said. “He made us get on the mourner’s bench. I sat there because I knew if I got off, he was gonna hit me with that stick.”

He recalled the night his grandfather took him to church and he saw a woman “just praying and praying on a Monday night,” Sherrell said. “And I thought about that. I’m gonna try what she was doing. And Tuesday night I went back and I got on that bench and I started praying.

“Something got ahold of me that night and it ain’t been the same since,” he said. “I was 13. From that day on, God had his hands on me.” 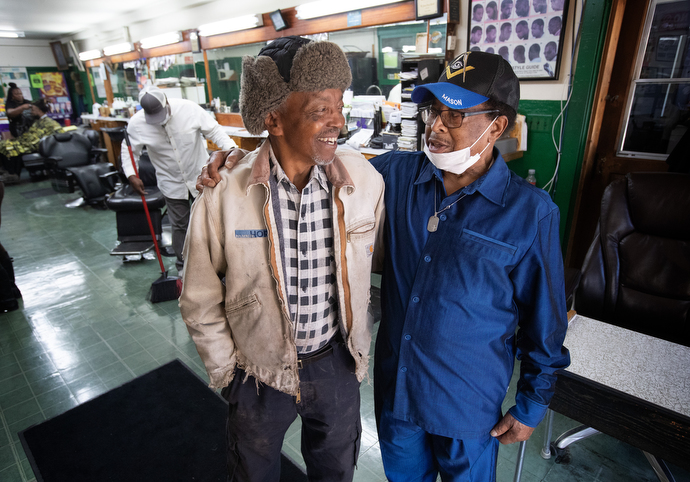 Matthew Jobe (left) visits with Jake Sherrell at Sherrell’s barbershop. The good friends both are longtime members of Gordon Memorial United Methodist Church. Jobe, a certified lay speaker at the church, was the first recipient of an evangelism award created by Gordon Memorial in Sherrell’s honor.

Sherrell has been a member at Gordon since he was 17. He had been attending Bethel African Methodist Episcopal Church while staying with an uncle. When he moved in with another uncle in North Nashville, it was too far away to walk. 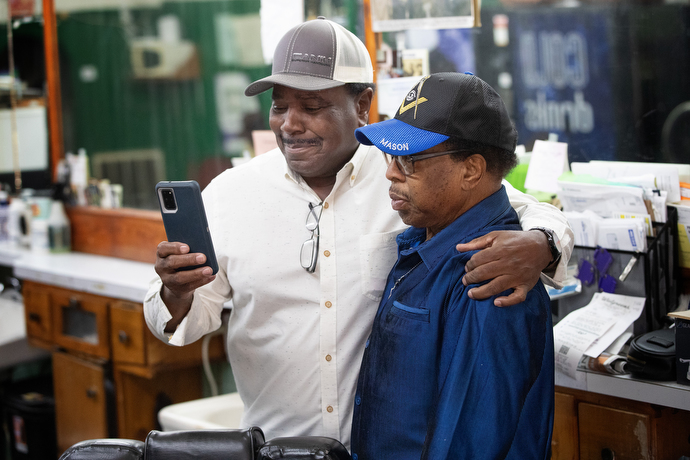 Nathan Marsh (left) shares a video with Jake Sherrell at the barbershop where they both work. “I’ve been with Jake for the last 35 or 40 years,” Marsh said. “He’s been a mentor to me. I love working with him. He’s a cousin. He’s a mentor. We love him. The whole neighborhood loves him.

“He’s an ambassador for Christ,” Bowen said. “And there ain’t no shame in it. It’s just what he does. If you come around Jake, he’s gonna talk about Jesus. And if you got anything going on in your life, he’s gonna tell you the answer is Jesus.”

Smith concluded her prayer while supporters gathered around Sherrell, laying hands on him while he was seated in his barber’s chair.

DuBose is staff photographer for United Methodist News. Contact him at (615) 742-5470 or [email protected] To read more United Methodist news, subscribe to the free Daily or Weekly Digests. 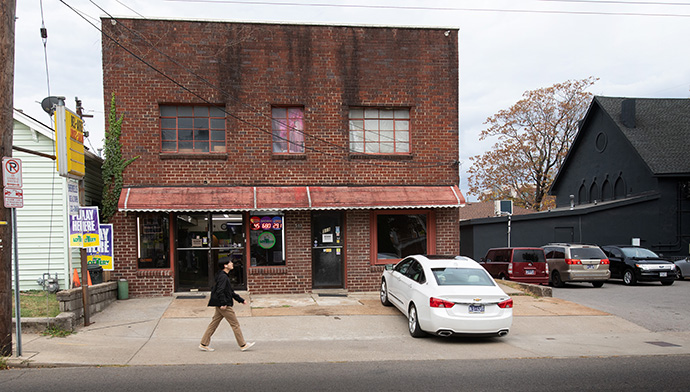