Communications specialists with United Methodists and other international relief agencies are putting their heads together on how to switch rapidly from prevention mode to response mode in case of a further Ebola outbreak in additional West African countries.

The Ebola outbreak in West Africa has infected more than 17,000 people and more than 6,000 have died, mostly in Liberia, Sierra Leone and Guinea.

BBC Media Action and Côte d’Ivoire United Methodist Health Board looked at the challenge recently in a workshop on emergency communication. BBC Media Act is BBC’s international development charity that works to use media and communication to reduce poverty, improve health and support people in understanding their rights. The group’s workshop, Nov. 26-27, brought together Ivorian government officials, international nongovernmental organizations and key media, three essential links in the chain to fight Ebola.

The objective of the workshop was to share information that would help the communicators make the switch from prevention to response mode if needed. Robert Powell and Jacqueline Dalton, both Humanitarian Communication specialists, conducted the workshop.

A journalist at Radio Denguélé, Camara Lanciné,  said he was proud of his communication role in the region of Odienné, which is 867 kilometers (539 miles) from Abidjan. But when the Ebola crisis broke out in neighboring Mali, he faced new problems. Because the border with Mali is so open, the population turned to his radio for answers. Lanciné consulted the local health officials but they could not provide him with the information he needed.

The workshop emphasized practical advice and works based on interactive methods. It targeted improving two-way communications with the most vulnerable population during the stage before there is an actual Ebola case and preparing people to produce appropriate communication responses if Ebola does arrive.

Powell and Dalton urged the participants to inform positively and communicate hope. They said the Ebola disease is not inevitable and that a patient supported in an early stage can be cured. 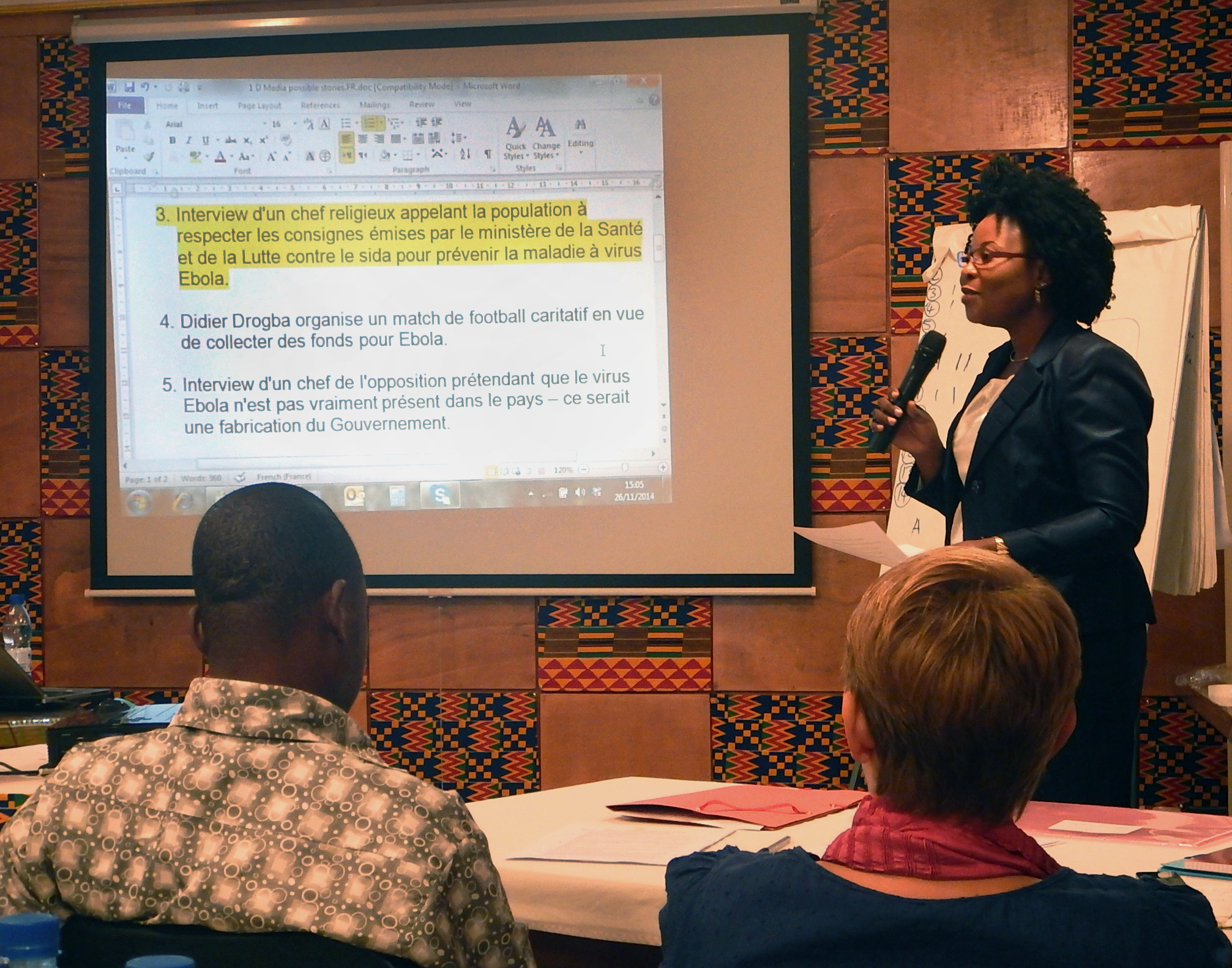 The workshop looked at how synergy among governments, NGOs and news media is crucial when crisis response is needed. The Côte d’Ivoire Center of Information and Communication develops and supervises the communication plan, but the NGOs have a strong presence in regions that share borders with affected countries, in this case Guinea, Liberia and Mali.

At the request of the government, these NGOs are remapping to be present in other parts of the country and media give voice to their activities on the fields.

“If we have the same information and we all speak with one voice at the same time, I think this is a good strategy for the fight,” said Franck Kodjo, communication manager for Red Cross — Côte d’Ivoire.

Radio’s journalists like Camara accounted for two-thirds of the participants and represented radio stations along the borders not only with affected countries but also with Ghana.

“We chose the media participants based on which media covers the most vulnerable areas of Côte d’Ivoire as far as possible introduction of Ebola was concerned” Powell said.

There were also representatives from the Ivorian government, was well as from radio and television and some mainstream media based in Abidjan.

Christian and Muslim radio were not forgotten in the process. Faith organizations are a good way of spreading messages to the congregations. “We worked basically with the largest faith groups and those who like The United Methodist Church showed interest in wanting to do something in communicating better on Ebola,” Powell said.

Hervé Atta, a journalist from Radio Akwaba at Noé, said he thinks he has the necessary tools to provide information without panic if Ebola starts at the Ivorian side of the border with Ghana. The day before the workshop, Professor Ehui Eboua, an infectious and tropical diseases specialist, trained 10 United Methodist radio staff on communication about Ebola.

“No country is immune. Only sensitization, community mobilization and compliance with preventive measures can curb this epidemic” he explained. “The Voice of Hope,” or Radio Methos, the United Methodist radio station in the Côte d’Ivoire Conference, is engaging in a four-month intensive communication campaign around Ebola. The campaign will include training, programs and production of commercials.

The campaign was made possible through an $18,020 grant from the United Methodist Committee on Relief to the Côte d’Ivoire United Methodist Health Board. In addition to communication, the grant covers equipment for Dabou Methodist Hospital to take care of Ebola cases.

Broune is the communicator for The United Methodist Church in Côte d’Ivoire.