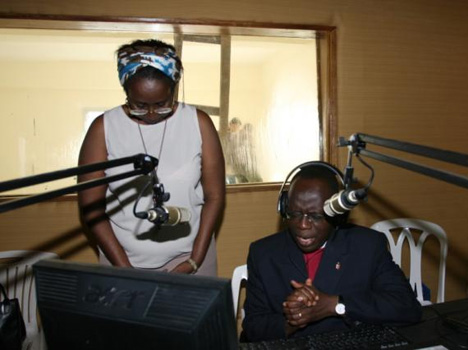 People in this West African country are receiving messages of hope along with information to enhance their lives through a new radio station launched by The United Methodist Church.

Described by the church as “The Voice of Hope,” the station first hit the airwaves Dec. 20 with a test broadcast of songs in French. 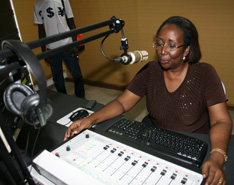 “Glory to God,” said Edouard Okoué, coordinator of the church’s radio project, as he listened to the music through a cell phone. The phone was passed around a group of United Methodists gathered at Okoué’s home.

It was an emotional moment, as members of the group laughed with delight or simply smiled through eyes brimming with tears.

Lydie Acquah, hired as station director in November, described her feeling upon hearing the broadcast in one word: “Joy.”

A longer transmission followed on Dec. 24 with a Christmas Eve worship service, greetings recorded by church leaders, and music. The test ended the following day and was scheduled to resume Dec. 28.

“The dream has become a reality,” Boni said in an interview. The radio station will be a way to educate and transform people, and to spread the good news of Jesus Christ across the country, he said.

When he speaks on Jan. 1, he is going to give thanks for all that God has done in 2009 and commit the radio project into his hands, he said.

The launch is a milestone in a process that began 18 months ago with conversations involving the radio station’s four partners – the Côte d’Ivoire Conference, the Texas Annual (regional) Conference, United Methodist Communications and the denomination’s Board of Higher Education and Ministry. 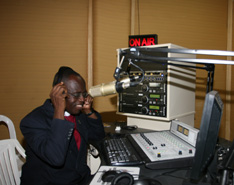 Bishop Boni tries out the equipment at the new station, 'The Voice of Hope.'

The journey has been “very hard,” Okoué said. An auditor at an accounting firm, he has given many hours each week in volunteer time to helping make the station a reality.

Though the equipment installation is complete, construction of the building is still under way. The station is housed behind Jubilee United Methodist Church in Abidjan – the church where the Christmas Eve broadcast originated.

The station will be the church’s biggest communications asset, enabling it to reach villages that otherwise would be inaccessible, said Sam Koffi, an assistant to Boni. “Communication is the key no matter what you do.”

The country is trying to reunify after a long crisis, marked by a five-year war that ended with peace agreements in 2007. The crisis has left people tired and without hope, Koffi said. “The most critical thing this radio is going to focus on is bringing people hope” through health and education programs, he said.

Acquah sees opportunities for disseminating information about topics as diverse as health, agriculture, poverty and the electoral process. She also wants to reach out to youth and women, who are often most affected by poverty.

“My vision is simple but a very strong one,” she said, speaking in French. “…Because of what we suffered during the war, the radio station has both a vision to evangelize and also to work for a rebuilding of a new Côte d’Ivoire.”

The presidential election, expected to occur in February or March, will be an important moment for the country. The radio station will broadcast messages of peace, reconciliation and the importance of accepting the election result, Acquah said.

Stamping out diseases of poverty is a focus for The United Methodist Church, and Acquah said the radio station will sensitize people to the causes of malaria, one of the worst killers of African children. “The radio’s going to be extremely important in information sharing with respect to waging the war against malaria.”

She also noted that the church operates medical ministries and schools and is active in addressing social issues, yet doesn’t talk much about itself. “We have a very exciting Methodist community but one that was somewhat introverted, so the radio station is an opportunity to render this community extroverted.” The church has about 700,000 members in Côte d’Ivoire.

The station is encouraging supporters to leave a message by Jan. 1 to be broadcast on air. The message – a scriptural passage, inspirational quote, personal testimony or comment – can be recorded by calling 1-800-251-4091.

More information on the station is available at www.amplifyhope.org.