As the ongoing COVID-19 pandemic requires social distancing and vigorous cleaning, churches must weigh whether to continue only worshipping online or reopening buildings in limited capacities. Others have begun to move outside.

At Foley United Methodist Church in Foley, Alabama, outdoor worship has been the norm for decades. Since 1951, the church has hosted a Galilean Beach Service for members and vacationing guests every Sunday morning from Mother’s Day to Labor Day.

“This is one of the most evangelistic things we get to do. You get people who aren’t regulars or who have moved away from church and you get a chance to help them hear a message,” he said. 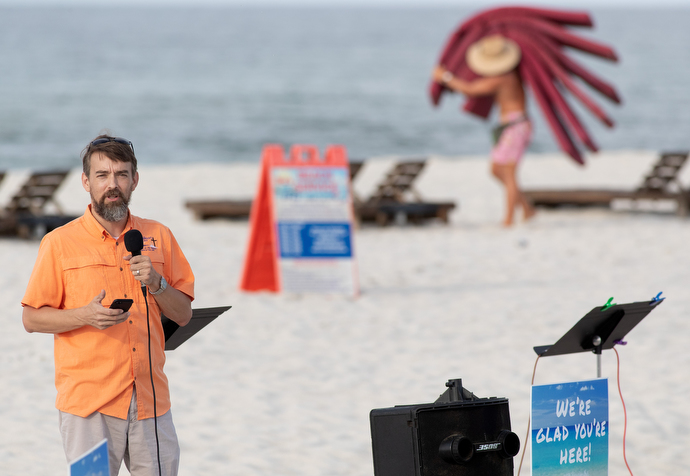 The Rev. Nolan Donald gives the sermon during the Galilean Beach Service while a beach attendant lays out chair cushions in the background. The 7:30 a.m. service is over before most other beachgoers arrive. 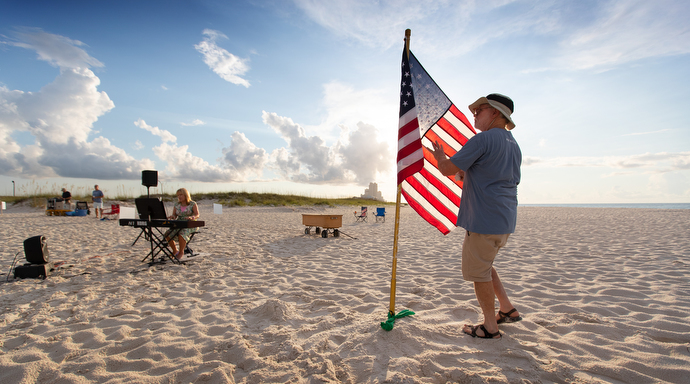 Bob Cristopher unfurls the U.S. flag prior to the Galilean Beach Service while Sherrie Lynn Brewer warms up on the keyboard.
The Rev. John Simonson, associate pastor, said there wasn’t much adaptation required to meet the needs of the current reality. The full choir was reduced to just two or three, online giving replaced the offering and, though they haven’t held Communion yet, it will be done with pre-packaged kits.

“We can still spread out since it’s a big beach,” he said. “Everyone brings their own chairs, so there’s not any cleanup. It’s not like we have to clean the sand.” 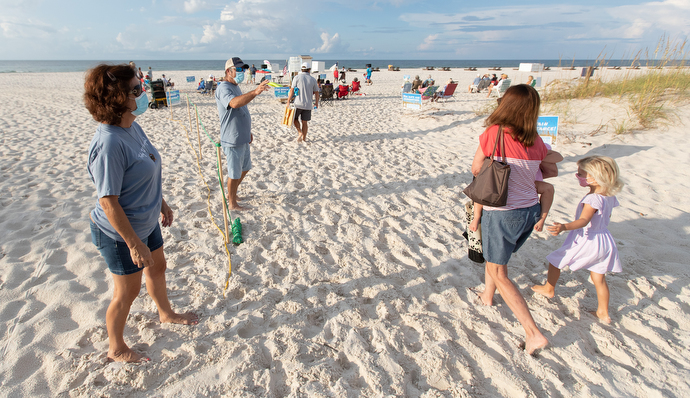 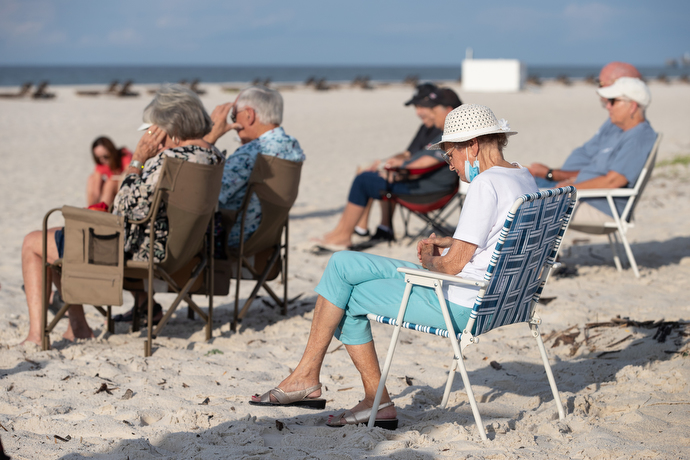 Marion Bethea (front) joins other worshippers in prayer during the Galilean Beach Service. She has regularly attended the outdoor service since 1994.
As its name suggests, Lake Palestine United Methodist Church in Chandler, Texas, is also able to take advantage of being near the water. Having an outdoor amphitheater in its backyard doesn’t hurt.

The amphitheater was built in 2007 as more of a community gathering space. Scout troops and other neighborhood groups had met there, but it had not been used for worship until the pandemic lockdowns began.

The first outdoor service was for Pentecost. Now, the amphitheater has become the church. Each Sunday, in-person worship begins by the lake at 9:30 a.m. 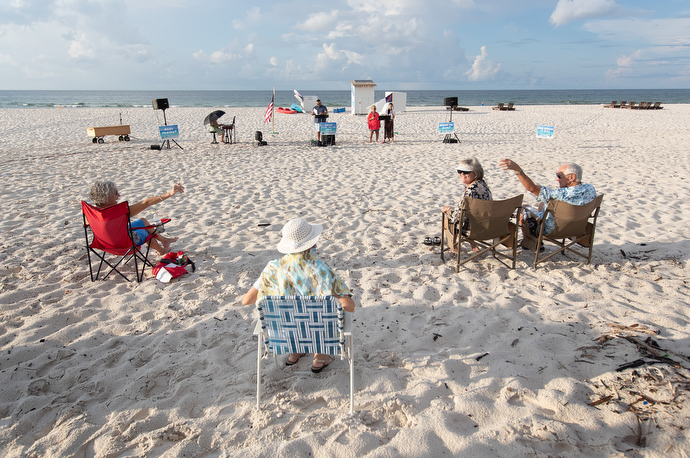 Worshippers greet one another from a distance at the Galilean Beach Service.
With safety in mind, the services are shorter, and members are asked to wear masks and maintain social distancing. Distancing is set at 12 feet apart rather than the usual six feet as an extra precaution. Some have parked on the top of the hill and still enjoyed the sermon from afar. Others have listened from their boats on the lake.

“People can come; they can be casual. They can pull their boat up to attend if they want. It’s meeting people where they are, which is exactly what Jesus does for us.”

As many churches have discovered while putting worship services online, broadcasting and copyright licensing issues are complex.
Churches that have turned to using low-wattage radio transmitters for “drive-in church” should consider legal guidelines before going live. Federal Communications Commission guidelines allow transmissions of less than 1 watt of power or a distance of less than 200 feet to operate without a license. Any broadcast above those limitations operating without a license would be considered illegal.
The Central Texas Conference has created a page of resources for churches using or considering radio transmission.
There are a myriad of different licenses regarding copyright, and each is unique to its area. Basic licenses for churches like CCLI and OneLicense only cover reproduction rights, not the right to broadcast those works. A license for streaming online won’t cover a radio broadcast.
The safest option is probably to only use songs that are in the public domain. In general, works published before Jan. 1, 1925, should be public domain, but Ask The UMC has guidance on this tricky subject.

Though not every church has a beach or lake nearby, many are making use of parking lots or open spaces on their grounds.

Louisiana Avenue United Methodist Church in Lafayette, Louisiana, sits on six acres of land with enough open space for people to sit in their cars and listen to the Rev. Robert E. Johnson Sr. preach. The service is also broadcast live on the church’s Facebook page.

Johnson cited a survey he recently conducted with the congregation that showed only 26% of members felt comfortable returning to the sanctuary.

“So we’ve done this for a month or two now, to give people some kind of normalcy without being in the building,” he said. “We have enough space outside to accommodate more people than we can currently allow in the building.”

Johnson also pastors two smaller churches that he said are able to meet in person in limited capacity, but with Louisiana Avenue averaging 130-150 in worship, that would mean literally turning people away from church, which he is unwilling to do.

“We don’t know who needs on any given Sunday to be healed, to hear that message, to be in the presence of others,” he said. “To turn people away because we’re full is not Christ-like. Can you imagine if Jesus did that to us?”

Each week, one church takes the lead planning the worship, preparing everything that is needed, and including the other congregations. First United Methodist provides the technology for sound, projection and livestreaming. All three churches broadcast the service on their Facebook pages.

"People were enthusiastic and really enjoyed the opportunity to be in worship with others," said the Rev. Greg Kroger, First United Methodist’s pastor. "It went so well some of us thought we would continue the effort."
The first service was June 28 and will continue each Sunday for the remainder of the summer.

Since summer lasts a lot longer in Gulf Shores, Donald said the beach service could run past its usual Labor Day cutoff.

“We may continue the service here a few more months until the weather cools down, or we may move to downtown Foley, where there’s a big park in the center of downtown. Just to make it a little more accessible to our community.” 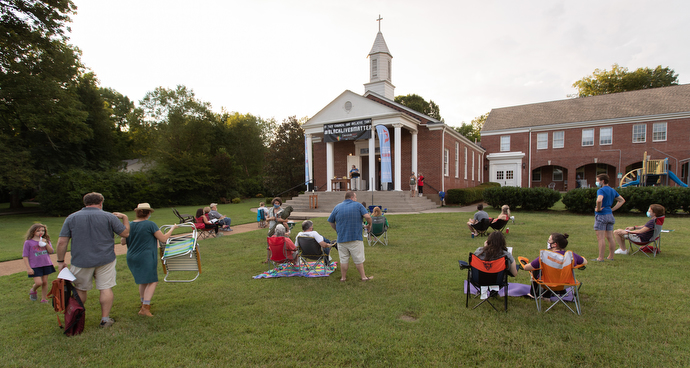 Parishioners gather on the lawn for an outdoor worship and communion service at Glendale United Methodist Church in Nashville, Tenn. 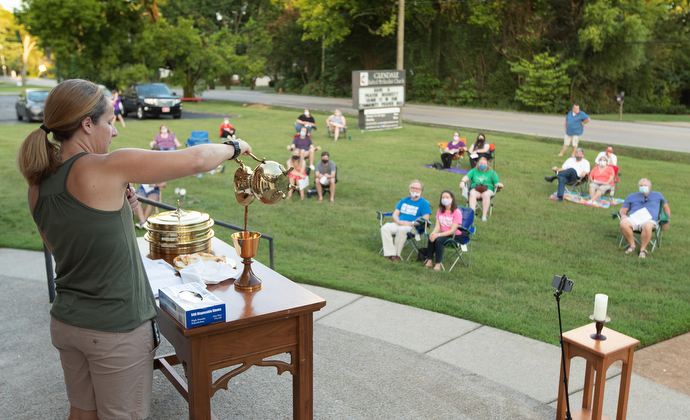 The Rev. Steph Dodge blesses the elements of Holy Communion during an outdoor worship service at Glendale United Methodist Church in Nashville, Tenn. 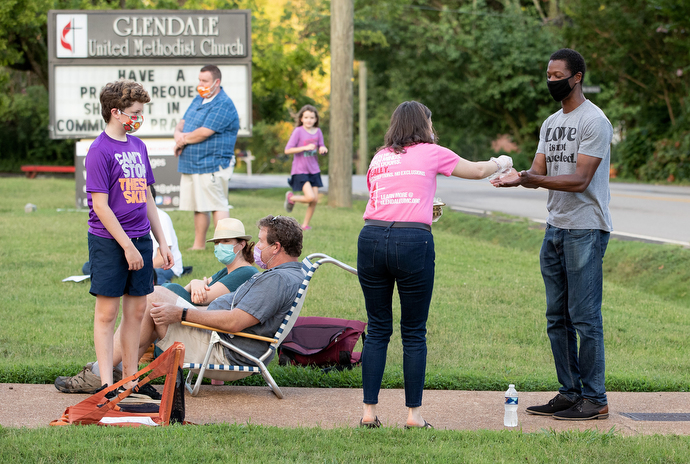 Laura Kreiselmaier serves Holy Communion to James Poland (right) during an outdoor worship service at Glendale United Methodist Church in Nashville, Tenn.
At the beach service, Brian Grantham mentioned a perk that churchgoers in other parts of the country unfortunately don’t get to enjoy.

Grantham was raised in the Foley church and though he is now a member of a United Methodist church in nearby Bon Secour, he still comes back for the scenery. 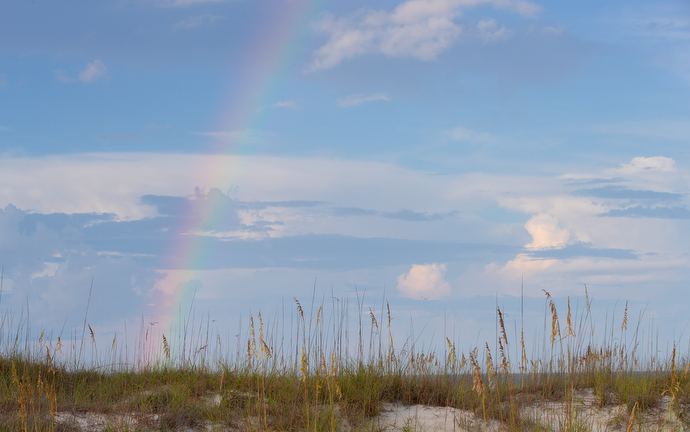 A rainbow arcs across the sky at Gulf State Park in Gulf Shores, Ala., just prior to the start of the Galilean Beach Service.

Butler is a multimedia producer/editor and DuBose is staff photographer for UM News. Contact them at (615) 742-5470 or [email protected] To read more United Methodist news, subscribe to the free Daily or Weekly Digests. Lindsay Peyton, writer for the Texas Conference Cross Connection, and Doreen Gosmire, Dakotas Conference director of communications, contributed to this story.