The deadly Ebola outbreak in eastern Congo that killed 2,277 people is over, the Congolese health minister and the World Health Organization said on June 25.

The 10th outbreak of the hemorrhagic fever in the Congo began on Aug. 1, 2018. It was the second most serious outbreak since the virus was identified in 1976.

Congolese Minister of Health Eteni Longondo said the epidemic was "the longest, the most complex and the deadliest" in the history of the country.” Only the Ebola epidemic in West Africa claimed more lives. That 2013-2016 outbreak killed 11,310, mostly in Sierra Leone, Liberia and Guinea. But even as the 10th outbreak ends, another outbreak has been identified in Mbandaka, Congo. 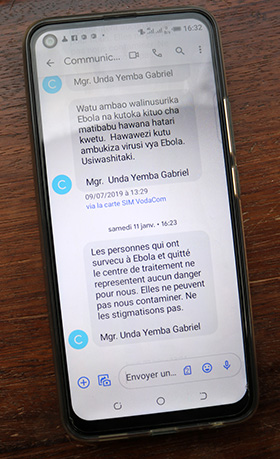 The United Methodist Church sent several text messages each day to educate local communities about what they could do to prevent Ebola. 2019 file photo by Chadrack Londe, UM News.

“The United Methodist Church has done a great job of raising awareness on this disease on community radios, mass awareness, awareness raising by messages via the UMConnect system,” he said.

The epidemic ended just as the country faces the COVID-19 pandemic.

“This is why I call on the local communities to observe scrupulously these measures and also to the teams of health structures, pastors, clergy and laity to be able to continue with awareness activities on barrier measures at all levels,” Lushima said.

East Congo Bishop Gabriel Yemba Unda warned that local communities and even partners should not let their guard down.

"We must continue to sensitize local communities so that respect for hygiene measures can remain in our culture,” Unda said. “This allows us to protect against not only Ebola, but also several other diseases that can be caused by dirty hands."

In addition to sharing health and prevention information, teams of United Methodist volunteers in eastern Congo are also working to combat the stigma Ebola survivors face.

According to the World Health Organization, before leaving an Ebola treatment center, survivors should receive training and advice on possible psychosocial disorders they may face during convalescence.

"Survivors find it difficult to reintegrate because of local communities who believe that they can still contaminate them," Lushima said, adding that community relays are being put in place. Text messages have also been sent to thousands of recipients in the region.

Emile Ulangi Usumbu volunteered to help raise awareness about the issue of stigma after integration difficulties his family had when his son left the treatment center in February. Little David, Ulangi’s son, had symptoms before he was declared negative at the transit center.

"I volunteered to accompany survivors of the Ebola virus disease because I know it is difficult for them. Myself, in my family, I had difficulties because my son had presented symptoms and that it was not easy for our reintegration," he said.

“To serve as an example and demonstrate that our loved ones who survived Ebola are not a health hazard, we approach survivors who sometimes feel alone,” said Nehema. “We speak with them, discuss, walk in public with them so that the other members of our community see that the survivors cannot transmit the virus to us.”

“We prefer the community approach because it uses interpersonal communication. Our community relays, who are very influential leaders in their communities, educate local populations that survivors of Ebola virus disease are not a danger to others,” Lushima said.

While the country survived the 2018-2020 Ebola epidemic, another epidemic was recently declared in in Mbandaka. A total of 41 cases have been recorded, with 17 associated deaths, according to the WHO. 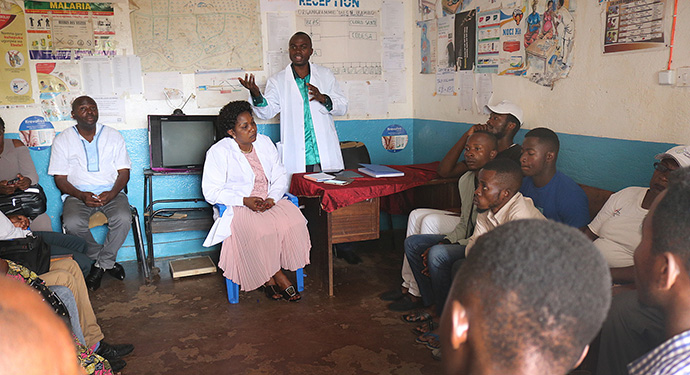 Unda believes that continuing to keep the population on the alert is one of the most effective means of protecting oneself.

“As we have just finished with this 10th epidemic in East Congo, I have the conviction that we will end with this 11th epidemic which has just appeared in Mbandaka,” he said.