• Despite the disturbing recent visuals from Afghanistan, one expert in Islamic-Christian relations said perceptions of Islam by Americans have improved over the past two decades.

• Through ecumenical partnerships on the ground, United Methodists continue to work to improve life for Afghans, as they have since the 1960s.

The chaotic U.S. withdrawal from Afghanistan coincided roughly with the 20th anniversary of the Sept. 11, 2001, terrorist attacks in New York, Virginia and Pennsylvania.

Despite the disturbing recent visuals from Afghanistan, one expert in Islamic-Christian relations said perceptions of Islam by Americans have improved over the past two decades. David Grafton, academic dean and professor of Islamic Studies and Christian-Muslim Relations at Hartford Seminary in Connecticut, thinks there is reason for hope.

While acknowledging continuing Islamophobia in America, Grafton said that “certainly, the average American is a little bit more informed about Islam than they had been 20 years ago.”

“There are many more Christians in America that have more positive views of Muslims than there were prior to 9/11,” he added.

United Methodists are still working, through ecumenical partners there, to improve conditions for people in Afghanistan.

“A number of local Taliban commanders have gone to humanitarian organizations, especially with health care, and said, ‘Please keep these centers open, keep seeing patients,’” said David Wildman, a staff executive with United Methodist Global Ministries who works on equal rights and racial justice issues. He stays in communication with grassroots partners in the Middle East and Afghanistan and has visited those areas often.

“I haven't heard reports from all the communities (in Afghanistan), but it seems … that things are slowly opening back up,” Wildman said. 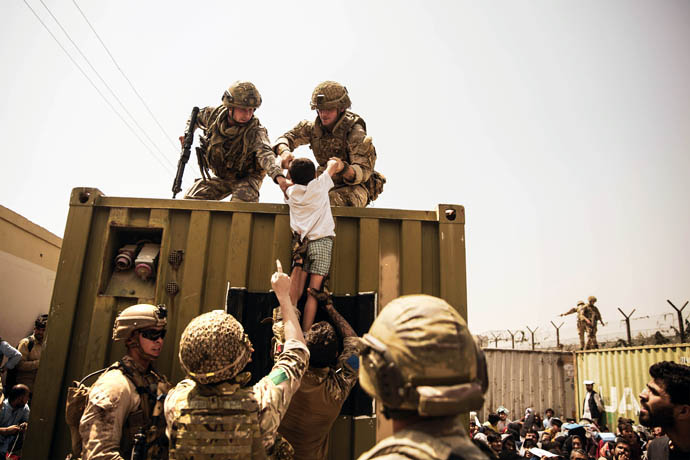 UK and Turkish coalition forces and U.S. Marines assist a child during an evacuation at Hamid Karzai International Airport in Kabul, Afghanistan, on Aug. 20. While the last U.S. forces have left the country, United Methodists are still working with ecumenical partners there to improve conditions for people in Afghanistan. Photo by U.S. Marine Corps Staff Sgt. Victor Mancilla, courtesy of the U.S. Department of Defense.

Political repression, threats to women’s rights, a faltering economy, hunger and drought are all challenges for the people of Afghanistan. News coverage of the frantic evacuations was riveting, but evacuees represent less than a third of 1% of people in the country, Wildman said.

“The concern Global Ministries and UMCOR (United Methodist Committee on Relief) is looking at on the ground is that 42% of Afghans are facing food insecurity,” Wildman said. “And 40% or more of the crops have failed for this season because there's not enough water.” 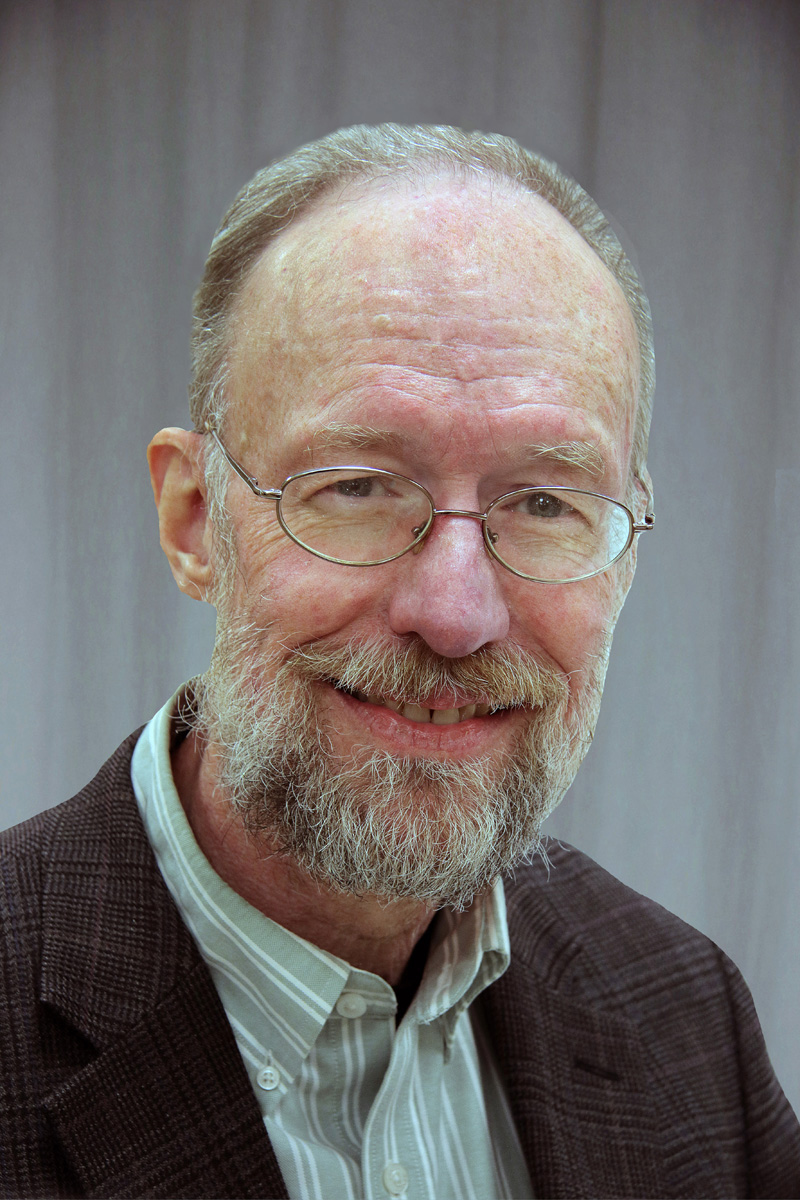 Aid workers have earned the trust of some Afghans by making clear that they are committed to the well-being of Afghan people and want to collaborate with Muslim communities to help. It’s also important that Muslims understand that there is no agenda to convert anyone to Christianity, Wildman said.

“That goes a long way,” said Wildman, who noted that previous agriculture and health care efforts, including a commitment to desperately needed optometry care, have earned United Methodists credibility with Afghans.

United Methodists were working to help the people of Afghanistan as far back as the mid-1960s, Wildman said, adding that the work has continued “through every conceivable regime.” The UMCOR field office in Afghanistan closed in 2014 and there hasn’t been United Methodist staff there since 2020, he said.

Projects such as latrines, high-altitude green houses and irrigation ditches, supported by the denomination, have made a big difference in Afghanistan.

“That's a powerful way of building relationships, by breaking bread together and working together,” Wildman said.

One myth about Islam — that it is monolithic and uniform — needs to be debunked, Grafton said.

“Muslim communities are as diverse as Christian communities when it comes to a wide variety of views of the Quran about views of women and roles of Sharia, for example,” he said. “That usually is not understood by the average non-Muslim.”

Islam in Afghanistan is different than Islam in Egypt, Morocco, Trinidad or Senegal, Grafton pointed out. But some Americans believe the Taliban represents all of Islam. 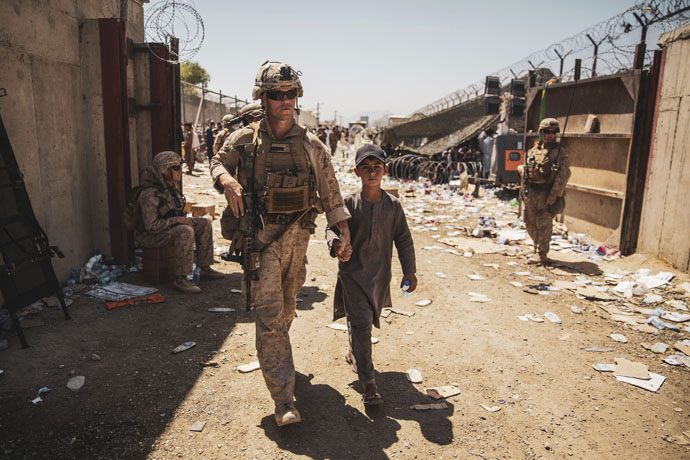 A U.S. Marine with the Special Purpose Marine Air-Ground Task Force-Crisis Response-Central Command escorts a youth to his family during an evacuation at Hamid Karzai International Airport in Kabul, Afghanistan, on Aug. 24. Photo by U.S. Marine Corps Staff Sgt. Victor Mancilla, courtesy of the U.S. Department of Defense.

“The vast majority of Muslims around the world were against the previous Taliban regime that was toppled in 2001,” Grafton said.

America is an example of a country with a Muslim population whose views and backgrounds range widely. Separate waves of immigrants are quite different, Grafton said.

Muslims of South Asian descent including immigrants from India, Pakistan and Bangladesh came in the 1960s and ’70s, many of them well-educated and prosperous.

“Then in the 1990s, you have a wave of Lebanese and Somalis who left their countries that were in the midst of civil war and were primarily blue collar,” Grafton said. “They have a very different perspective of the world. … So, it really depends on who you're speaking to in terms of how they view American Christians.”

Grafton urges more dialogue between Christians and Muslims in the U.S.

“There's nothing that works better than actually having Christian congregations get involved in hosting refugees or getting involved to meet members of a local Islamic center or a mosque,” Grafton said. “People quickly realize that you're not talking about some kind of … monolithic entity.

“You're talking about particular people who find comfort in the Islamic faith and that provides identity for them, which is different than simply listening to talking heads talk about what Islam supposedly teaches.”

Belmont United Methodist Church in Nashville, Tennessee, hosted the Islamic Center of Nashville during Friday prayers in the month of Ramadan while the center’s mosque was being renovated. 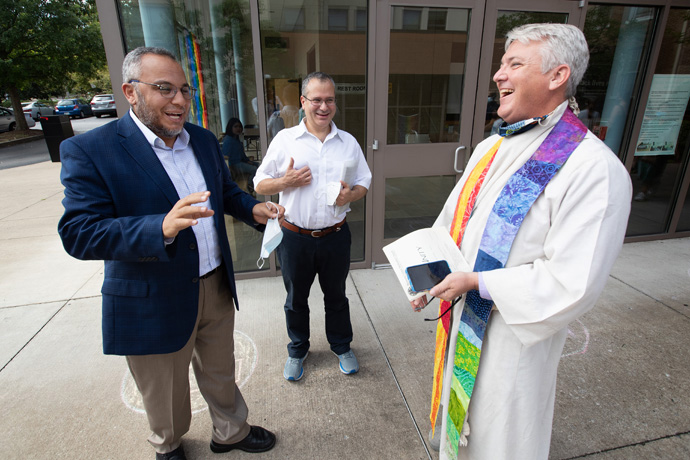 The Rev. Paul Purdue (right) welcomes Imam Ossama Bahloul (left) and board chairman Kamel Daouk from the Islamic Center of Nashville to Belmont United Methodist Church in Nashville, Tenn. The leaders of the nearby mosque came to Belmont on Aug. 29 to express their appreciation to the church for hosting their congregation during Friday prayers in the month of Ramadan. Photo by Mike DuBose, UM News.

Bahloul made a point to bring his children along for the visit.

"I want to give my children a chance to understand about Jesus and Christianity and the Christian community. It's only fair to Jesus for anyone to know that he did exhibit love to everyone," he said.

Wildman said the denomination’s relief work gives Afghans an alternative to the narrative pushed by extremists who see all Christians and the U.S. as the enemy.

“It's all too easy for militias and terrorist groups to say, ‘Well, the U.S. is a Christian nation. Look at what Christians do. They bomb civilians. They do this; they do that.’”

Afghans who’ve interacted with U.S. relief workers on agriculture, sanitation and health care projects might not be swayed to extremism so easily.

“Plenty of conversations happen over tea,” Wildman said. “It’s our hope that we'll be able to continue to do that, and that example will be like a light in the darkness to really shed hope and love.”

Patterson is a UM News reporter in Nashville, Tennessee. Contact him at 615-742-5470 or [email protected] UM News photojournalist Mike DuBose contributed to this report. To read more United Methodist news, subscribe to the free Daily or Weekly Digests.

United Methodists rose to the challenge of caring for survivors of the Sept. 11 terrorist attacks, but many of these helpers needed support afterward for their own trauma.
Immigration