Humanitarian assistance from The United Methodist Church has reached more than 5,500 war-displaced people in Eastern Congo.

The United Methodist Committee on Relief provided a $100,000 grant to support more than 700 families who fled to the territory of Lubutu, a United Methodist district of the Oriental and Equator Conference. The disaster management office in Eastern Congo distributed more than 200,000 pounds of food to 5,760 people.

Conflict between the Armed Forces of the Democratic Republic of Congo and militia in the localities of Lowa and Kuwait and surrounding villages forced more than 18,000 people to flee toward Lubutu in the Maniema province between February and June of 2019.

Tshomba said many fled after their villages were burned.

“They fled the war and abandoned everything. (Now) they live in Lubutu with host families,” he said.

Mamy Liata, a widow and mother of five children, was among those who received relief supplies. Her husband was killed in the war and she was shot in her left leg, which had to be amputated. She was forced to flee with her family and abandon everything.

“I say thank you very much for the food we just had. I was living in great difficulty with my children. … It is now difficult for me to look for food for myself and my children. We live thanks to the help of people who are volunteers,” Liata said.

“I’ve been in a lot of pain since my husband died. I live by the grace of God. Please do not stop at this level. Please help us next time. Please do not forget us in your prayers, too,” she said.

Samuel Mayele Papy, who leads an association formed by those who have been displaced in Lubutu, said the food from The United Methodist Church will help him to take care of his family while waiting for the harvest of a field he has cultivated.

“In the meantime, I will be able to eat without much difficulty, as has been the case since we arrived here in Lubutu. We say a big thank you to The United Methodist Church for thinking (of us) during this very difficult time,” he said. 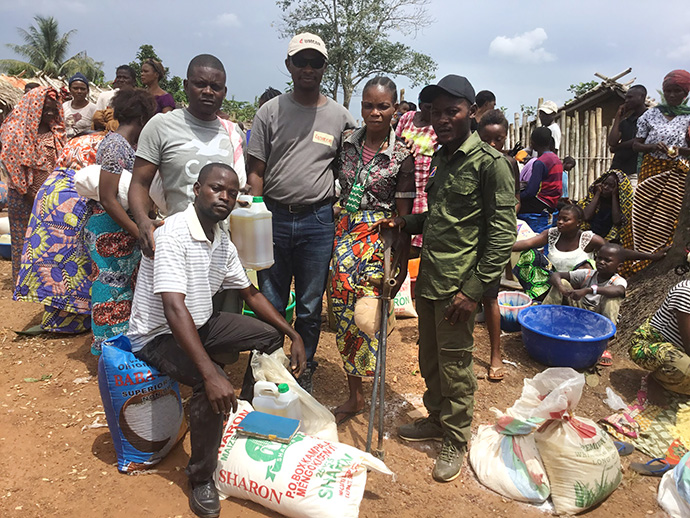 Mamy Liata, with crutch, and her family are among the war-displaced people in Eastern Congo who are receiving humanitarian assistance from The United Methodist Church. Photo courtesy of UMCOR Disaster Management Office, East Congo.

The Rev. Moke Mustafa Pene Shauri, Lubutu District superintendent, said helping those in need is the duty of United Methodists.

“The Bible gives us, in the book of Luke 3:11, the recommendation of our Lord Jesus Christ about giving and helping. John Wesley considered that attendance is one of the qualities required of a Christian disciple,” he said.

Helping the displaced in Congo also serves as a tool for evangelism, Pene Shauri said.

“1 John 3:17-18 recommends that if someone possesses the goods of the world and sees his brother in need and closes his bowels to him, how does God’s love dwell in him? Little children, do not love in word and with tongue, but in deeds and with truth,” he said.

“Their role is to report in real time any emergencies or natural disasters that may occur in their settings or environments, so that The United Methodist Church can see how to intervene,” Tshomba said.

The relief agency plans to provide Android phones to the volunteers so they can send information to the disaster management office, which then analyzes the data before intervening.

“These volunteers are already at work. ... For example, to enable us to assist the displaced people of Lubutu, the information was transferred to us by our team of volunteers in the district,” Tshomba said.

East Congo Bishop Gabriel Yemba Unda said he is grateful for the help.

“We have many problems facing our country. Without these volunteers, we will not be able to intervene and help our neighbors,” he said.

“We will never stop providing assistance to people in a disaster situation. These are the people who need us.”

Londe is a communicator for the East Congo Conference.

A group of leaders from the Methodist Church of Mexico and The United Methodist Church traveled to southern Mexico in April to meet with groups working with immigrants crossing into the country.
Social Concerns

A move from emergency aid to long-term support sums up the current phase of United Methodist efforts for Ukrainian refugees as faith communities continue to send supplies into Ukraine.
Mission and Ministry