The United Methodist Church in Côte d’Ivoire and the denomination’s relief agency are helping survivors who are reeling from recent flooding, a landslide and the COVID-19 pandemic.

Representatives of the Côte d’Ivoire Conference and the United Methodist Committee on Relief presented food and non-food aid to disaster victims in a July 5 ceremony in the Israel-Zossonkoi United Methodist Church’s courtyard in Anyama.

On Thursday, June 18, a landslide caused by heavy rains destroyed several houses, resulting in the deaths of at least 17 people in “Derrière-rails,” a poor hamlet in Anyama, a northern suburb of Abidjan.

Since then, Seydou Bakayoko, 45, has been struggling to recover. He lost five relatives in the tragedy. 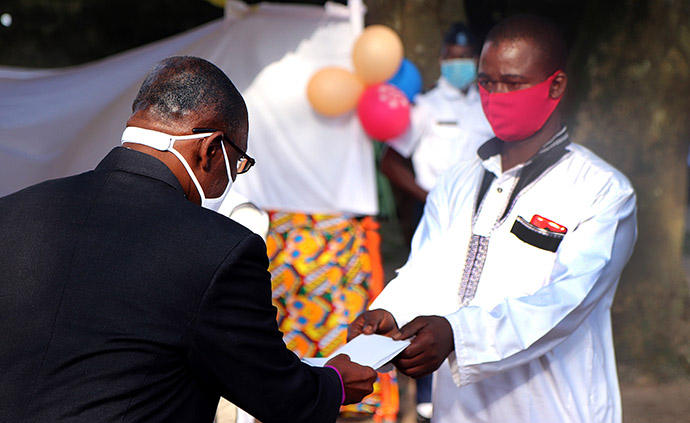 Bishop Benjamin Boni gives an envelope of cash money to Seydou Bakayoko, who lost five relatives in the floods in Abidjan. Each bereaved family received $100 for each person who died during a special ceremony held in Anyama, Côte d’Ivoire. Photo by Isaac Broune, UM News.

“All my dependents died. I have nightmares every night,” he said. The taxi driver lost his wife, daughter, niece, and nephew's wife and daughter.

They were buried July 3.

“I was walking quietly on the rails,” he said. “Suddenly I felt the earth shake. I saw the rails rise, the earth turning. I ran. It would have been a close call for me not to get out.”

“The landslide happened at two minutes to 9 in the morning,” he said. He remembers the time because he had just called his colleague to tell him that he would be arriving at work later because of the heavy rains. 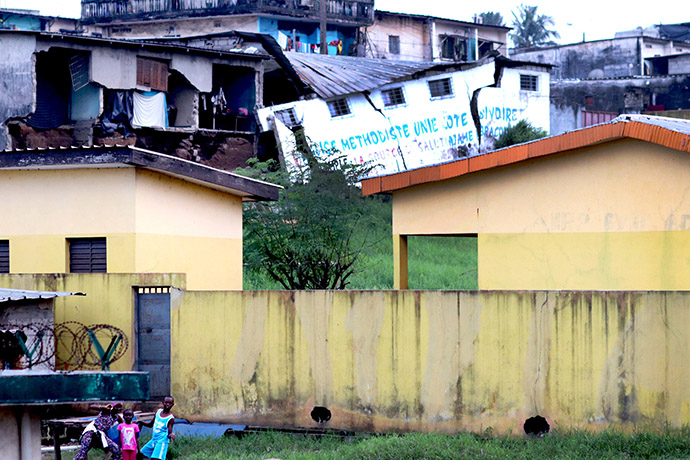 Flooding in the city of Abidjan caused considerable material damage to La Source du Salut Adjamé United Methodist Church. A section of the temple wall collapsed. The 300 members transformed the green space in the courtyard of this villa, which had been rented, to continue the worship services. Photo by Isaac Broune, UM News.

Belem was warned by his sister-in-law, who had noticed cracks in the walls of the house. He ran to warn his relatives.

“When I came back, I found that six courtyards had been swallowed up in the mud,” he said.

In the tragedy, he lost his uncle, his uncle’s wife – who was eight months pregnant – and their 2-and-a-half-year-old son, also named Ahmed Belem.

The 17 deaths occurred in seven families, which also lost all of their belongings in the mudslide. A total of 32 families were affected by the disaster.

The surviving families received support from the conference and UMCOR. The donations consisted of kits of 25-kg bags of rice, oil packs, mattresses, bedding and buckets. In addition to the package, each bereaved family received $100 for each person in the family who died. 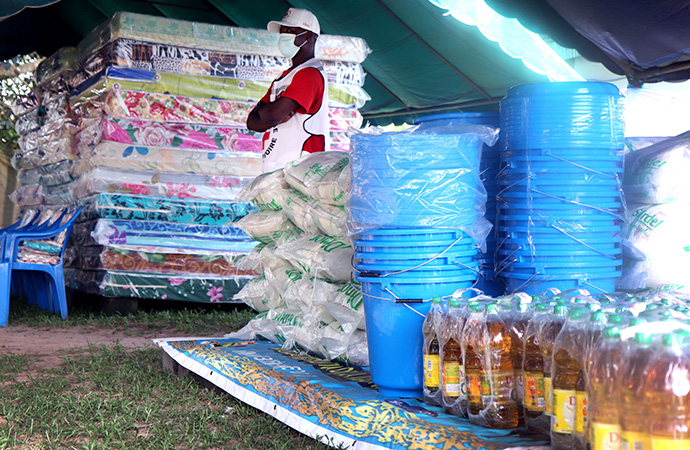 A Red Cross volunteer stands near the food and non-food items worth $30,000 funded by the United Methodist Committee on Relief to support the victims of the floods and the pandemic in the Greater Abidjan Region. The distribution ceremony took place July 5 in Anyama. Photo by Isaac Broune, UM News.

The aid was extended to 10 families in the Riviera district north of Abidjan who were also victims of the heavy rains in June.

In addition to the flood survivors, 300 widows whose livelihoods were impacted by the Greater Abidjan Area lockdown were rescued.

The Greater Abidjan Area includes Abidjan and surrounding towns of the capital city within a radius of 100 kilometers. The government has isolated it from the rest of the country to curb the spread of the coronavirus. Côte d'Ivoire has recorded 10,966 confirmed cases, including 75 deaths from COVID-19, as of July 6.

“More than 1,500 people from all faiths, selected from among the most vulnerable in the Greater Abidjan Area, will be impacted by these grants,” he said.

Côte d’Ivoire Area Bishop Benjamin Boni pointed out the longstanding social action of the church based on the love of a God who is concerned about the holistic wellbeing of every person.

“The church must not be satisfied with articulated words only, but also with words as action, as a gesture in favor of those who suffer,” he said.

Boni calls the faithful for a time of prayer and fasting every Friday to commit the victims of the COVID-19 and the upcoming October presidential elections in the hands of God.

“God is with you,” he said. “Don’t let the situation get you down.”