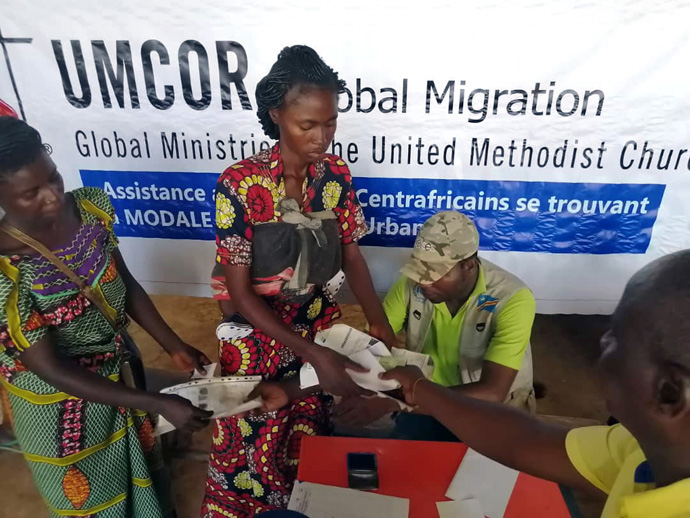 The United Methodist Church has helped nearly 1,000 families from the Central African Republic living in a refugee camp in Limasa.

Limasa is about 70 kilometers downstream from Yakoma on the Ubangi River in the Equateur Province.

“These displaced people are living in a camp set up by the United Nations High Commissioner for Refugees and are going through much more difficult situations,” said Jean Tshomba, coordinator of the United Methodist Committee on Relief’s disaster management office in eastern Congo.

The Congolese territory of Yakoma, which is in the province of North Ubangi, is considered a reception area for refugees and displaced persons from neighboring countries due to its geographical location and security situation.

Some 16,000 Central Africans have been living in North Ubangi in northwestern Congo since late 2020. They fled the violence between the Seleka and anti-balaka militias and were welcomed in Yakoma. Most of them are in sites set up by the United Nations High Commissioner for Refugees, but others are staying with host families who have come to their aid.

The Central African Republic is a mission conference within the East Congo Episcopal Area. 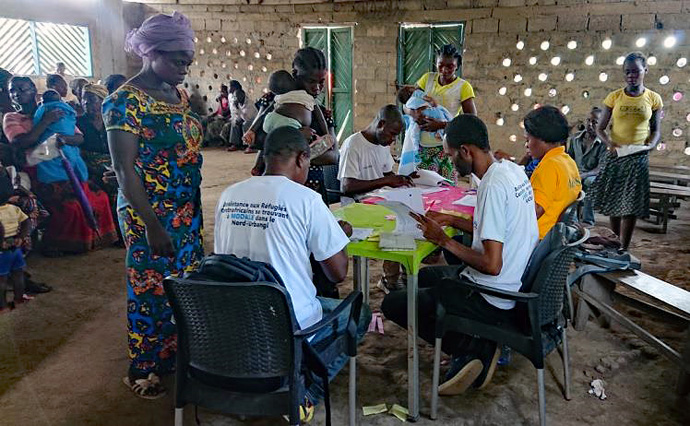 Through UMCOR’s Global Migration program, the humanitarian and development relief arm of The United Methodist Church has disbursed $50,000 to purchase food to assist the displaced.

The church’s disaster management office distributed cash “to avoid creating a shortage of products on the local market because of the importance of the tonnage sought and also to avoid the price hike on the market of Yakoma,” said Tshomba. “Among the beneficiaries, we have fathers, mothers, widows, orphans, daughters and mothers who live in difficult conditions.”

Bangakpela Ngbokoli Séverin who has been living at the Limasa camp for a few months, said he appreciates receiving aid from The United Methodist Church.

Donations can be made to UMCOR’s Global Migration Advance #3022144 to support work addressing the worldwide refugee and migration crisis.

“The cash will allow me to access not only food but also other services,” Bangakpela said.

Ngbangayema Hervé, another Central African living at the Limasa camp, said he and his family fled the insecurity without anything.

“When we left the Central African Republic, we left everything behind,” he said. “Our priority was to save our lives first. The assistance of The United Methodist Church comes at a time when we really need it.”

The United Nations High Commissioner for Refugees office in Congo facilitated the transport of Tshomba to the Limasa camp. In a letter addressed to United Methodist Bishop Gabriel Yemba Unda, Simplice Kpandji, head of the UNHCR field office in Yakoma, praised the church's efforts to assist the displaced.

“On behalf of the humanitarian community in Yakoma, I would like to thank you for this timely assistance to the needy refugees in Limasa. May God bless you for this saving act in this period of great crisis.”

Yakonzu Odette Charlot said the church's help will enable her to feed her family for a month.

“Since I've been in this camp, I've been growing a vegetable garden that allows me to sell the vegetables and earn some money,” she said. “The money I earn is not enough to feed my family. The money received will allow me to make a large provision and to last for several weeks or even more than a month.”

Yagremenga Sylvie, another displaced Central African woman who has benefited from the church's assistance, said she plans to put the money to good use: “I'm going into business to continue to support my family.”

On World Humanitarian Day, celebrated on Aug. 19 each year, Modeste Mutinga Mutuishayi, Minister of Social Affairs, Humanitarian Actions and National Solidarity, praised the dedication of those who work to save lives and preserve the dignity of people in the country.

“Humanitarian actors, sometimes risking their lives, do immeasurable work to bring emergency aid to millions of men, women and children repeatedly affected by the consequences of conflict and armed violence, epidemics and natural disasters in the country. It is also an opportunity to salute the Congolese families who spontaneously show their humanity by offering their homes to people in distress, constituting the first line of humanitarian response in the country,” said Mutuishayi.

Bishop Unda said that it is the duty of Christians to assist those in need.

California is continuing to deal with storms causing devastating floods, and it’s still too soon to assess the scope of the damage. But United Methodists are already doing what they can to help.
Church Leadership