In one hour, four young United Methodist leaders addressed why now is the time for the church to engage in dismantling racism and how each local church can — and must — make a change in the communities where it is serving.

Calling out the names of Black lives lost, the Rev. Theon Johnson III said inaction goes against the commandment to “love God, love neighbor and love oneself.” 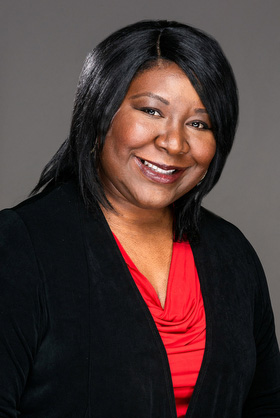 Johnson is pastor of Downs Memorial United Methodist Church in Oakland, California. Calling his community the “hub” for innovation, Johnson said repentance is an act of innovation.

“We have a responsibility to pick up the pieces to who we once were — we ought to get into some good trouble. Ruffle a few feathers. Make our mark in the world for the sake of God through Jesus.”

De Arco, who is national assistant director to the United Methodist Hispanic Youth Leadership Academy, said this time in history is not that different, noting that “this country … was founded on racist ideas.”

“Now we have George Floyd … now we have no choice but to confront racism,” he said. Floyd, an African American, died May 25 at the hands of Minneapolis police officers after being pinned to the ground and unable to breathe. 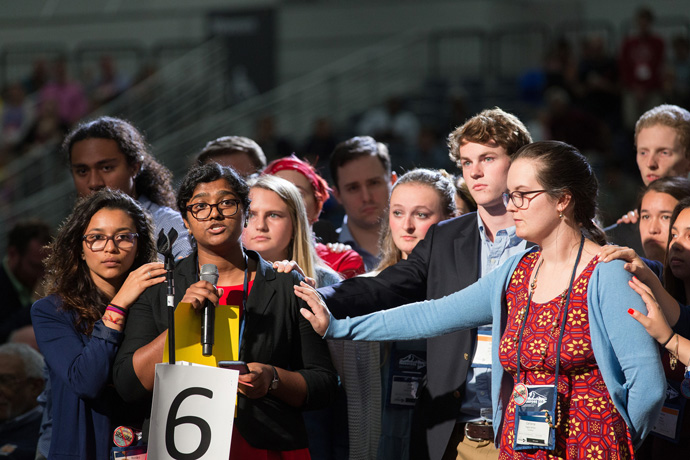 Ann Jacob is surrounded by other young people as she reads a statement on church unity during the 2016 United Methodist General Conference in Portland, Ore. File photo by Mike DuBose, UM News.

Hansen, a United Methodist deaconess, said “this is an interesting moment, but we need to give credit to young people who have done the work for years.” She said before Floyd there was Michael Brown and Freddie Gray, and people took to the streets when they were killed also.

Visit UMC.org/EndRacism for archives of this and other videos and resources.

Additional Town Halls will take place through the end of the year, and the topics will include:

Ann Jacob, who serves at Edmonds United Methodist Church in Washington, a predominantly white congregation, said, “It is heavy work if you are the only person of color actively doing antiracism work.”

It is a long journey, she added, and anyone who doesn’t believe that will be disappointed.

The young leaders said the denomination needs to make deep, structural changes that invite new leadership at every level.

“In my experience of working in the church, lots of times the push for new leadership only goes as far as the current leadership feels comfortable,” said De Arco.

“It takes trust to say, ‘If I let go, God will continue,’” Johnson said. “How can we expect stagnant structures to create dynamic people? It like saying, here go draw a square circle.”

Hansen pointed out that “heart is the domain of the church.”

“We have the language, we understand generational sin, corporate sin, that justice goes alongside reconciliation,” she said.

“Being stuck in guilt separates us from God and others,” Hansen said. “We are a mainline denomination, we have the doctors, the lawyers, the politicians in our pews. How are we using our context to move the needle?”

Gilbert is a UM News reporter in Nashville, Tennessee. Contact her at 615-742-5470 or [email protected]. To read more United Methodist news, subscribe to the free Daily or Weekly Digests.

The U.S.-Mexico border wall speaks volumes about attitudes toward Latinos, and the church must do more to respond.
Social Concerns

United Methodists say there is potential for positive things to emerge from the racial unrest after two shootings in Wisconsin.