As COVID-19 numbers continue to rise, with more than 25,000 cases and 700 deaths in Congo, the country wrestles with a resurgence of Ebola.

In November 2020, the Congolese government declared the end of an Ebola epidemic, which since April had infected 130 people and claimed 55 lives. On Feb. 7, however, three new cases were detected in Bénia near Butembo in North Kivu, according to Dr. Eteni Longondo, minister of health. That number has risen to six confirmed cases, and at least two people have died, according to the Ministry of Health.

Response teams are isolating people who had contact with individuals infected during the most recent outbreak.

“We have already sent lay leaders and clergy to sensitize the population, especially the United Methodists living in this region,” said the Rev. Dumas Balaganire, Beni District superintendent.

Dr. Claude Watukalusu, supervisor of health in the Kivu Conference, said the church also has been helping the Congolese government raise awareness in the fight against COVID-19, while collaborating with other health partners.

With the help of the United Front Against Riverblindness, he said, the church has led awareness campaigns via community radio in 10 health zones in North and South Kivu. Lay leaders and clergy advised on prevention of COVID-19 and sent text messages via the UMConnect system, an initiative of United Methodist Communications. 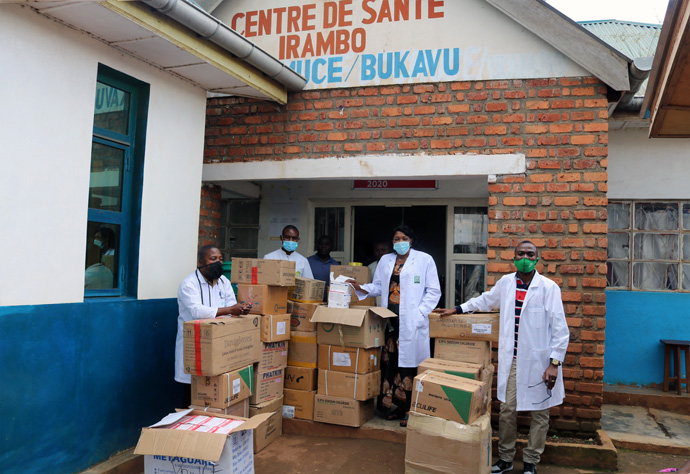 Dr. Marie Claire Unda (center, under door) oversees the distribution of medication to support people living with HIV at United Methodist Irambo Hospital in Bukavu, Congo. Unda, who coordinates the Maternal and Child Health Program in East Congo, said that the COVID-19 pandemic could significantly affect the number of people living with HIV. Photo By Philippe Kituka Lolonga, UM News.

They reached more than 4 million people daily for three months through the radio and texting programs, Watukalusu said.

“I am proud to partner with The United Methodist Church in the fight against COVID-19,” said Dr. Daniel Shungu, UFAR executive secretary. He pledged to continue working with the church to fight COVID-19 in East Congo.

Dr. Djimy Kasongo, medical director at United Methodist Irambo Hospital, said his facility has collaborated with Action for the Promotion of Maternal and Child Health, a nongovernmental organization.

“We have obtained an isolation and triage room at the Irambo health center,” he said, “which allows us to sort and isolate the sick during this period of COVID-19.”

Dr. Damas Lushima, general coordinator of health in the East Congo Conference, said the church would continue fighting COVID-19 and Ebola, as well as HIV, malaria and other diseases.

On World AIDS Day, Dec. 1, Winnie Byanyima, executive director of the Joint United Nations Program on HIV/AIDS in the Congo, said pediatric care should be a priority. She noted that of the more than 520,000 people living with HIV in Congo, over 64% are women. Of the 68,000 children under 14 who are HIV positive, only 25% are receiving treatment.

Dr. Marie Claire Unda, who coordinates the Maternal and Child Health Program in East Congo, noted that because of the impact of COVID-19, this number could double. With the closure of borders to confine the spread of the coronavirus, production and distribution of drugs have been affected, reducing the supply of antiretroviral treatment, she said.

The Kivu Conference recently provided transportation to 20 women living with HIV in the Irambo health center in Bukavu, enabling them to receive medication at Panzi, almost 10 miles away.

The United Methodist Board of Global Ministries also continues to assist women living with HIV in East Congo, including helping them to access treatment centers and become self-sufficient through training and support. Funding from the agency’s Global Health unit also increased the number of HIV diagnostic tests available in the region. 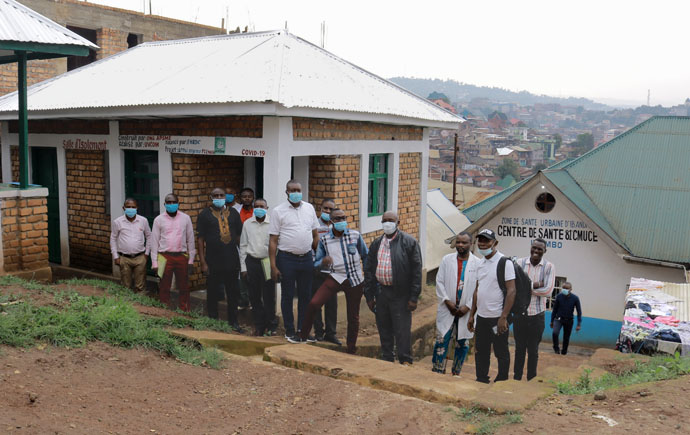 Doctors and nurses stand in front of the isolation and triage room built by Action for the Promotion of Maternal and Child Health, a nongovernmental organization, at United Methodist Irambo Hospital. The staff received training on the hospital's upgraded malaria treatment protocol. Photo By Philippe Kituka Lolonga, UM News.

Furaha Fundiko, a mother of five, lives with HIV. She expressed gratitude to The United Methodist Church, reminding others not to despair but to follow doctors’ instructions for living with the disease.

A public health report stated that in Congo, more than 18 million cases of malaria, including more than 18,000 deaths, are registered each year. Malaria remains the leading cause of morbidity, hospitalization and mortality in the country.

Dr. Frederick Yemba, coordinator of the Imagine No Malaria program in Congo, said that while the church has made significant strides in distributing mosquito nets and medicine to health structures, much remains to be done.

In January, Yemba organized a training event for nurses and doctors of three conferences. The goal is to build capacity for malaria treatment protocol and reporting by mobile phones. Participating conferences included East Congo, Kivu, and Oriental and Equator.

Encouraging people to remain calm, East Congo Bishop Gabriel Yemba Unda urged “all the people of God” to respect sanitary hygiene measures and barrier guidelines and to make their loved ones aware of Ebola, COVID-19 and other diseases.

United Methodists continue to scramble to provide aid to war-displaced people in Ukraine and surrounding countries. One recent challenge: Finding new housing for displaced people in western Ukraine who had been using a school as shelter.
General Agencies

The board of The United Methodist Church’s finance agency has approved a monthly stipend for active bishops who serve more than one episcopal area in this time of disruption.
Disaster Relief

Despite challenges like the gasoline shortage and having to pay customs clearance and taxes on goods, churches in Poland, Romania, Slovakia, Hungary and the Czech Republic continue to help refugees and send supplies into Ukraine.