Former U.S. President Jimmy Carter, who helped avert a crisis between North Korea and the United States in 1994, has been working for peace for the entire Korean Peninsula ever since.

In his opening address at the 2018 Roundtable for Peace on the Korean Peninsula — a Nov. 9-11 event hosted by the United Methodist Board of Global Ministries — Carter commended representatives of various Methodist denominations and ecumenical organizations for their own peace efforts.

“I can’t think of a more worthy comprehensive effort for the Methodist churches of the world and for the World Council of Churches together and others … than to work for peace in the Korean Peninsula and also particularly for peace between North Korea and the United States.” 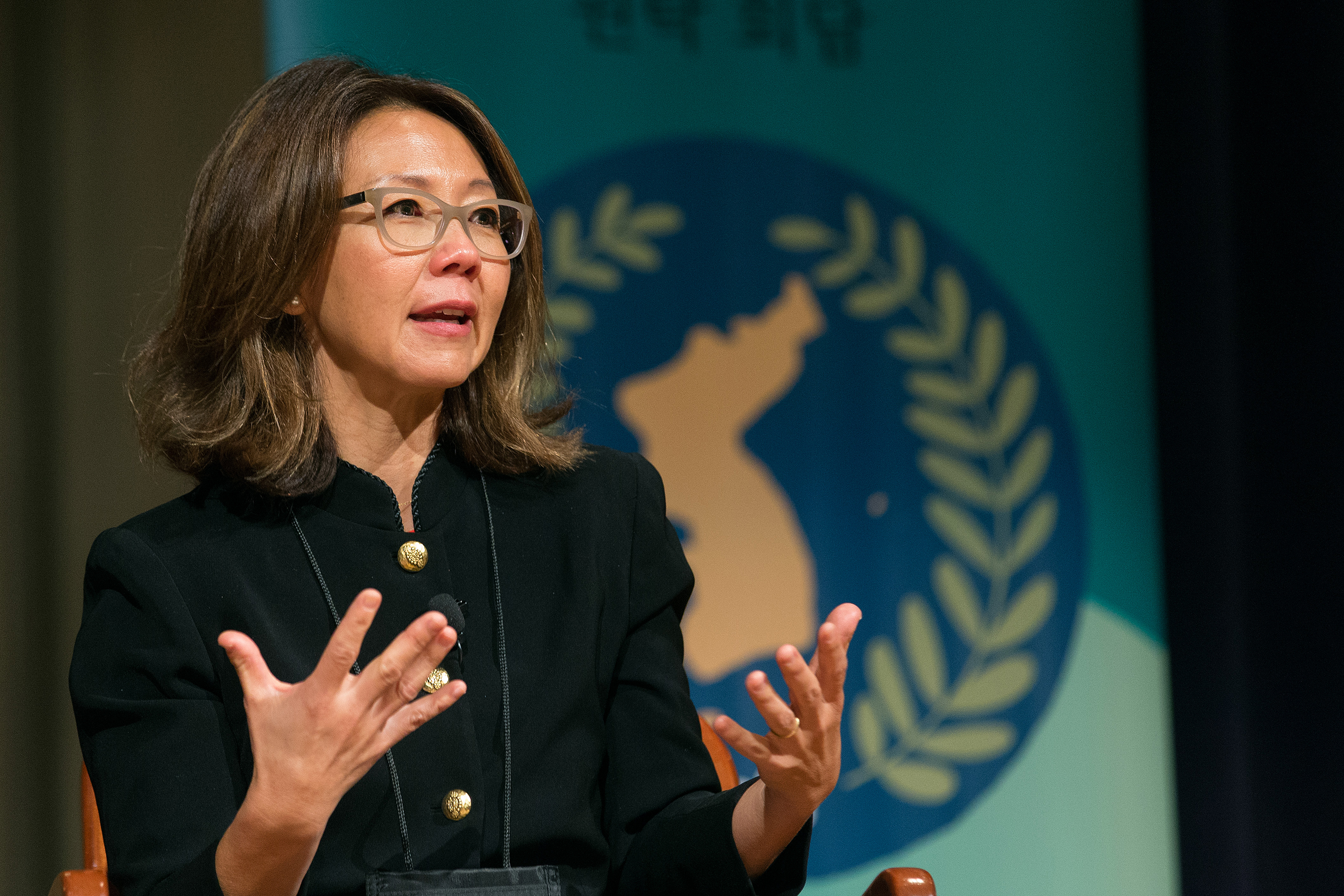 Christine Ahn speaks during the Roundtable for Peace on the Korean Peninsula in Atlanta. Ahn is founder of Women Cross DMZ, a global movement of women mobilizing to end the Korean War. Photo by Mike DuBose, UMNS.

During the roundtable’s morning session Nov. 9 at the Carter Center, the 39th U.S. president joined his longtime friend, the Rev. James Laney, in offering both a historic and current perspective of the situation. Laney is a retired United Methodist minister and former president of United Methodist-related Emory University.

North Korea has always demanded the U.S. deal directly with its leaders to forge a final and binding peace agreement treaty, Carter told participants. “When I was in the White House for four years I tried to accomplish this, unsuccessfully.”

But Carter was successful in 1994 when he was dispatched on behalf of the Clinton administration to meet with then-President Kim Il Sung and avert a nuclear crisis. Laney, a former missionary in South Korea, was the U.S. ambassador in Seoul at the time.

Laney detailed some of the reasons there has been no resolution with North Korea in the years since then. He presented that perspective, he said, “not on behalf of the North but to help us to realize that peacemaking means stop demonizing, stop being so skeptical and distrustful.”

While there is reason to be distrustful, he said, “the fact is that peacemaking is not a witness to the good of peace. Peacemaking is the actual activity of making peace happen.”

That means setting aside “the human impulse to be bitter” and the desire for punishment. Laney said Christians must rise above natural feelings of animosity and hostility because of wounds inflicted. He said they don’t need to forget those feelings but should “bracket them,” or set them aside in the interest of peace and reconciliation. 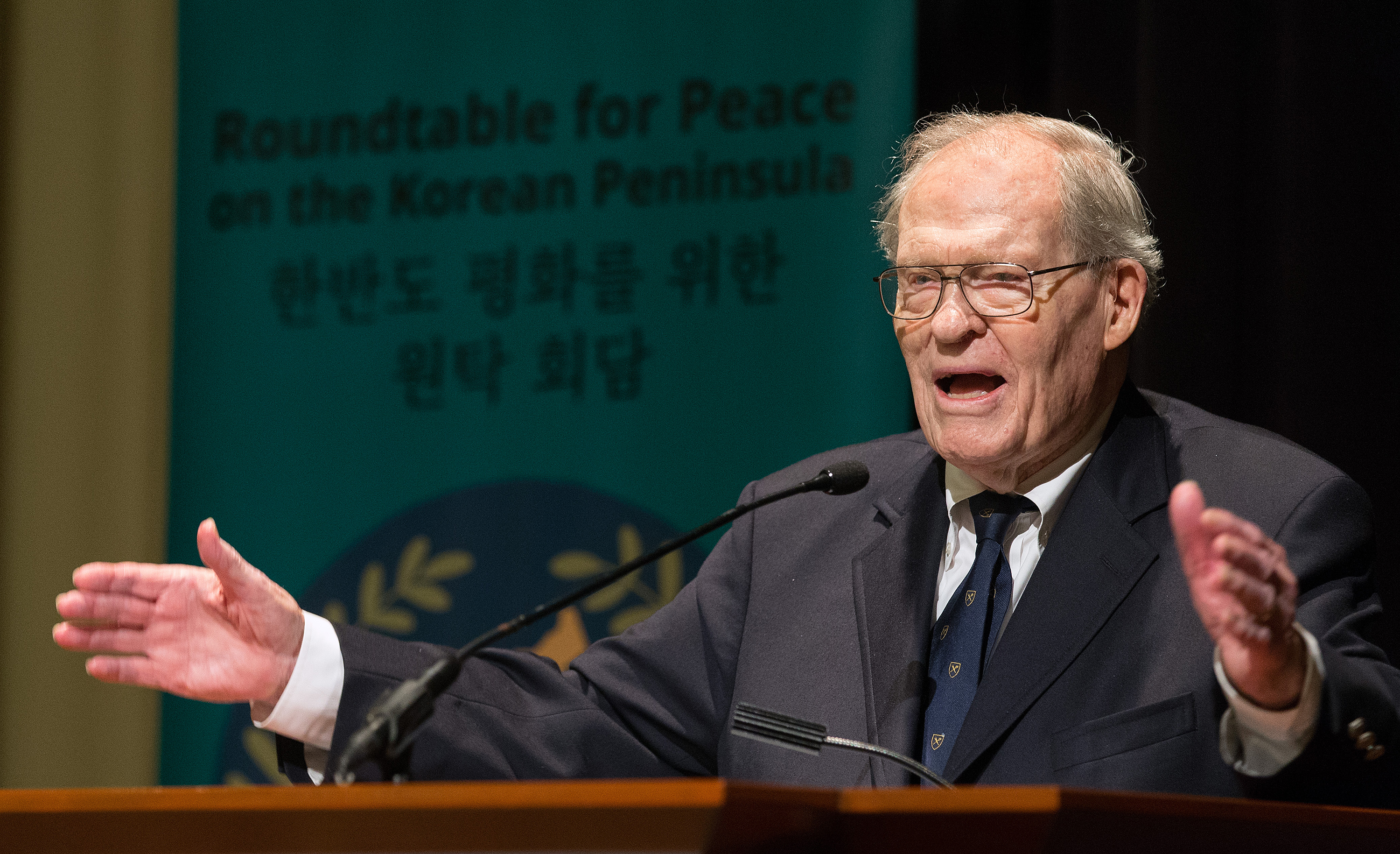 The Rev. James T. Laney speaks during the Roundtable for Peace on the Korean Peninsula in Atlanta. Laney is former U.S. Ambassador to South Korea and former dean of the Candler School of Theology. Photo by Mike DuBose, UMNS.

While still concerned about human rights violations in North Korea, Carter said he was pleased with the progress made between Moon Jae-in, the president of South Korea and Chairman Kim Jong Un of North Korea, who have met three times in the past year.

“I am very prayerful that the recent effort by President Trump to find common ground with the North Koreans will be successful,” Carter said.

Continuing steps, said Carter, include proceeding with peace talks, forming a conference or coalition of the two Koreas, the U.S. and China; having the U.S. sign a complete peace treaty officially ending the Korean War and monitoring each other’s compliance with the proposed agreement outlined earlier between Trump and Kim.

North Korea wants to become part of the community of nations, he pointed out. If the U.S. can undertake this step-by-step process, which it has not been willing to do in the past, Carter said it could mean an end to the war. And he said that could “lead to a complete denuclearization in North Korea and hopefully the entire Korean Peninsula.”

In a congratulatory letter to Carter and church leaders and members, the South Korean president saluted the work of the roundtable and noted the strong United Methodist connection to his country and the Korean Peninsula.

“Right now on the Korean Peninsula, a historic window of opportunity is being opened,” Moon wrote. “Longstanding prayers and efforts by Koreans and people around the world who long for peace are coming to fruition.” 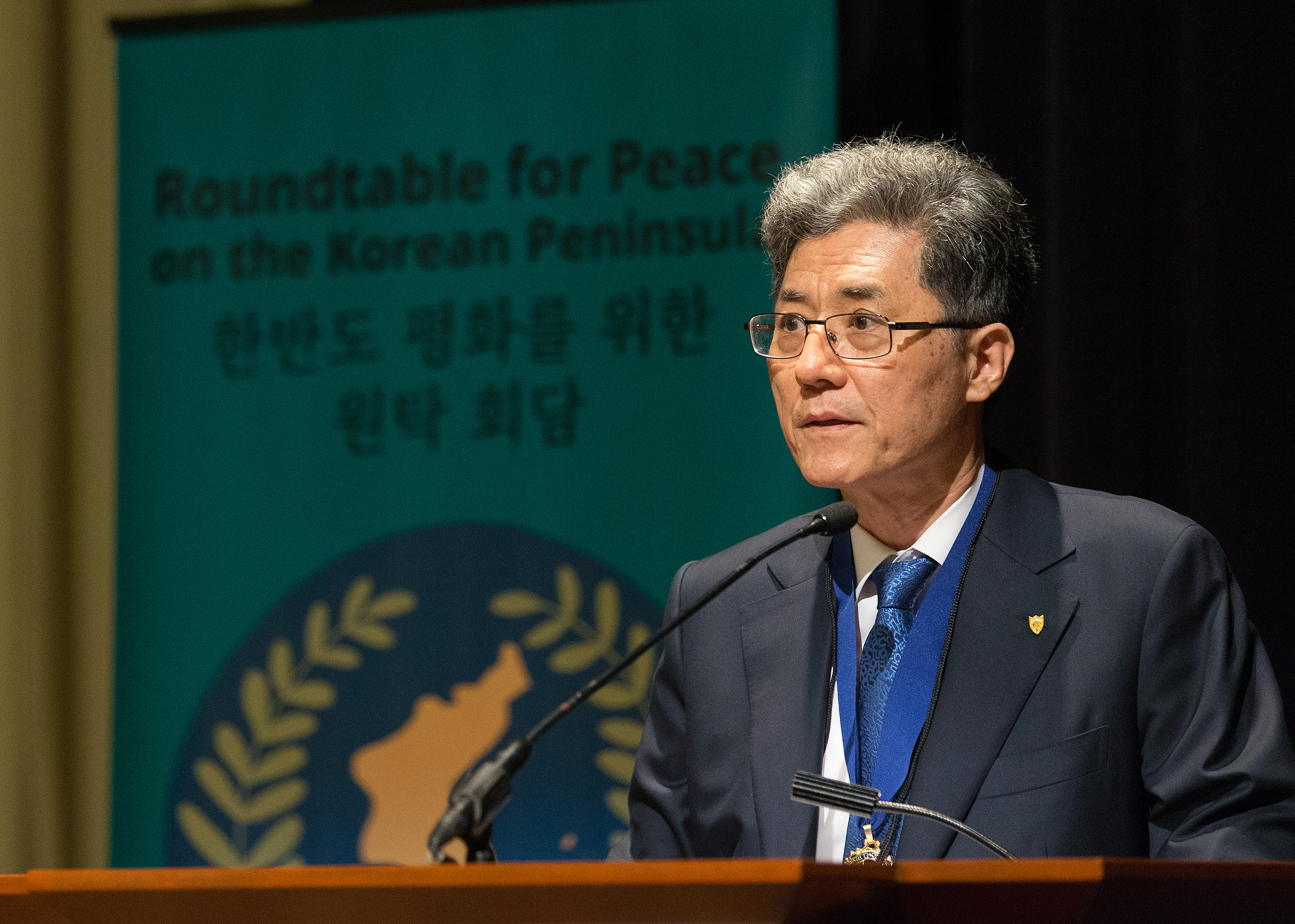 The Rev. Jong Chun Park brings greetings from the World Methodist Council to the Roundtable for Peace on the Korean Peninsula meeting in Atlanta. Photo by Mike DuBose, UMNS.

The Rev. Jong Chun Park, president of the World Methodist Council, told United Methodist News Service he appreciated how Carter and Laney shared their experiences in 1994. “And their actions were based on their faith,” he noted. “That’s why their presentation were even more powerful. I appreciate their Christian approach toward peace on the Korean Peninsula.”

A panel of speakers also reflected on the presentations by Carter and Laney and offered perspectives based on their own experiences and Christian viewpoints.

Christine Ahn, founder and international coordinator of Women Cross DMZ, talked about how political rhetoric stymies progress toward peace. “But a peace agreement could defuse tensions while serving as a security guarantee, as Laney and Carter both noted this morning,” she said.

“It is our ethical and moral responsibility to bring a closure to this war,” she told the gathering.

Hong Jung Lee, top executive of the National Council of Churches in Korea, was present when Moon and Kim signed an agreement after meeting for a third time in September.

Lee said he was concerned that the U.S. is stifling the progress the two Koreas might have made. The biggest obstacle to peace, he noted, is the longstanding economic sanctions against North Korea.

Jongdae Kim, co-founder and executive director of the Re’Generation Movement, is the grandson of former South Korean President Dae-jung Kim. He said his grandfather campaigned on the promise of peace and promoted peaceful co-existence during his presidency.

He believes that universal value of peaceful co-existence “is still valid today.” He uses his organization to practice “inclusion in our daily lives at the micro level” to contribute to peace at the macro level. 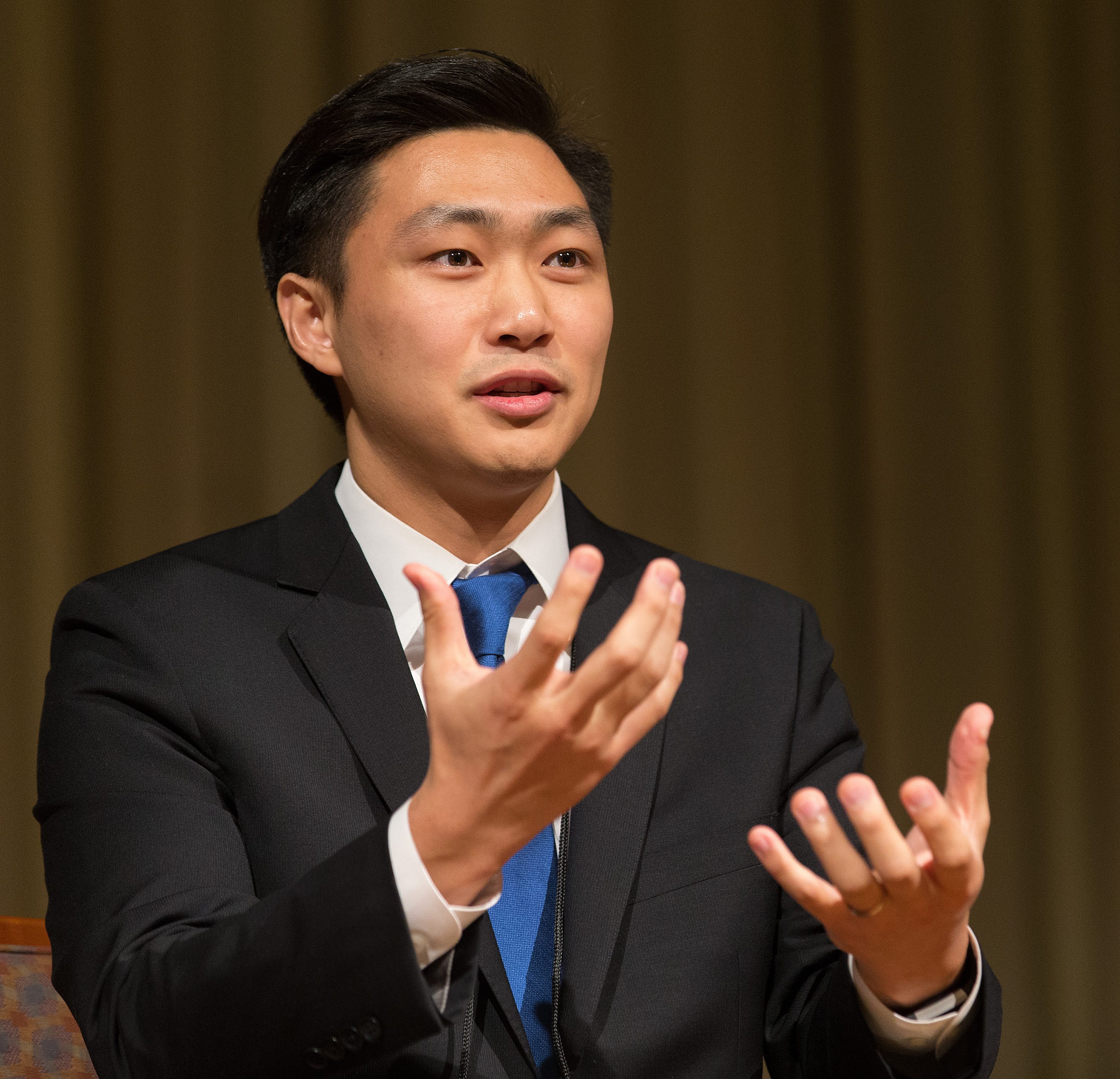 Jongdae Kim takes part in a panel discussion during the Roundtable for Peace on the Korean Peninsula in Atlanta. Kim is executive director of the Re'Generation Movement, which offers free college testing preparation classes and college counseling and hosts conversations on social integration. Photo by Mike DuBose, UMNS.

The World Council of Churches has a history of working for peace on the Korean Peninsula and with Christians in North Korea, dating back to 1984, said Peter Prove, its director of international affairs.

Prove told a story of his most recent visit to North Korea, in May. After some effort at explanation, he said the delegation was able to present a gift to a government official of an Orthodox icon showing Christ as the prince of peace. He called that acceptance a little expression “of the miracle that is taking place.”

For the roundtable participants, the entire morning’s discussions were informative and encouraging.

The Rev. Kipyung Nam, top executive, Ecumenical Youth Council in Korea, came to represent young Christians of Korea and to see how to collaborate on this ministry of peace and justice.

He noted the change in attitude about North Korea. “The country was an object of correction and teaching … considered as a terrorist country, not a normal one,” he said. “But now people see the country as a partner for a peace process as a member of the global community. I am so excited to see the outcome of this Roundtable for Peace on the Korean Peninsula.”

The Rev. Susan Nam, who came to Atlanta from Seoul as a clergy delegate of the Korean Methodist Church, remembers recent threats to peace on the Korean Peninsula.

“However, thankfully, by the grace of God, I strongly believe that now peace on the Korean Peninsula is near, and we are in peace mode. I hope this gathering provides us a theological and political basis for the peace movement in Korea.”