Before dealing with a divided church, the Commission on a Way Forward first needed a way to deal with each other.

The diverse group of 32 United Methodists — charged with helping the Council of Bishops find ways across the denominational divide over homosexuality — came from nine countries and various walks of life. They had their own conflicting ideas of how the church should minister with LGBTQ individuals.

With that in mind, the commission’s three bishop moderators encouraged members to read “The Anatomy of Peace: Resolving the Heart of Conflict” before they began meeting in January 2017. Later that year, the United Methodist Council of Bishops also discussed the book during its fall meeting.

After nine meetings, the commission has concluded. A majority of bishops have made a recommendation for a Way Forward, based on the commission’s work.

Now, the conversation moves to the delegates who will have final say at the 2019 special General Conference. Many delegates are including the book in their conversation.

So what does a book produced by the secular Arbinger Institute have to offer what is essentially a religious debate? 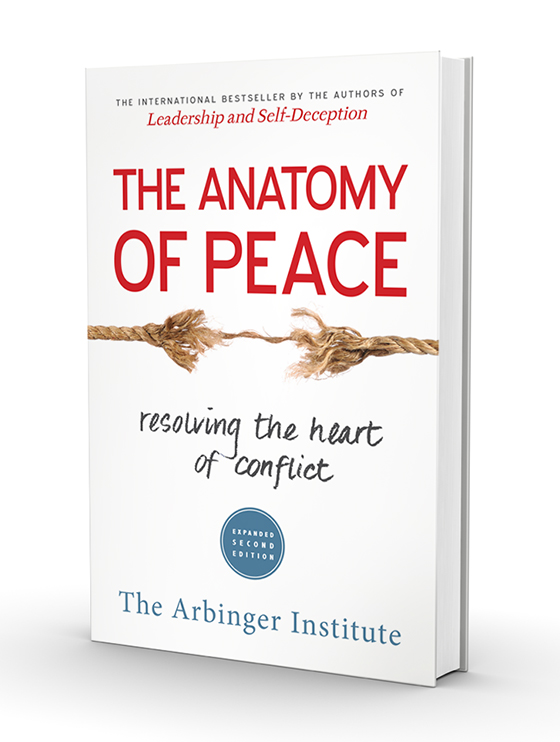 “It’s a book that is just chock full of a lot of the very principles that Scripture teaches about the value of people,” said the Rev. Jorge Acevedo, lead pastor of Grace Church, a multi-campus United Methodist congregation in southwest Florida.

He first encountered the book through Spiritual Leadership Inc., which offers coaching to church leaders.

“We’ve not treated one another well in our disagreement around human sexuality,” Acevedo said. “It’s almost like a family fight. After fighting for four-and-a-half decades, we put each other in a box. People become an issue instead of people remaining people made in the image of God and of supreme worth and value to God.”

The book, he and other commission members said, can help United Methodists remember what it takes to love their neighbor even in contentious times.

The book portrays a discussion that takes place among parents and instructors at an Arizona survival camp for young people trying to overcome drug addictions. In the book, a Palestinian Muslim and Israeli Jew jointly run the camp. While the setting is fictional, the conflicts the parents face in their lives and in dealing with each other are real.

The story expands on two basic ideas: 1) People should spend more time on helping things go well than trying to fix what’s gone wrong. 2) To help things go well, individuals must develop hearts at peace rather than at war. That means seeing people as people, not as objects or obstacles.

Steiner Ball said the book had a “profound influence” on the commission.

“This highly diverse group of individuals was able to focus not on convincing someone to change their position on human sexuality,” she said, “but rather to focus on building community where we were able to discover and experience a different way of being with each other.”

Carter, who is now the Council of Bishops president, said a heart at peace is not about just being nice to another person.

“It is the refusal to exaggerate our differences, and the refusal to go to war with another person,” he said. “A heart of peace seeks to break the cycle that escalates our conflicts through working at the relational level and sees the other as a person created in the image of God.”

Praying our Way Forward begins a new phase on June 3. Image courtesy of Council of Bishops.

The Council of Bishops, in partnership with The Upper Room, is launching the third phase of Praying our Way Forward, which will continue from June 3 to the Special General Conference in February 2019.

In Phase 3, all United Methodists are invited to:

Dave Nuckols, Minnesota Conference co-lay leader and treasurer of the Connectional Table, stressed that the commission used additional resources — not least of all, the Bible. Early on, he said, the group particularly focused on Galatians, Paul’s epistle to a group of early Christians facing their own conflicts.

The commission also used the TED talk Danger of a Single Story by Nigerian author Chimamanda Ngosi Adicie. In the video, Adicie tackles misconceptions about African nations and the dangers of stereotyping more generally. Nuckols found the warning against stereotypes particularly helpful, and is urging the Minnesota delegation to use the TED talk as well as the book.

“It’s easy for some Western progressives to resent the current General Conference deadlock without taking time to understand the social realities of the non-Western world,” he said.

“Likewise, it’s been too easy for some conservatives to stereotype others as ‘covenant breakers’ without taking time to understand the deep faithful reasons that cause those persons to risk so much to be in full ministry to LGBTQ persons.”

The Rev. Tom Berlin, lead pastor of Floris United Methodist Church in Herndon, Virginia, said his fellow Virginia delegates used “The Anatomy of Peace” at their first meeting preparing for the special General Conference. He said the book gives the delegation “a common vocabulary and a baseline of expectations of how we wanted to be with each other.”

The denomination’s Book of Discipline currently says that while all people are of sacred worth, the practice of homosexuality is “incompatible with Christian teaching.” The book lists officiating at same-gender unions and being a “self-avowed practicing” gay clergy member as violations of church law.

The bishops are recommending what they call the One Church Plan that would leave questions of ordination and marriage closer to local church level, but not compel anyone to violate their conscience.

A number of commission members, including Berlin, support that recommendation. But not all.

But even with disagreement, Lambrecht said, the book proved helpful. Operating with hearts at peace, he said, “does not stand in the way of expressing hard truths.”

“We’re still able to say those things that need to be said, but it’s more in the way things are said and also the relationship.” 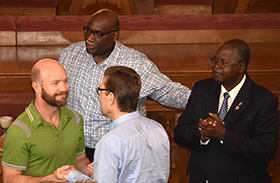 Matt Berryman, fellow commission member, agreed the book is helpful, but said the book falls short in dealing with situations where one group has far more power than another.

“If an elephant is standing on the tail of a mouse, it’s not the job of the mouse to have a heart of peace. It is the mouse’s job to say ‘Ouch. Stop,’” he said, riffing on a famous quote by Anglican Archbishop Desmond Tutu.

Berryman, who is openly gay, is former executive director of Reconciling Ministries Network, an unofficial advocacy group that calls for full equality of LGBTQ members. Under current church rules, Berryman sees LGBTQ individuals as the mouse.

Nonetheless, he also found the book most helpful in keeping everyone engaged and at the table.

“As a gay person, I never felt any kind of hate from them. I felt love from them and toward them,” he said. “They came from a place of deep conviction no less than I was coming with deep conviction.”

Retired Bishop Rosemarie Wenner of Germany said she hopes to see that same kind of enegagement at the 2019 special General Conference. She and other commission members are working to share the principles of the book with United Methodists in the central conferences — church regions in Africa, Asia and Europe.

“As soon as delegates and all who attend come with a heart in peace, we will be open for the Holy Spirit at work amongst us,” she said. “We will work for common ground instead of aiming for one group to win over the other.”

Bishop Sandra Steiner Ball said United Methodists will need a new approach to General Conference if they are to move through their impasse around homosexuality.
Bishops

Question to court: Who can submit petitions?

In a two-hour session, streamed online, Judicial Council heard arguments about petitions related to the special General Conference in 2019.