To find a way forward through its impasse around homosexuality, The United Methodist Church will need a new approach to its top policymaking body — General Conference.

That’s what Bishop Sandra Steiner Ball told members of the Connectional Table, a 64-member leadership body that brings together laity and clergy to coordinate the denomination’s ministries, mission and resources. The group met April 4-7 at the offices of Wespath, the denomination’s pension and benefits agency.

“Think about what the experience has been for getting ready for coming to General Conference,” said Steiner Ball, who leads the West Virginia Conference.

“When I ask that question of people across the globe, they begin to talk about preparing for General Conference like they are preparing for war.”

She urged the Connectional Table, whose membership includes some General Conference delegates, to help turn hearts ready for war into hearts at peace.

“Your purpose is to discern and articulate a vision for the church. You have responsibility for the stewardship for the mission, ministry and resources,” she told the group. “That puts you in the perfect position to help things go well.” 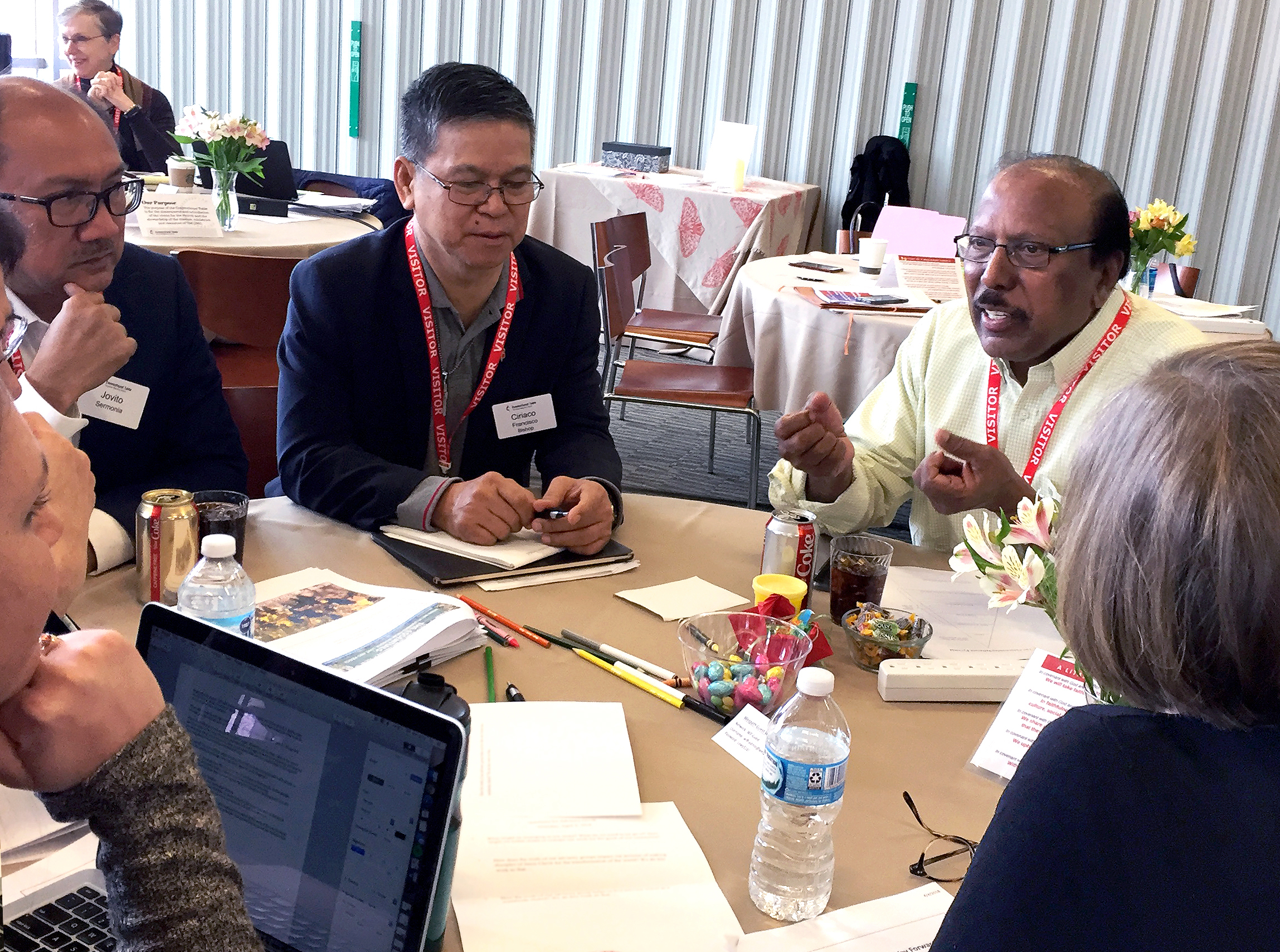 Members of The Connectional Table talk in a small group after a presentation on the Way Forward Commission. From left facing the table are members Jovito Sermonia of the Philippines, Bishop Ciriaco Francisco of the Philippines and the Rev. Jacob Dharmaraj of New York. Photo by Heather Hahn, United Methodist News Service.

Steiner Ball is one of three bishops who moderate the Commission on a Way Forward, which has the task of advising bishops on possible ways through decades-long divisions around how the church ministers with LGBTQ people. The commission is developing a final report for the bishops to use when they meet April 29-May 4. That report is not yet public.

The denomination’s Council of Bishops has called a special 2019 General Conference in St. Louis to take up legislation based on the Way Forward Commission’s recommendations. The delegates will be able to refine whatever the bishops propose or possibly work on substitute legislation.

Fierce and at-times hurtful debate about how the church includes LGBTQ individuals has erupted at each General Conference since 1972.

Steiner Ball made clear that the church would not get anywhere if people came to the big meeting girded for spiritual battle.

“When we see other people as objects, we give ourselves permission to horrible-ize them,” she said. “We set the stage for war when we exaggerate our difference.”

Ultimately, she said, United Methodists have common interests even if they have different positions around homosexuality.

She suggested United Methodists might help build relationships across differing views if they followed the covenant used by the Way Forward Commission. Specifically, she pointed to the members’ covenant “to treat one another with respect, to assume the best in others, to represent one another in the best possible light, to speak the truth with love, and to practice and expect trustworthiness.”

The commission’s report to the bishops, she said, will include three sketches for the church’s future. In recent meetings, the commission has focused on the last two, but all three remain on the table.

The three models are roughly as follows:

Under consideration in each of the sketches, Steiner Ball said, are different ways for handling funding matters such as bishops’ pay. For example, under the one-church model, bishops’ compensation might be funded by their episcopal areas rather than by the whole denomination as part of a shared Episcopal Fund.

Germain Mupasa, a Connectional Table member from the Democratic Republic of Congo, said through an interpreter that he was struck by Steiner Ball urging people to listen without trying to convince others of their perspective.

“In a roundabout way, I think we will fail,” he said, “because then how do we convince people?”

Steiner Ball answered that United Methodists likely won’t succeed in changing each other’s stances but they can find common ground in the shared interests that lie underneath.

After Steiner Ball’s presentation, Connectional Table members engaged in small-group discussions. Several spoke of how even during this time of uncertainty, they wanted to help the denomination continue to focus outward on its mission of making disciples for the transformation of the world.

In her presentation, Steiner Ball had another piece of advice for church leaders: Trust God.