A campaign to increase Africa University’s endowment fund to $100 million, as well as raise some additional funds for capital development, entered its public phase Sept. 12.

The Campaign for Africa University, a four-year effort to raise $50 million, was unveiled at a banquet celebrating the work of longtime supporter and board member Maggie Jackson, who is retiring from the board.

Lucas said the campaign will provide much-needed scholarships, funding for faculty chairs and for research support to help attract faculty. 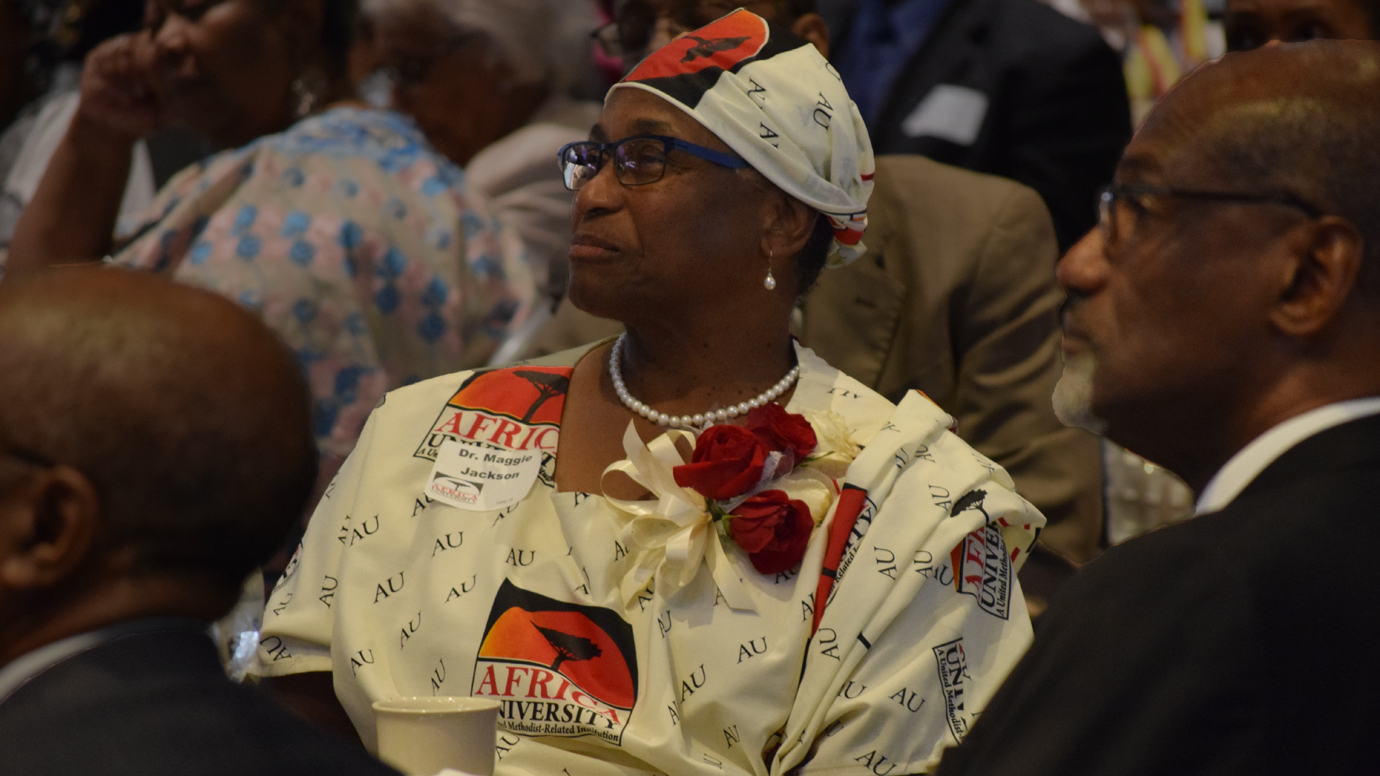 The work of longtime Africa University supporter and board member Maggie Jackson on behalf of the university was celebrated with a banquet in Cleveland. Photo by Rick Wolcott, UMNS.

“Another component of this campaign will upgrade our teaching and research facilities as well as our fast-changing technology,” Lucas said.

James Salley, AU’s associate vice chancellor for Institutional Development, told the Advisory Development Committee on Sept. 10 that $26.2 million in cash and pledges had been already been committed for the campaign.

The current endowment for the university is $63.4 million, Salley told the committee members. An endowment fund keeps the principal amount intact while the investment income is available for use, which allows donations to have an impact over a longer period than if spent all at once.

“It is my hope that the campaign will make possible new facilities and buildings, scholarships and endowed chairs that will enhance the university’s effectiveness in teaching and learning, research and innovation, and provide spaces for each student’s interaction and engagement,” Furusa said.

While the campaign began specifically to boost the endowment, Salley said the decision was made to seek additional donations for building and property improvements because of the age of many buildings on campus.

Salley added that this would be the first churchwide fundraising campaign for Africa University, since previous campaigns have mostly been at the conference level. The university will celebrate its 25th anniversary in March.

The Rev. Lloyd Rollins, who has been spearheading the silent phase of the campaign, said that the wear and tear of 25 years, coupled with an annual increase in the student body until this year, meant the campus had not kept up with its building needs.

A significant portion of the funds already raised for the campaign has come from United Methodist annual conferences, Salley said. As the campaign enters the public phase, donations will be sought from major individual contributors.

The campaign plans call for about $12 million to be raised through planned giving, such as legacy donors.

Byrd Bonner, president of The United Methodist Church Foundation, cautioned the development committee to think of more than wealthy donors.

“This is not on the backs of the wealthy alone, but on all who love the university,” Bonner said.

Salley reported on other fundraising efforts to the Advisory Development Committee.

Salley also reported that the Ubuntu Retreat Center, a $1 million project funded by the West Michigan Conference, is complete and has been housing guests. He told committee members some of them would be able to stay at the center if they attend the 25th anniversary celebration for the university in March 2017.

The center has 24 double rooms, as well as two conference rooms and an Internet café.

Brown is news editor for United Methodist News Service. Contact her at [email protected] or 615-742-5470. Wolcott is director of communications, East Ohio Conference.