Pauline Shongo believes that one day Africa University will be the key to peace on the continent of Africa.

So do the many who gathered on the campus of the United Methodist-related university March 22-24 to celebrate the school's first 20 years.

The university, located in Zimbabwe and established by The United Methodist Church in 1992, draws students from all over Africa. The current enrollment of 2,000 represents students from 29 countries.

From the beginning, Africa University has been a place where dreams come true.

"I think because of the diversity and the opportunity to get to know each other as friends we will someday bring peace to all of Africa because we have learned to love each other," said Shongo. A student from the Democratic Republic of Congo, she is majoring in economics and French.

Fanuel Tagwira, vice chancellor of Africa University, opened the weekend of celebration by reminding visitors, students, faculty and staff that "God has brought us this far to this beautiful valley of dreams."

In what seems a short 20 years, Africa University has grown from a school with classes in refurbished farm buildings to a world-changing university with more than 4,000 graduates throughout Africa and the world.

"We are creating new leadership for Africa. We seek to produce brave, bold, determined leaders to change the continent of Africa," Tagwira said. 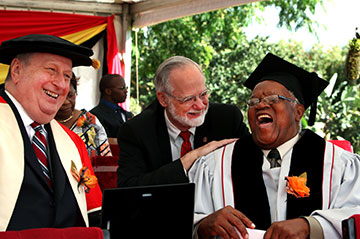 The Rev. Roger Ireson, who was top executive of the United Methodist Board of Higher Education and Ministry when the 1988 United Methodist General Conference approved the university, and the Rev. John W.Z. Kurewa, the university's founding vice chancellor, received honorary Doctor of Letters for their contributions. The Ireson-Kurewa building, completed in 1996, houses the Faculty of Agriculture and Natural Sciences and Humanities.

The two men met as young seminary students at Garrett-Evangelical Theological Seminary in the 1960s.

Ireson jokingly warned the students now at Africa University, "Be careful who you are in school with; you never know what might happen."

Both Kurewa and Ireson talked about the difficulties and the joys that lead to the university celebrating its 20th anniversary.

Kurewa accepted his award by recalling two stories of pioneers - one a faculty member and the other a student.

As the school was looking for faculty members, Kurewa knew he wanted Athanasius Mphuru as the dean of the Faculty of Agriculture and Natural Resources.

His determination to hire Mphuru led him on a long and messy journey - he fell in a hole of mud up to his neck at one point - to Tanzania. He was unable to see the professor, and he had to return home without talking to him. However, he left him a long letter that resulted in Mphuru calling him two days later to accept the position.

"At times this is what it takes to dig for something precious," he said. Mphuru is one of the pioneer staff members at Africa University, where he still teaches today. Twenty-two members of the pioneer staff still at the university also were honored during the celebration.

Bridget Sisney (orange sweater) and Usha Satish (periwinkle jacket), ambassadors from the Black College Fund, pose with the Africa University Choir during a break in the 20th anniversary celebration.

Kurewa's other story was of Solomon Kupa, a young man who was accepted at the university but had no money for transportation. He just started walking to the university from his home in Kinshasa, Democratic Republic of Congo. When he reached the border of Zambia and Zimbabwe, someone called the university to tell them the young man was there.

Kurewa said they were astounded and told the caller they would be there to get him. When they arrived at the border, the man said, "He is no longer here. When he heard he was accepted at Africa University, he left running."

Kupa eventually graduated with a bachelor of divinity degree in 1997 and is an evangelist/pastor today.

"Don't be scared; it is better to do something that has never been done before," Kurewa said. "If you believe this is what God wants you to do, go ahead and do it."

Ireson said of the many awards he has received, this Doctor of Letters means the most.

"It represents my friendships with many African people, church leaders, church members and is the fulfillment of many people's dreams. 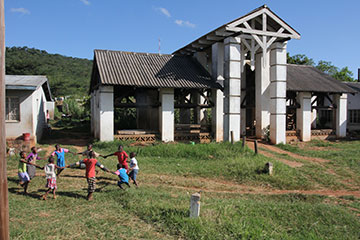 Children play a game on the farm at Africa University near one of the original buildings used when the school opened in 1992.

The afternoon concluded with the dedication of the Tom Trotter staff house and the Beulah Helen Reitz guesthouse.

Nancy Mikell Carruth, who passed away in 2012 at 84, made a gift to the university designated for the construction of a staff house in honor of the Rev. F. Thomas Trotter, who was top staff executive of the Board of Higher Education and Ministry during the planning and birthing of Africa University.

Trotter is considered one of the instrumental people who believed in the idea of establishing a university for Africa.

Carruth, an inaugural member of the United Methodist-related university's advisory development committee and planned giving council, was affectionately known to many as "Mrs. Africa University."

Carruth was present in October 1984 when Bishop Emilio De Carvalho of Angola and Bishop Arthur Kulah of Liberia made their historic appeals for The United Methodist Church to establish a university on the continent of Africa. Carruth became an impassioned advocate for the establishment of the new university.

Reitz served as a deaconess at the Old Mutare Mission Center in Zimbabwe from the 1930s to the 1960s. During her service, she taught many young African church leaders, including the late Bishop Abel Muzorewa. She died July 16, 1984.

The staff house was given in her memory by Barbara and James Holsinger. Reitz was Dr. Holsinger's cousin. Holsinger is a member of the Africa University board of directors.

Tagwira said the homes will be used to help keep more staff on campus and to provide accommodation for visiting lecturers.

"We ask you, O Lord, to bless those families for donating those facilities to this institution. We also pray that you grant us the power to be good stewards of your handiwork."

A day filled with music 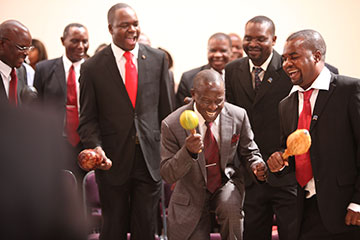 The Men's Association of the United Methodist Church, Harare West District, sings during the Palm Sunday worship at the Kwang Lim Chapel.

The anniversary celebration ended with a Palm Sunday worship service in the university's Kwang Lim Chapel with Keaton preaching.

Three exceptional choirs - the Africa University choir, the Men's Association of the United Methodist Church Harare West District and the Jubilate choir from the U. S. Pacific Northwest Conference - filled the chapel with music.

"If you feel like dancing, feel free," said the Rev. Philimon Chikafu, chaplain, as many in the congregation were already dancing in the aisles.

Keaton used Psalm 100:1-5, a psalm of thanksgiving, noting, "We've done a lot of praising this week but the Psalmist, in these verses, directs it to God which is the source of all praise."

"For 20 years, thousands have been investing in Africa University," he said. "The vision cast 20 years ago will go into the next 20."

Throughout the celebration, speaker after speaker recalled the names of those who gave so much to Africa University.

"We are standing on the shoulders of giants," said the Rev. Kim Cape, top executive of the United Methodist Board of Higher Education and Ministry. "My pledge for the next 20 years is to be faithful to your legacy."

Reflecting on the 20th anniversary, Angella Current-Felder, a member of the Africa University Development Committee and author of "The School of Dreams in the Valley of Hope: The Africa University Story," said, "I am thinking of God's amazing grace.

"Twenty years ago, we could not have imagined the fruits of our labor. It is more than we could even envision and I cannot imagine what it will be 100 years from now."