As Africa University celebrated the installation of its new vice chancellor, the 23-year-old United Methodist-related university’s board struggled with growing pains.

The board of directors at its March 20 meeting discussed aging buildings, overcrowded dorms and the need for more professors with doctorates to retain Zimbabwean accreditation of programs.

Bright spots included the announcement of an endowed professorship in agriculture and natural resources, a fundraising campaign for an endowed chair in theology, a record 31 U.S. United Methodist conferences that paid 100 percent of their apportionments to the university, and an endowment that stands at $63.3 million. In addition, 1,405 students used the new online registration system for the second semester of the 2014-15 academic year.

Munashe Furusa, who was inaugurated March 21 as the university’s top executive, reported on cost-cutting measures, a staff audit, a new program for a B.A. in media studies and planning for hospitality and tourism degree.

“We are looking at strategies to get people with Ph.D.s,” Furusa said. One of those strategies could be to help instructors or professors finish a doctoral program. Fifteen are now working on doctorates, Furusa said.

The Zimbabwe Education Ministry requires that 60 percent of instructors must have doctorates for accreditation of each faculty. A faculty at African University is the equivalent of a school or college at a university in the U.S. None of the faculties now meet that standard.

Furusa said he is developing plans to correct the problem by the end of 2016, but added that salaries and fringe benefits at Africa University are lower than at state universities in Zimbabwe. He said a candidate turned down an offer because of salary.

One strategy Africa University is exploring is to partner with the United Methodist Board of Global Ministries to find missionaries with doctorates to teach.

Bishop David Yemba, the university’s chancellor and a bishop in the Democratic Republic of Congo, said the university is at the right place, but growth is sometimes difficult.

“When we are growing, there are new challenges,” Yemba said.

“To have a university that is only 23 years old that has all of its buildings paid for and no debt is a university with great opportunities ahead,” said Matthews, leader of the Baltimore-Washington Conference.

Matthews said he is excited about the university’s new leader, noting that Furusa is the first vice chancellor with significant development or fundraising experience as well as 17 years of experience in higher education in the U.S.

“How do we improve the infrastructure to the extent that the university is attractive to parents and students?” Matthews asked, suggesting that dorm renovations, better sports fields and more recreational opportunities would be a start.

The board approved a 2015-16 budget of $12 million with a provision that if income is more than that amount, more can be spent. Last year, total income was $12.8 million and the university ended the year with a $4,000 surplus, the finance committee report said.

Furusa said the university has 353 employees — 208 permanent and 115 on fixed-term contracts — for about 1,500 full-time students and another 1,000 enrolled part-time or through distance-learning programs. The staff includes more than 100 full-time professors, along with part-time and visiting lecturers. “This suggests the existing staff load is high for an institution of our size,” he said. 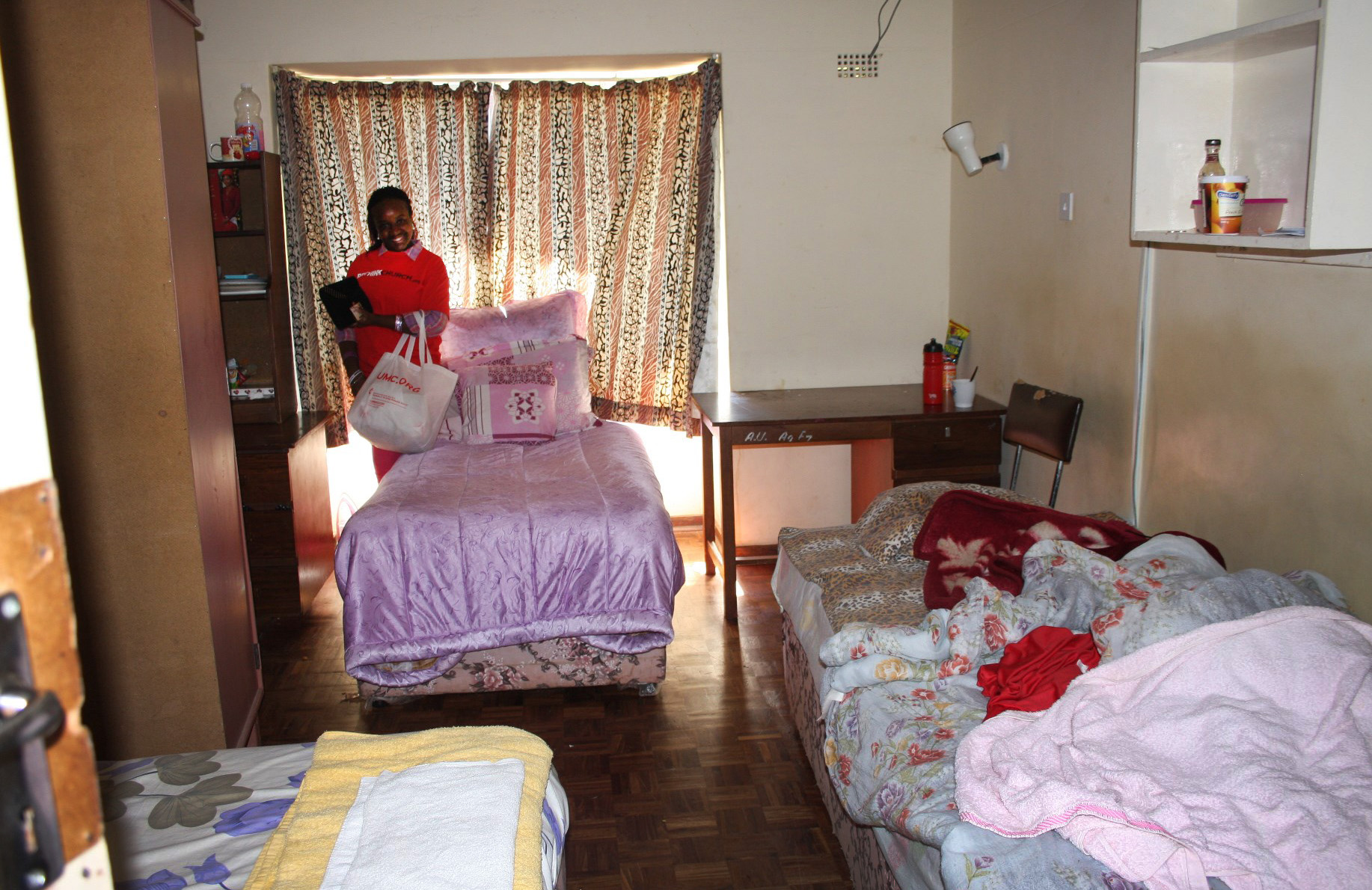 Three beds are visible in Tapiwawashe Muganyura's room in one of the women's residence halls at Africa University. The board of directors encouraged Vice Chancellor Munashe Furusa to come up with a plan to renovate the aging buildings and build new ones. Photo by Vicki Brown, UMNS

“Accommodation for students remains a major challenge,” Furusa told the board.

Students now are living three to a room in rooms planned for two, with 27 students housed at a women’s center in Mutare and others living at the Fairfield Orphanage at Mutare Mission. Some common areas in the residence halls have been converted to living space, the building and grounds committee reported.

“I am saddened by the condition in which our students live,” said Maggie Jackson, the committee chair. The committee urged management to come up with a detailed plan for refurbishing the residence halls, seek funds for new residence halls and consider using more off-campus housing to reduce crowding.

Students and alumni agree that more dorm rooms and recreational facilities are needed, although a gym has been set up in a vacant room. During the inauguration, donations announced included more than $120,000 toward a new women’s dorm.

Tapiwawashe Muganyura and Joshua Madzivanyika, both students from Zimbabwe, agreed that more and better residence halls are needed.

“For me, I’d like to see us boost extracurricular activities,” Madzivanyika said.

Alumni also are concerned about residence halls. Angeline Mafembo, a graduate who teaches at Watershed College in Zimbabwe and has a young sister who attends Africa University, said she worries about the safety of women who live off campus.

More than one board member said plans need to be drafted and estimates prepared so money can be raised for building new dorms.

Margaret Makadzange, a member of the board of directors, expressed concern that the residence halls and other issues discussed by the board were long-standing problems. “We have been talking about these things for many meetings. What is the way forward?”

Furusa reported to the board that the Ubuntu Retreat Center is not finished. The West Michigan District of the Michigan Conference raised $500,000 for the center. A timeline for completion was drawn up, and final payments are being withheld. Under an adjudication agreement of the dispute, if the contractor does not adhere to the completion timeline, the company can be replaced, Furusa said.

Furusa agreed that the university faces many challenges, but said plans are being developed and actions taken.

“At times it seems as though everything becomes a priority,” he told the board.

Brown is news editor for United Methodist News Service. Contact her at [email protected] or 615-742-7400.