Much of the annual meeting of the African American caucus of The United Methodist Church focused on major changes being proposed to the now-delayed General Conference, as well as the views of black church leaders.

During its 53rd annual meeting, Black Methodists for Church Renewal endorsed the Protocol of Reconciliation & Grace Through Separation, a plan for amicable separation of the church.

A panel of episcopal leaders known as the Ebony Bishops discussed the protocol plan that seeks to resolve a decades-long impasse over ordination of openly LGBTQ clergy, allowing same-sex weddings and the Book of Discipline description of homosexuality as “incompatible with Christian teaching.”

About 300 BMCR members heard several presentations and a dialogue about the protocol plan at their annual gathering March 4-7, in Kansas City, Missouri. All of those plans are momentarily on hold now that public health concerns about the coronavirus pandemic led to the postponement of General Conference, the denomination’s top lawmaking assembly, which was scheduled for May in Minneapolis.

Two of the seven bishops who addressed BMCR were involved in the protocol negotiations.

“There was give and take on all sides,” said Bishop LaTrelle Easterling, co-convener of the Ebony Bishops. She urged patience in getting the protocol passed to create a more progressive-centrist, post-separation United Methodist Church.

And she responded to concerns about whether institutional racism would be adequately reckoned with in that remaining denomination.

“When the new United Methodist Church is formed, that’s when every constituency and interest group needs to rise up and say, ‘Now’s the time for our voices to be heard. ... We want to make sure we don’t continue any of the mistakes, deficiencies and sins that occurred with the prior denomination.

“How will power be dealt with in this new entity?” she asked. “How will we learn from the racism, sexism, ableism, homophobia? How will we learn from the ills that plagued us in our former judicatory? If you have to storm the stage at General Conference, that’s when I hope you will say, ‘We will not move forward until we are assured that priorities of this new denomination will include our priorities.’”

Easterling, who leads the Baltimore-Washington Conference, praised the proposed allocation of $39 million to support racial-ethnic ministries and Africa University. “But that is a floor, not a ceiling,” she said. “It doesn’t mean other funds cannot be requested and given.” 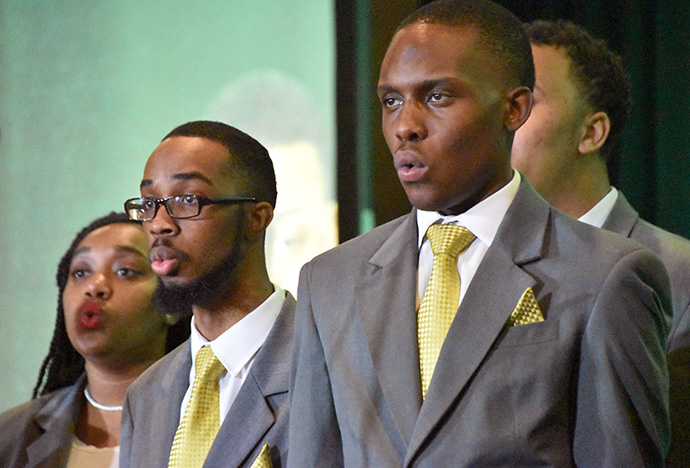 Members of the Philander Smith College choir sing during the Black Methodists for Church Renewal meeting in Kansas City, Mo. Philander Smith, in Little Rock, Ark., is one of the historically black colleges and universities supported by The United Methodist Church. Photo by John W. Coleman.
In the church’s centuries-long history of restructuring, Easterling said this is the first time in the life of the denomination that, “the concerns and interests of the black church were central.”

West Ohio Conference Bishop Gregory Palmer told the members that his commitment to the protocol negotiations was “predicated on the intent of having a United Methodist Church in the end.”

He invited critique of the protocol plan and legislation but cautioned, “Let’s not do that without coming to a conclusion. Let’s not filibuster it to prevent a fair vote.”

The statement said the legislation allows BMCR to continue “its mission of action, advocacy, affirmation, and agitation for the unique needs of black people in The United Methodist Church,” by setting aside $39 million of funding for the racial-ethnic caucus and ministries over eight years.

The caucus’ board of directors said it had listened to “the voices of our constituents” in favoring the plan that a group of 16 international United Methodist leaders made public in early January after months of confidential negotiations.

Indiana Conference Bishop Julius Trimble also expressed support for the protocol and denounced attempts to get black churches to leave and join a new denomination.

“Historically, we have been one (people) who have never left. When we’ve stayed, it was with a purpose to bring change and renewal,” Trimble said.

East Ohio Conference Bishop Tracy Malone reported on a Chicago meeting in October 2019 that convened diverse black United Methodist leaders from across the denomination to discuss all the viable plans. That meeting, hosted by the Ebony Bishops, included leaders of BMCR, the Black Clergywomen’s Association, the Strengthening the Black Church for the 21st Century Initiative, the United Methodist Commission on Religion and Race and other groups. It resulted in ongoing task groups, guided by Religion and Race and SBC21, to address various strategic concerns and an official statement by the Ebony Bishops.

Malone said the talks revealed a need to build more collaboration and to help black churches and General Conference delegates be more mindful of various issues, perspectives and strategies.

Another panel gave details on the protocol and other petitions to be considered by General Conference. The Rev. Cedrick Bridgeforth of Los Angeles briefly reviewed all the major church restructure plans and petitions, plus SBC21’s Jubilee Freedom Today petition. The little-known petition drew favorable reactions from the crowd for its various proposals, including allowing black churches the option to disaffiliate from the denomination with ownership of their property.

The Rev. Kennetha Bigham-Tsai, the top executive of the Connectional Table that coordinates the ministries of general church agencies, reviewed the petition to create a U.S. regional conference comprising U.S. geographic jurisdictions and annual conferences, similar to the current structure of central conferences in Africa, Europe and the Philippines.

“A U.S. Regional Conference is where the U.S. can do its own contextual, adaptive work,” she explained, addressing trust clause claims, clergy pensions, racism and other matters pertinent to the U.S. The legislation calls for an interim step of creating first a General Conference U.S. Regional Committee that would prepare the way for creation of the new regional conference. 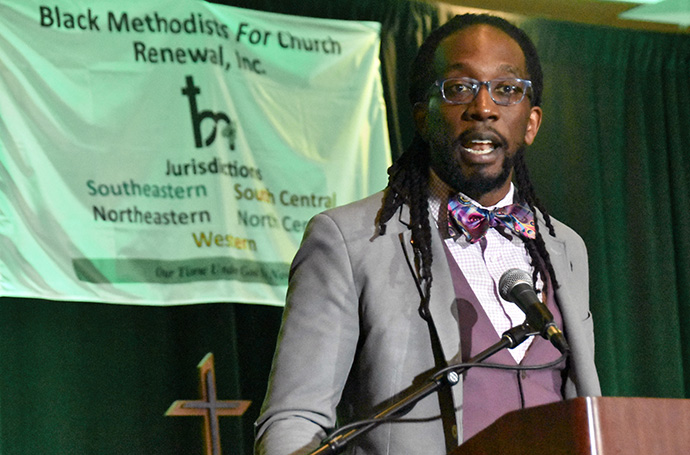 The Rev. Jay Williams introduces the New Expressions Worldwide (N.E.W.) Plan, which he helped to draft, during the Black Methodists for Church Renewal meeting in Kansas City, Mo. It proposes dissolving The United Methodist Church and instead forming four new global denominations to span different viewpoints. Photo by John W. Coleman.
Williams shared his longtime love for BMCR and his personal struggle as a publicly queer (gay) black clergyman in a traditionalist-leaning denomination and black church culture, where he sometimes feels his full identity is not accepted or valued.

“Although BMCR has helped form me as a black, Christian man and has been family for me,” he said, “I must say, sometimes it’s hard to come to the family reunion.”

The Rev. Junius Dotson, head of United Methodist Discipleship Ministries, talked about the legislative strategy for the protocol and appealed to members to support that petition and the U.S. regional conference, which could strengthen its chances of approval.

Other highlights included workshops on preparation for General Conference, proposed revisions to the United Methodist Social Principles, and how to “engage young adults and cultivate thriving congregations.”

The caucus elected the Rev. Antoine “Tony” Love as its new chairperson, succeeding Deborah Dangerfield. Other top officers elected are Deborah Bass as vice chairperson, Gertrude Jarrett-Stewart as secretary and the Rev. Ouida Lee as treasurer.