“As you pray, I urge you not to suggest to God what you want God to do to bring about change,” said Bishop Cynthia Moore-Koikoi said in a statement. “But rather, I urge you to listen to God so that God can reveal to you what to say and what to do in order to provide comfort to our Jewish sisters and brothers, the first responders and all those for whom this tragedy reignites previous trauma.”

The shooting Oct. 27 at Tree of Life Congregation Synagogue in the Squirrel Hill neighborhood was allegedly the work of 46-year-old Robert Bowers, who was wounded and is charged with 29 federal counts and 11 state charges in the attack, reported NBC News.

The attack is likely the deadliest attack on the Jewish community in the history of the United States, according to the Anti-Defamation League. The victims ranged in age from 54- to 97-years old.

“These killings should serve to remind all of us to work to eradicate antisemitism,” said Jim Winkler, president and general secretary of the National Council of Churches. “This tragedy takes place in the broader context in our nation of a resurgence of gun violence and white supremacy. Our struggle for justice and peace takes place across numerous fronts.”

The United Methodist Women issued a statement linking the shooting to other societal ills.

“At a time of rising vitriol, racism, hate and violence in the world born of deep economic crisis and global shifts, it is time for the church to speak out,” said the statement. “If we do not, God will be appalled. We feel compelled to raise a prophetic voice challenging the climate of distrust, distortion of truth and fear, shifting the conversation to our common future.” 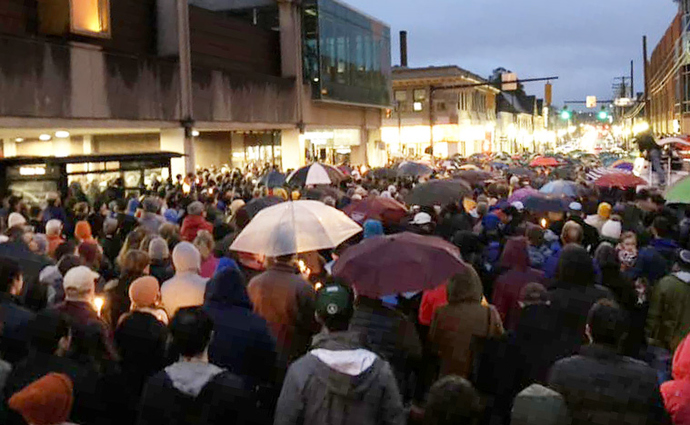 Thousands join an outdoor vigil in Pittsburgh for victims of the shooting at the Tree of Life synagogue. Photo by the Rev. Dawn Hand.

Closer to home, a United Methodist professor at the Pittsburgh Theological Seminary said he was familiar with Tree of Life Synagogue, which had very positive relations with the seminary.

“First of all, we need to make very, very, very clear that hatred and violence to the Jewish community is in no way acceptable to the church,” said Steve Tuell, the James A. Kelso Professor of Hebrew and Old Testament. “There certainly is no excuse for thinking in terms of us versus them. There is simply us.”

More than a thousand people turned out for a Oct. 27 vigil to honor the victims that was organized by students at Pittsburgh's Allderdice High School, near the scene of the massacre, the Western Pennsylvania Conference reported. An interfaith prayer service was held at nearby at Sixth Presbyterian Church.

United Methodist clergy and lay leaders in the Pittsburgh District immediately reached out to the rabbis and synagogues to determine how they might be supportive, Moore-Koikoi said.

Sewickley United Methodist Church in Sewickley, Pennsylvania, held an interfaith service Oct. 28 to mourn the synagogue attack. A rose for each victim was displayed in the sanctuary.

“It was an emotional event,” said the Rev. Russell Shuluga, pastor of Sewickley. “It was a very somber environment and many tears were shed. It was necessary to come together to find comfort with each other and God.”

The Rev. Olav Fykse Tveit, top executive of the World Council of Churches, sent the council’s “condolences to the families, the synagogue and the city of Pittsburgh for the shocking violence and loss of life.

“We are conscious of both the short-term trauma and long-term grief this situation poses to you,” said Tveit in a statement. “Antisemitism is a sin against God and humanity … and this attack upon a Jewish community in a place of prayer and during a moment of celebration of their religious identity is an appalling violation of our shared humanity.

The ecumenical officer for the United Methodist Council of Bishops wrote to the Tree of Life congregation with a “heavy heart,” and quoted 1 Peter 3. “Our holy Scriptures tell us to ‘have unity of spirit, sympathy, love for one another, a tender heart and a humble mind,’” said Bishop B. Michael Watson.

“We are very aware we very often fall short of that calling,” Watson said  “We want to be better than we are, and we long for a world of peace and unity.  We join our prayers with yours for that kind of shared future.”

Bishop Moore-Koikoi urged United Methodists to focus on the immediate needs of those affected by the shooting, but said later, the church will need to turn to other issues.

The anti-racism work of the church is just getting started after the first year of the Dismantling Racism campaign, say bishops and others.
Racism