The United Methodist Council of Bishops is getting a range of reactions to its recommended way forward for a denomination long divided around how to minister with LGBTQ individuals.

The bishops themselves have interpreted their action in different ways, and the denomination’s advocacy groups are making their varied perspectives known.

The Council of Bishops, by a majority vote, recommended what it is calling the One Church Plan “as the best way forward for The United Methodist Church,”according to a May 4 press release.

The plan would allow decisions about whether to ordain LGBTQ clergy or to officiate at same-gender unions to be made closer to the local level.

Currently, The Book of Discipline, the denomination’s policy book, says the practice of homosexuality “is incompatible with Christian teaching” and prohibits pastors from officiating at a same-gender union or being a “self-avowed practicing” gay clergy member. 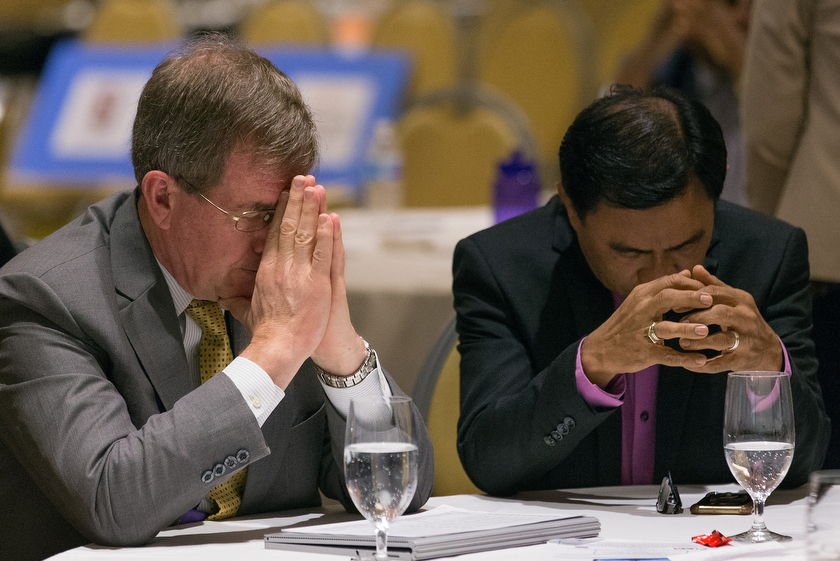 Some clergy and conferences already publicly defy these prohibitions. The Western Jurisdiction in 2016 elected Mountain Sky Area Bishop Karen Oliveto, who is openly gay and married to a deaconess. She was among the bishops who met last week.

The One Church Plan “is a way for us to honor the unique mission that is happening in local churches and in different regions of the church, and therefore begins to extend the witness of The United Methodist Church,” Dakotas-Minnesota Area Bishop Bruce R. Ough, outgoing Council of Bishops president, said in a short video about the plan.

However, the bishops also announced they would be submitting two additional plans in their report to the special General Conference on Feb. 23-26, 2019, in St. Louis. All three plans garnered a level of support among the bishops. Ough said May 4 that the bishops would not be releasing a vote tally.

The Traditionalist Plan maintains and aims to increase enforcement of the denomination’s current stance on homosexuality. The Connectional Conference Plan aims to restructure the denomination to allow U.S. churches to align based on theology on LGBTQ ministry — be it traditionalist, progressive or allowing for a variety of approaches.

Depending on which bishop is making a statement, the emphasis is either on the recommendation for the One Church Plan or about the three options moving forward.

“General Conference will have all three plans in front of them for consideration, and has the right to adopt, amend or reject any of them,” said Bishop Scott Jones in a message to the Texas Conference. He added that “there was significant support” for the other two plans as well.

Bishop LaTrelle Easterling said in a message to the Baltimore-Washington Conference that the One Church Plan received overwhelming support. “The council’s recommendation will include the other two models for informational purposes,” she added.

Like most of his colleagues, Bishop Ruben Saenz Jr. urged the Great Plains Conference to pray each day in the approach to General Conference. Specifically, he asked church members to pray the Lord’s Prayer and Psalm 23 each day. 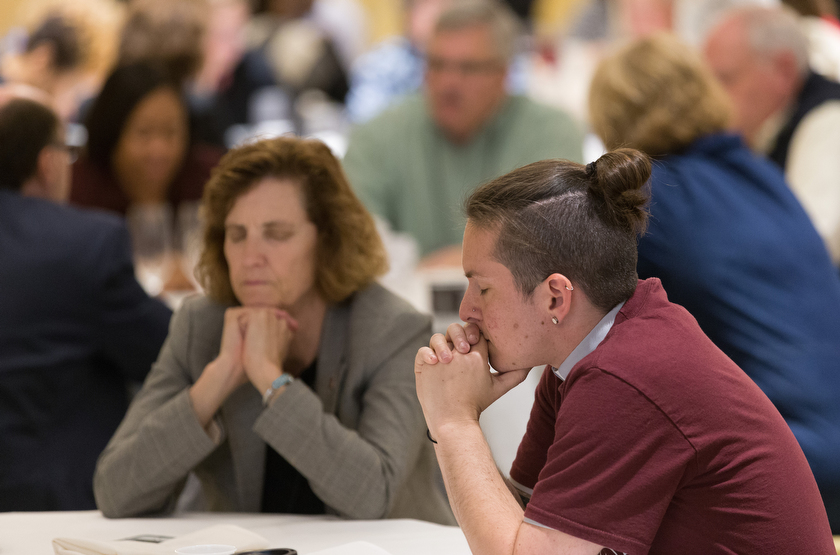 The Rev. M Barclay (right) joins in prayer with Bishop Laurie Haller during the "Praying Our Way Forward" closing worship at the Council of Bishops meeting. Barclay, the director of Enfleshed, is the first “non-binary trans person” to become a United Methodist deacon. Photo by Mike DuBose, UMNS.

Members of both the Queer Clergy Caucus and another group, Love Prevails, were present throughout the bishops’ meeting, attending morning worship and sitting in the lobby during closed sessions. Both groups advocate for the equality of LGBTQ people in all aspects of church life.

The Rev. Alex da Silva Souto, pastor of New Milford United Methodist Church in Connecticut and a leader of the Queer Clergy Caucus, worries that the One Church Plan’s emphasis on contextualization could lead to the erosion of standards that assure inclusion of women and ethnic minorities around the multinational denomination.

Souto’s preferred remedy would be simply to remove the Disciplinary language that condemns the practice of homosexuality.

“The only remedy we are able to possibly do as a denomination right now is to stop the harm,” he told United Methodist News Service. “We need to remove the language — no restructure, nothing added because we haven’t had time to process it. We haven’t had time to understand the consequences.”

Sue Laurie, a member of Love Prevails who was at the meeting, said eliminating the restrictive language in the current Book of Discipline is one good part of the recommendation.

However, she is frustrated and concerned that it is moving the discrimination to local levels. “We hoped for a clean plan, one that eliminates the language against our community,” she said. “That local annual conferences can continue in their own prohibitions against the ordination of faithful queer candidates for ministry is regrettable and dangerous. It continues the harm within our denomination. It offends the Gospel of Jesus Christ.”

Another unofficial group, the Wesleyan Covenant Association, urged adoption of the Traditionalist plan. The Rev. Keith Boyette, the group’s president and a reserve delegate to the special General Conference, briefly attended part of the Council of Bishops meeting to introduce himself to some bishops. 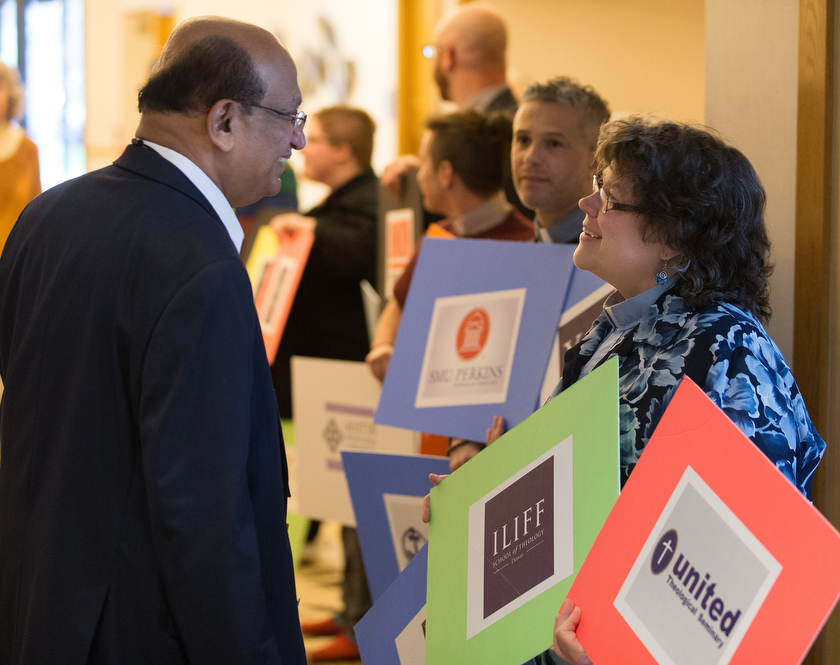 “Both the One Church Model and the Connectional Conference Model, as described thus far, contain elements which are inconsistent with the vision of the Wesleyan Covenant Association for a faithful and fruitful future for the people called Methodist,” he said.

Good News and the Confessing Movement, two other traditionalist groups, were glad their preferred option would be part of the bishops’ report.

“This puts the Traditionalist plan rightfully on an equal footing to be considered by the delegates to the special session along with the bishops’ preferred plan, the One Church Plan, which has been repeatedly rejected by the General Conference,” said the Rev. Rob Renfroe, Good News President, in a statement.

But all three groups were unhappy the bishops did not immediately share specifics of the three plans.

“The Confessing Movement is disappointed that the Council of Bishops is not releasing the details of the plans now when the best opportunity for clergy and laity to have dialogue and understanding around the plans could be held during annual conferences,” the group said in a press release.

Reconciling Ministries expressed disappointment in the Council of Bishops’ statement, saying none of the options celebrate or welcomes LGBTQ people. Jan Lawrence, executive director said, “The harm caused to LGBTQ persons is the singular reason this process was undertaken.”

“We envision and hope for a clear path that fulfills the Gospel call to lift the least and marginalized. We do not see that path in this decision.”

The Rev. Adam Hamilton, pastor of United Methodist Church of the Resurrection in Leawood, Kansas, shared his thoughts on Facebook. Hamilton is a leader of Uniting Methodists, an advocacy group that has already declared its support for the One Church Plan.

“I believe the bishops made the best decision they could,” Hamilton wrote. “I think they made the wisest choice they could make, and I’d like to believe the Spirit guided them. This is the essentially very similar to the recommendation 3,000 pastors and lay leaders endorsed four years ago, including many of the pastors of our leading churches.

“It protects conservatives from being forced to officiate at same-sex marriages, and it permits progressives who wish to do so, to do so. I suspect the vast majority of United Methodist clergy are not sure how they feel about officiating at a same-sex wedding ceremony, and they would not be required to officiate if they were not certain this was something God was calling them to do.”

The bishops announced that full details of the plans and accompanying legislative proposals will be released as soon as final editing of the entire report is completed and translated into the official languages of the General Conference. Petitions to the special General Conference are due by July 8.