Rejecting the denomination's stance on gay rights and same-sex marriage were important issues for at least 15 United Methodist annual (regional) conferences this summer.

The law was signed by the governor in February and would have made Washington the seventh state to allow same-sex marriage. The law was set to go into effect June 7 but Referendum 74, an anti-gay marriage measure, got enough signatures to put the initiative on the November ballot and put the law on hold.

During the June 21-24 meeting, delegates also approved a resolution to address "a lack of congruence between the denomination's hardened stance against homosexuality and its historic affirmations of the rights for all people."

At the Iowa conference June 2-5, more than 500 signed a "Do No Harm" covenant stating the denomination's top lawmaking body made decisions that violated John Wesley's first General Rule by failing to acknowledge that members of The United Methodist Church are divided on homosexuality.

Members of the Minnesota Annual (regional) Conference, meeting May 30-June 1, voted to send a resolution opposing a proposed amendment to the Minnesota state constitution that only a union of one man and one woman will be recognized as marriage. The proposal will be on the November ballot.

"Hundreds of thousands of current and potential United Methodists in Minnesota would benefit from equal protection of civil rights," the resolution's sponsors said.

In the New York Annual (regional) Conference, some delegates were so disappointed with the church's decision not to change the Book of Discipline that they were considering a study about leaving the denomination. However, two proposals more welcoming to gay, lesbian, bisexual, transgender persons were approved in their June 2-6 meeting in Hempstead, N.Y. One calls for a study committee for an inclusive conference and the other affirms the conference's historic commitment to the "rights and privileges of all persons, including LGBT persons." 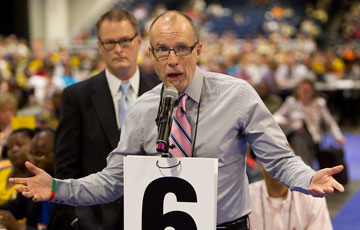 The Rev. Mike Slaughter (front) and the Rev. Adam Hamilton speak in favor of legislation that would have acknowledged that United Methodists disagree on issues of sexuality during the denomination's 2012 General Conference in Tampa, Fla. A UMNS photo by Mike DuBose.

The Rev. Taka Ishii, a retired pastor in the conference, said the basis of the New York petition was the amendment proposed to the 2012 General Conference by two megachurch pastors, which said the church was in disagreement over the issue of homosexuality.

The proposal by the Rev. Adam Hamilton, senior pastor of the United Methodist Church of the Resurrection in Leawood, Kan., and Mike Slaughter, pastor of Ginghamsburg Church, Tipp City, Ohio, was cited at several conferences as a good compromise that failed during the 2012 General Conference in Tampa, Fla., April 24-May 4.

The United Methodist General Conference is the only entity that speaks for the church and it meets only every four years in a global gathering.

The United Methodist Church amended its law book in 1972, adding the phrase "homosexuality is not compatible with Christian teaching." At every global gathering since, petitions to change that statement have been offered and rejected.

"I was disappointed that General Conference could not even agree to disagree," said Bishop John Schol in his address to the Baltimore-Washington conference. "I think there is a Christ-like path that we, as The United Methodist Church, have failed to find."

Differences on the 'right thing'

The growing church in Africa had more delegates and added more voices to the 2012 gathering than previous meetings. African delegates joined with U.S. opponents to changing the church's stance.

Representatives from Good News, an unofficial conservative caucus, reviewing the 2012 meeting said, "It is grievous that General Conference has become a place of such pain and protest. We do not take their tears lightly. &ellipsis We do not celebrate in their pain."

Several weeks later, Good News took issue with a sermon by retired Bishop Melvin Talbert at the California-Pacific Annual Conference which he titled, "Do the Right Thing!"

Talbert, preaching the ordination sermon, recalled his own experience as a young pastor as well as the recent history of the church. He referred to a speech he gave at the 2012 United Methodist General Conference where he encouraged 1,100 pastors who had signed pledges to perform same-sex marriages in the normal course of their pastoral duties to "stand firm."

In a June 29 editorial published by Good News, "The Sermon of Division and Defiance," the editors challenged Talbert's appropriateness to encourage new ordinands to defy church law.

"Friends it can grow tiring to hear the news that there are actually United Methodist leaders who are actively being applauded for wanting to instigate division and discord within our church. But we need you to stand with us to do the right thing," the article concluded.

California-Pacific, California-Nevada, Rocky Mountain, Desert Southwest and Oregon-Idaho conferences recommitted to their "We Will Not Be Silent" resolution made by the Western Jurisdiction in 2000 and updated in 2004.

In the Northeastern Jurisdiction, Greater New Jersey will have a conference-wide "Day of Prayer & Healing" on Sept. 30 for those hurt by conversations around human sexuality.

The Arkansas Annual Conference in the South Central Jurisdiction committed "to approach with respect and humility the differences faithful United Methodists have concerning the issue of homosexuality; and to encourage a series of sacred conversations about human sexuality, with a theologically diverse task force."

*Gilbert is a multimedia reporter for the young adult content team at United Methodist Communications, Nashville, Tenn. Information for this report came from annual conference reports submitted by conference communicators.