• The Filipino bishop died at age 87 of complications from COVID-19.

Bishop Daniel C. Arichea Jr. — a Bible scholar who championed full inclusion of LGBTQ people in church life — died June 1 in Taguig, Philippines, of complications related to COVID-19. He was 87.

As a Bible translator, Arichea helped make Scripture more accessible to people in multiple countries, including his native Philippines.

As a bishop, he led United Methodists in the Baguio Episcopal Area in the northern part of the country from 1994 until his retirement in 2000. He also made an impact on the global denomination.

“Bishop Arichea was a courageous voice for justice for all of God’s children, especially LGBTQ persons,” said Council of Bishops President Cynthia Fierro Harvey, who also leads the Louisiana Conference.

“Bishop Arichea was a mentor, a visionary and an encourager to many bishops, colleagues and laity. He had a heart for mercy and justice and stood for what was right often when it was not popular.”

For decades, The United Methodist Church has faced increasingly intense debate over scriptural interpretation related to LGBTQ marriage and ordination. To resolve the debate, the international denomination now faces multiple proposals to split along theological lines at its next General Conference — postponed by COVID-19 to 2022.

However, Arichea — called “Danny” by his friends — has long been clear on where he stood, both on his commitment to inclusion and to The United Methodist Church.

At the time of his death, Arichea was a board member of Reconciling Ministries Network, an advocacy group seeking LGBTQ equality in the church. He also was a proponent of the Christmas Covenant, a proposal for regionalizing governance in the future United Methodist Church.

Throughout his advocacy work, the bishop continued to live and serve in the Philippines, where the church is largely traditionalist on matters of marriage and ordination. 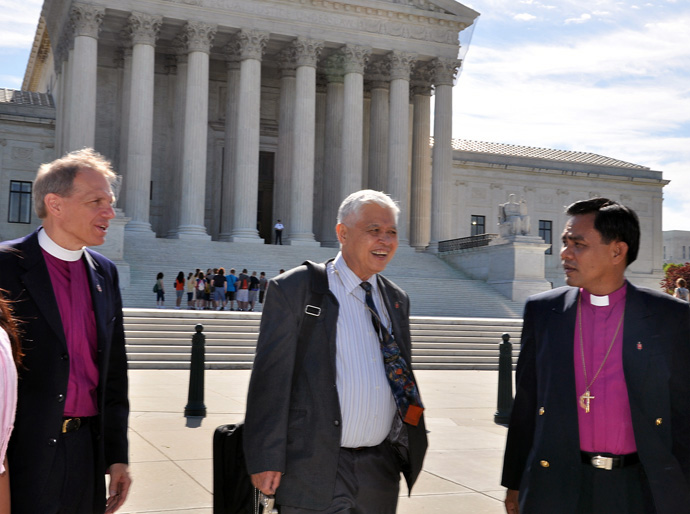 The Rev. Israel I. Alvaran, a Reconciling Ministries Network organizer and Philippines native, got to know the bishop when the two were teaching at United Methodist-related Union Theological Seminary in Manila.

“As a gay man, it meant a lot to me that a bishop of the church affirmed me and loved me and accepted me,” Alvaran said. “Bishop Danny, for me, was the face of the church that loved unconditionally. He basically exemplified grace in true Methodist fashion.”

Alvaran said an online prayer service after Arichea fell ill drew conservative and progressive United Methodists in the Philippines who poured out prayers for the bishop.

“He transcended the divide of biblical and theological differences,” Alvaran said. “He was truly a bishop for all people.”

In one of his final Facebook posts, Arichea offered a meditation on Pentecost when Christians celebrate the Holy Spirit descending on Christ’s disciples.

“Pentecost should be a daily, or better, a constant part of the life and experience of all believers: preachers, teachers, lay people,” the bishop wrote. “And why is this so important? Because there is not one segment of our lives that we do not need the presence and the guidance of the Holy Spirit.”

Early in his ministry, he served churches in Bataan and Manila and then taught New Testament for eight years at Union Theological Seminary. In 1969, he joined the United Bible Societies, a worldwide network aimed at increasing access to the Bible.

With the network, he served as a Bible translation consultant in the Philippines, Thailand and Indonesia. He eventually served in Hong Kong as the network’s Asia-Pacific regional translation coordinator, a position he held until his election to the episcopacy.

As a translator, Arichea often had to travel. But his daughter Miriam Ruth Arichea said, her father made it back home for her and her brothers' concerts and special school events. "He got to be the parent who came bearing gifts from overseas trips," she said. "He was very much part of the family life."

She said she looked up to her father and the way he handled his ministry. "He had the perfect job — the job where you are intellectually challenged but doing such amazing work for other people and for God," his daughter said. "He was working to bring the kingdom of God on earth."

Throughout his ministry, Arichea continued to write articles on the Bible. He also co-wrote four handbooks for translators with fellow Bible scholars. Among his writing partners was the linguist Eugene A. Nida, who as executive secretary of the American Bible Society was the guiding force behind the Good News Bible translation.

Bishop Kenneth Carter, who leads the Florida Conference, recalled talking to Arichea about the Good News Bible and learning that the late bishop also contributed to the translation.

“His love of the Bible led him to a conviction that we shared, that the good news of Jesus Christ is for all people,” Carter said. “He was a leader with integrity, filled with the fruit of the Spirit, especially joy, and his witness will be greatly missed.”

The Rev. Amy Valdez Barker described Arichea as a visionary leader. When she was the top executive of the Connectional Table, the denominational leadership body in 2014 invited Arichea to speak on a panel about the Bible and homosexuality.

“He was thinking 10 generations forward, not just where we are at as The United Methodist Church,” said Valdez Barker, who is now a visiting professor at Emory University’s Candler School of Theology in Atlanta. 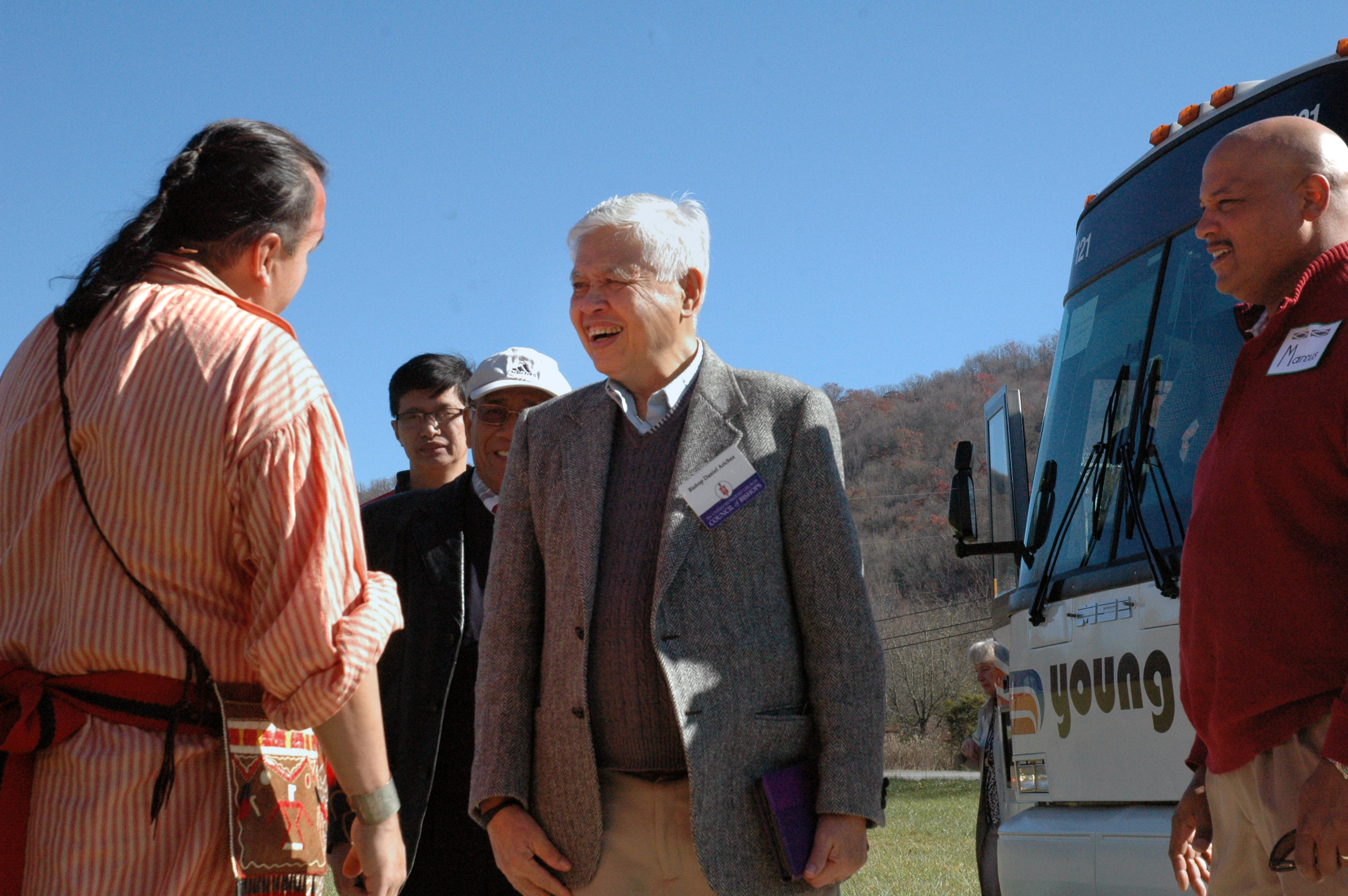 Retired Bishop Daniel C. Arichea Jr. (center) is greeted by Bo Taylor (left) and Marcus Robinson (right), both members of Cherokee United Methodist Church, during a trip to Cherokee, N.C. Members of the United Methodist Council of Bishops participated in an “emersion experience” during the 175th year anniversary of the Trail of Tears. 2013 file photo by Annette Spence.

That support was apparent when early in her tenure, all bishops gathered for a group photo.

“As I found a place to stand, I watched as Bishop Arichea made his way through the crowd to stand behind me,” Oliveto recalled. “He bent down and whispered, ‘I want you to know I will always have your back.’ And he always did.”

The Rev. Donald E. Messer, co-chair of the United Methodist Global AIDS Fund, said Arichea and the bishop’s wife, Ruth, facilitated his trips to the Philippines to advocate for HIV education and prevention. Messer said the couple also spoke at AIDS conferences.

The Rev. Bener Agtarap, who began his ministry planting churches in the Philippines, takes comfort that Arichea’s impact on ministry will outlast his time on earth.

“He will never be forgotten,” said Agtarap, who now leads the denomination’s church-planting initiative Path 1. “In fact, his presence will be strong as ever for his teachings, examples and services to God and to the church and the world will always guide our work, strengthen our ministry and inspire us to do greater things for Christ, to whom Bishop Danny fully surrendered his love and devotion.”

In a Facebook post letting the bishop’s many loved ones know of his passing, his wife offered words of comfort.

“His children, faith children, friends and kin, rejoice for the bells of heaven are ringing joyfully! He is now home! Thanks be to God!” she wrote.

In addition to his wife of 57 years and daughter Miriam, Arichea’s survivors include children Stephen and Michael and grandchildren Joshua Thomas, Arielle Marie, Daniel Benjamin, Ansel, Evan and Rizzi.

Bishops are trying to set the record straight on misinformation being spread about The United Methodist Church’s future. They also are working toward building a church where traditionalists, centrists and progressives will all feel they belong.
Violence

The Rev. Tori Dr. Butler interviews the Rev. Dr. Jalene Chase about how clergy can ensure their own safety in challenging situations.
Bishops

Bishop Bob Spain, who served as the United Methodist Publishing House’s chaplain well into his 90s, is being remembered for his faithful and energetic ministry.