The 2016 pause button on the sexuality debate in The United Methodist Church is about to be released. And churchgoers are showing up in droves to learn what is coming in February.

The special called 2019 General Conference is looming — set for Feb. 23-26 in St. Louis. The 864 global delegates will be tasked with addressing the church’s decades-long, split-threatening impasse over homosexuality.

As decision time draws near, many United Methodist conferences in the United States, Africa, Philippines and Europe are holding meetings that are part tutorial, part focus group. People are coming with questions and opinions about the legislative options and processes — and with hopes their General Conference delegates and bishops can give them a glimpse of the denomination’s future.

Crowds have been, by church-meeting standards, boffo.

“The first three (sessions) we had, our attendance actually exceeded our registration,” said Bishop Bruce R. Ough, who is helping to lead 15 gatherings across the Dakotas and Minnesota conference. 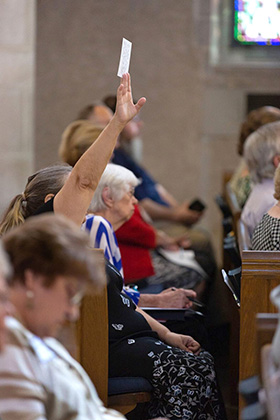 In Montgomery, Alabama, folks packed the sanctuary at First United Methodist Church on Sept. 16 for one of eight town hall Q&A sessions being held in the Alabama-West Florida Conference.

Bishop David Graves answered questions ranging from church pension concerns to defiance of the Book of Discipline. He emphasized that delegates elected by the conference will be making the final decision and encouraged people to communicate their views to those delegates.

“This thing about the denomination and human sexuality — it’s a mess,” said Graves, talking to the gathering. “Friends, we have to get back to living out the truth wrapped in grace because we have to help the world not go to hell.”

Eleanor Lucas, a member of First United Methodist Church, said she had been confused about the three proposals and wanted some clarity before she spoke to the delegates. She felt she had that after the two-hour meeting.

And she appreciated Graves talking about measuring everything with grace.

“Even if we don’t get our way, exercise grace throughout so we don’t start throwing things at each other,” she said, smiling.

Across the connection, many of the gatherings have offered video presentations and handout sheets on the One Church, Traditional Plan and Connectional Conference plans. These three main legislative options emerged from the Commission on a Way Forward’s work with the Council of Bishops and are scheduled to be on the agenda as legislation in St. Louis.

In the Holston Conference, which includes east Tennessee, southwest Virginia and northern Georgia, delegates speaking at listening sessions emphasized that “Bible-believing, Jesus-loving” United Methodists can and do interpret Scripture differently.

They also encouraged local churches to have their own candid discussions about the possible outcomes and aftermath of the special General Conference. 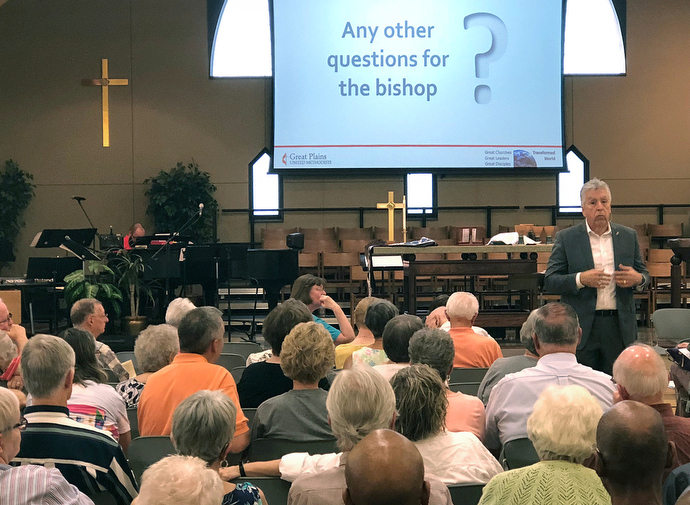 “Churches that talk about this ahead of time are much more prepared for what happens than those who wait,” said the Rev. Will Cantrell.

“No matter what we do at General Conference, we’re going to lose people,” Goddard said. “What we’re trying to figure out is if there is a way, given our differences, that we can live together.”

In the Great Plains Conference — Kansas and Nebraska — more than 800 people came out for meetings with Bishop Ruben Saenz Jr.

Brett Horton, a member at Olathe Grace, appreciated the conversations.

“It gave me hope that we would continue to have dialogue,” Horton said.

Even with the Minnesota Vikings playing a Thursday night TV game, about 120 people gathered Sept. 27 at Normandale Hylands United Methodist Church in Bloomington, Minnesota, near Minneapolis. That was nearly triple the number who signed up in advance. The crowd included many pastors as well as lay leaders of local churches. 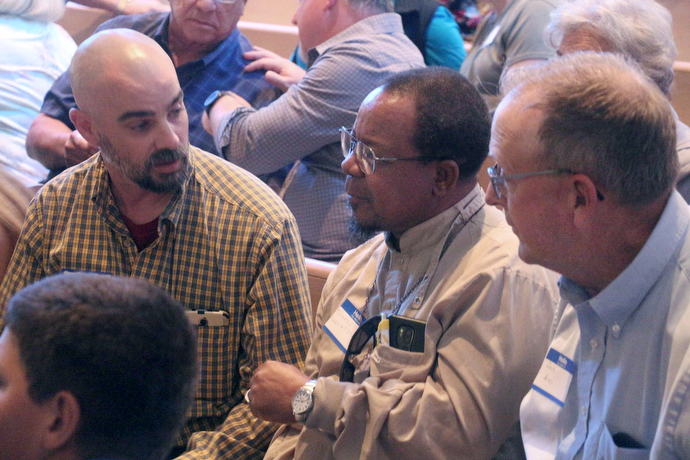 Participants in a Great Plains Conference town hall meeting engage in small group discussion. The meeting at First United Methodist Church in Garden City, Kansas, was just one of several town hall meetings called by Bishop Ruben Saenz Jr., for discussion of the Commission on a Way Forward report. Photo by David Burke.

They sang the hymn “Sweet, Sweet Spirit,” and heard a heard a closing homily from Ough. But most of the evening went to detailed presentations of the plans by Dave Nuckols, a member of the Commission on a Way Forward, and to small group discussion.

The Rev. Gerry Vuchetich, recently retired, came “to see where the future of The United Methodist Church is going.”

He’s a self-described conservative evangelical, and favors the Traditional Plan, which would require stricter enforcement of church law restrictions against ordination of gay clergy and same-sex unions.

“I’m just concerned that The United Methodist Church follow Jesus and not the culture,” Vuchetich said.

“I’m gay, so this is impactful directly to me,” she said of the church’s homosexuality debate.

Dallessandro favors the One Church Plan, which would give U.S. pastors, churches and conferences leeway in deciding such issues as gay ordination and whether to officiate and host same-sex weddings.

She acknowledged that some progressive friends see that as too much of a compromise, since it does not eliminate the restrictions altogether. But her awareness for United Methodist mission work around the globe shaped her support for One Church. 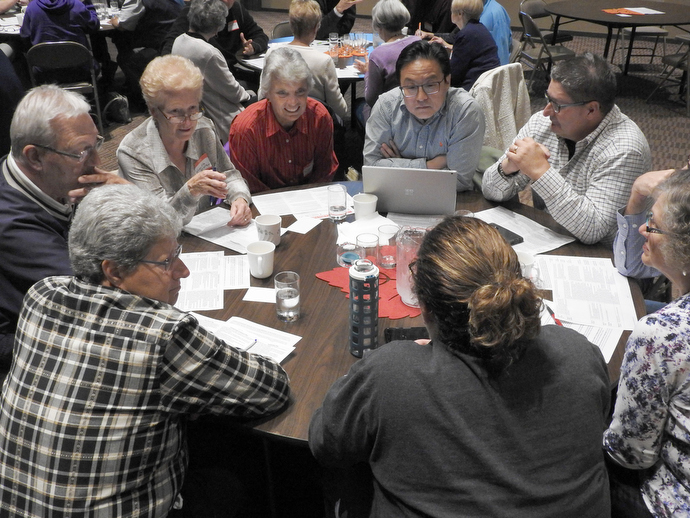 Plans for reshaping The United Methodist Church generate considerable discussion during a well-attended meeting at Normandale Hylands United Methodist Church, in Bloomington, Minnesota. Dakotas-Minnesota Area Bishop Bruce R. Ough gave a homily at the gathering, and also answered questions about the three plans due to be considered by a special General Conference in February. Photo by Sam Hodges, UMNS.

“I felt pride in knowing that mission is there serving people in that community,” Dallessandro said. “I don’t want to see those things get harmed by doctrine or dogma.”

Listening sessions are also happening in the central conferences in Africa, Asia and Europe.

Retired Filipino Bishop Daniel Arichea Jr. led one in Manila on Sept. 27, with most participants expressing support for the One Church Plan.

The national United Methodist Women Society of Christian Service held its own study session on the three plans at the United Methodist Church at Decker Homes in the Philippines on Sept. 29.

Manila Area Bishop Ciriaco Q. Francisco led discussion of the three plans, and the Rev. Helen Mañalac-Cunanan shared information about the Commission on a Way Forward, on which she served. At this meeting, some favored One Church and others the Traditional Plan.

“People are really anxious about what will happen in February and they want to know the specifics of each plan,” she said.

She added she knows a lot is being said about how Africans will vote. 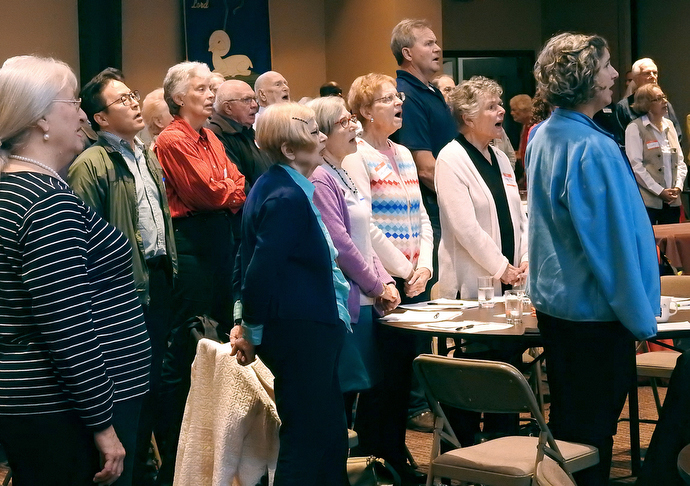 A Minnesota Conference meeting about the Commission on a Way Forward report included time for hymn singing. Bishop Bruce R. Ough led the session at Normandale Hylands United Methodist Church, one of 15 he scheduled for the Minnesota and Dakotas conferences. Photo by Sam Hodges UMNS.

“It is disrespectful to imply they (Africans) will do what their bishops tells them or what someone else says they should do. Bishops don’t vote, delegates vote. … Our hope is to see the church united,” she said.

Many churches are having their own meetings, and at Normandale Hylands United Methodist Church a “Wesley Wall” has been devoted to sharing information and posing questions about the Way Forward process and special General Conference.

Though the listening sessions have mainly been about imparting information, General Conference delegates are also seeking input from rank-and-file United Methodists before heading to what’s sure to be a legislative scramble in St. Louis.

“I want to hear the responses, opinions and thoughts, from the rural areas to the urban areas,” said the Rev. Woojjae Im, a Minnesota Conference delegate.

The meetings have been serious, given the high stakes. But humor has found its way into many of them, including the Sept. 25 session at First United Methodist Church in Duluth, Minnesota.

There, Ough and other leaders asked participants to complete the sentence “I hope the United Methodist Church will find a way forward by ____.”

Churches in Maine and Texas and the largest church in the Illinois Great Rivers Conference are in the process of severing ties with The United Methodist Church.
General Church