The visitor guide has told the story of the fall of the Berlin Wall hundreds of times. On this day, it is to a group that includes U.S. visitors in town for the spring meeting of the United Methodist Board of Church and Society.

The white-haired woman stands exactly where the sanctuary of the Church of Reconciliation once stood. The church was demolished in 1985. It’s easy to see that the events of that time still move her deeply. She conveys to the group how this place of division and destruction is today a memorial to peace and reconciliation.

After World War II, Germany was divided among the victorious Allied powers in a way that split the city of Berlin into East Berlin and West Berlin. With the construction of the Berlin Wall in 1961, that division was painfully visible.

The Church of Reconciliation was located on the Soviet side in the eastern part of Berlin, while the area in front of the church and most of the congregation were in the French sector in West Berlin. Sitting in the middle of the so-called “death strip” a few yards from the wall, the church was inaccessible to citizens from both sides.

For more than 20 years, the church gained notoriety, becoming a symbol of the wall’s isolation. “The church stood in the way,” literally and figuratively, Schmidt said.

The much-photographed church with its towering steeple was a thorn in the side of East Berlin politicians and Soviet troops. After negotiations and damages for the Evangelical Church, The Church of Reconciliation was destroyed in 1985.

No one knew at the time that four years later the wall would fall and the former downtown wound would become a memorial of peace and reconciliation.

Back on the tour, Schmidt overcomes the trembling of her voice and diverts the eyes of the international United Methodist group to two peculiarities of the sober reconciliation chapel. 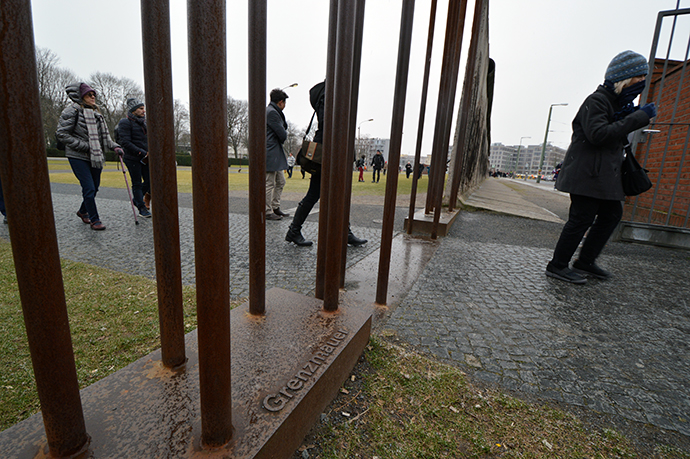 Visitors explore the Berlin Wall Memorial. Metal bars indicate where the boundary of the wall was, with the area to the left being the former East Berlin and to the right, the former West Berlin. Photo by Klaus U. Ruof, UMNS.

The walls were erected with the help of volunteers from 14 European countries. These young people from formerly hostile nations built a memorial of reconciliation together. The clay contains crushed, small-scale stones from the former Church of Reconciliation.

“The stones as a sign of destruction and the clay as a sign of connection urge reconciliation and make this space a place of peace and vision,” Schmidt said.

A few steps further, she points to the altarpiece, which was found almost undamaged beneath the pile of rubble and now sits in the apse of the newly built Chapel of Reconciliation.

“Jesus has no face and some of the disciples are headless,” she said, visibly moved, as she concludes the tour. “This Jesus is very close to me.”

Only now do the visitors recognize the silent message of this beautiful work of art.

Later, at dinner, a board member asks, “Why does this place of reconciliation affect us so much, while elsewhere we force division, advocate separation and exclude people from life?”

The Rev. Susan Henry-Crowe, Church and Society’s top executive, said this trip will help board members to better understand The United Methodist Church as a global church. She said she hopes the trip helps them finding appropriate answers to address challenges of peace and justice. 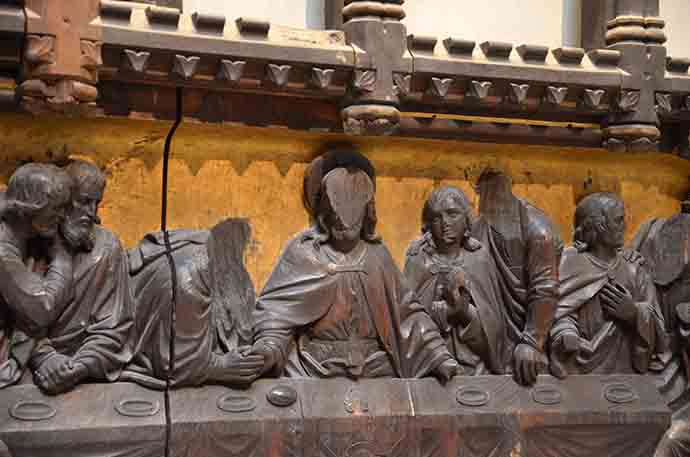 The altarpiece from the Church of Reconciliation was found barely damaged beneath the pile of rubble. “Jesus has no face and some of the disciples are headless,” said tour guide Christiane Schmidt of the piece, which now sits in the apse of the newly built Chapel of Reconciliation in Berlin. Photo by Klaus U. Ruof, UMNS.

“As Methodists, we can make a big difference in the world, especially when we cast our eyes beyond ourselves,” she said.

That message resonated with Tamara Brown, a Houston psychologist and member of the Kentucky Conference who made the trip.

She said she learned from her German friends that many of the Social Principles that are so important to the church pertain to U.S. governmental processes. In other countries, it is often necessary to find a formulation that applies as concretely.

“We are not a U.S. church but a worldwide church,” said Brown. “I learned a lot, because I had to get out of my context and see our work from the perspective of people in another context. What we do, what we say, needs to reflect our reality as a global church.”

She was curious to see how things are going in the revision of the Social Principles and in the proposal for the global Book of Discipline. “We urgently need that,” she said.

Randall Miller said that global networking represents a great opportunity for The United Methodist Church. A lecturer in Christian Ethics at the Pacific School of Religion in Oakland, California, he emphasized that “authentically listening” is the prerequisite.

“Even if you disagree with somebody, it is time to really listen to what they have to tell you first, without kind of thinking of a response,” he said.

As a member of the board, he relished the opportunity “to hear other people, to learn what they have to say and to see very different contexts they are living in. … The power of authentically listening engages people.”

Bill Stikes, a high school history teacher from Georgia, said, “What happens when we deny the humanity to people was on display at the Berlin Wall.”

“If we tell each other our different stories, we'll better understand why we have different points of view,” he said.

Northern Illinois Bishop Sally Dyck, president of the Board of Church and Society, said she was grateful for the stories told about the division of Germany and the fall of the Berlin Wall.

“Mutually telling stories changes us,” she said. “Many of the board members will return from the trip to Berlin with a different view than they went.”

Ruof is director of communications for The United Methodist Church in Germany. Media contact: Vicki Brown at 615-742-5470 or [email protected]. To read more United Methodist news, subscribe to the free Daily or Weekly Digests.

United Methodist financial leaders voted on agencies’ 2021 budgets at the same time they looked at the costs of a potential church split and a proposal to reduce bishops.
Evangelism

Györgyi Vályi found that even as the Covid-19 pandemic limited church to internet and telephone, Hope Church members grew closer together and that gave her new confidence in her own ministry leading the church.