The Texas sun beat down, but Silvina Epperson smiled big as she climbed the staircase leading to the First United Methodist Church of Sulphur Springs.

For three months, First United Methodist Church of Sulphur Springs joined most of the rest of the denomination in a coronavirus quarantine. That meant online gatherings only.

But given the green light by the North Texas Conference, the church had a carefully planned “Re-gathering Sunday” on June 14, with three worship services drawing just under half the usual attendance of 325.

Hugs and handshakes were out. So were hymnals and offering plates. Blue ribbon blocked off every other pew.

But the faithful who came said it still felt like church — and a family reunion.

The Rev. Ed Lantz, senior pastor at First United Methodist Church of Sulphur Springs, preaches during a June 14 service. The church resumed in-person worship that day after about three months of online-only services, due to the COVID-19 outbreak. Photo by Sam Hodges, UM News.

“At least we’re together again. That’s the main thing,” said Lee Levine, a fifth-generation member and head of the greeting team.

The church in Sulphur Springs, about 70 miles east of Dallas, is no denominational outlier. Though the coronavirus pandemic continues, with cases increasing in Texas and about 20 other states, the pace of United Methodist church re-openings is clearly picking up.

For example, in the Butler District of the Western Pennsylvania Conference, about a third of the 78 churches are meeting again indoors. Another third are having outdoor services with people staying in their cars or standing beside them while maintaining social distancing, said the Rev. Eric Park, superintendent.

The South Carolina Conference gave churches permission to resume in-person worship beginning last Sunday. The Rev. Jim Arant, interim director of connectional ministries, said he hasn’t gotten numbers on how many did, but he and other conference officials were estimating about two-thirds would take the big step.

Pre-pandemic average attendance for the four services was 2,200, and the church drew about 600 on Sunday. The Rev. Jeff Kersey, senior pastor, said an increase in cases in South Carolina likely was a factor, as was not yet resuming children’s programs.

“In some ways a smaller crowd was better, so we could make sure we’re doing everything correctly,” he said.

The reopening trend among United Methodist churches has extended to Europe, the Philippines and Africa.

“We held two services which were attended by 25 people and ensured everyone had a mask and had their hands and feet sanitized as they entered the sanctuary,” said the Rev. Pathias Hlahla.

One of the more distinctive stories has been in the Oklahoma Indian Missionary Conference, where some churches are meeting outside and avoiding the risk of touching songbooks by singing from memory tribal hymns in their native language.

“It reminds me of the olden days,” said Josephine Deere, a lay missioner who leads the conference’s Grant Chapel and Kaney Chapel churches. 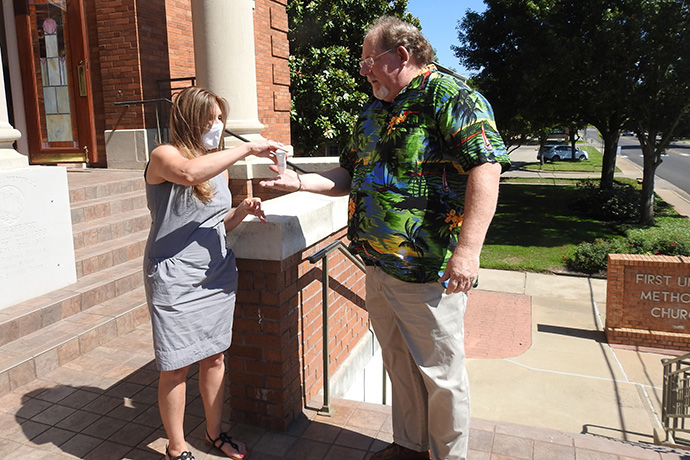 First United Methodist Church of Sulphur Spring had last met in person on March 8, as the gravity of the pandemic was becoming clear.

“The spiritual health of our church has remained strong. Having said that, there’s a deep, deep yearning to get back together,” the Rev. Ed Lantz, senior pastor, said last week.

Lantz turned to the church’s executive minister, the Rev. Jason Dietze, to lead the reopening charge. Dietze came up with a three- phrase plan, drawing on both state and North Texas Conference guidelines.

Cleaning has been a priority. The church’s janitorial staff went first, then came a professional cleaning crew, complete with fumigating equipment.

The church’s greeting team got special training, including on opening doors for all those arriving.

“The vision was that a person could come to the service and not touch anything but the place where they’re sitting,” Dietze said.

On Sunday, greeters also squirted hand sanitizer and offered masks. Wearing one was encouraged, not required, and most people went without.

The church offered a special 8 a.m. service for seniors and others at special risk, as well as the usual contemporary and traditional services.

Social distancing was enforced at all three, and because of that, Dietze and Lantz felt comfortable allowing congregational singing from words projected on a screen. A praise band played for the contemporary service, but the choir loft was empty. Offering baskets were strategically placed — not passed around.

Lantz’s sermon, from Ezra, touched on the racial unrest the U.S. is going through, but also addressed the challenges and opportunities presented by the pandemic.

“The God of the Bible is the God of new beginnings,” he said, insisting he felt renewed in his call to ministry in recent weeks.

Many annual conferences have equipped their churches with protocols and checklists to follow for resuming in-person worship and other gatherings. An ecumenical group, convened by United Methodists, recently released its own guide titled “Resuming Care-filled Worship and Sacramental Life During a Pandemic.”

The guide is the work of liturgical scholars, bishops, pastors, physicians and scientists, with input from the U.S. Centers for Disease Control.

“Everybody brought their expertise to the table,” said the Rev. Ed Phillips, associate professor of worship and liturgical theology at Candler School of Theology and an organizer of the effort.

First United Methodist of Sulphur Springs remains in phase one of its reopening. Dietze said phase two, scheduled for early July, will include resumption of Sunday school and the nursery, with social distancing still required.

“We’re going to have our coffee pots going, but we’re not going to have any food unless it’s single serving, pre-packaged,” Dietze said.

Packaged communion elements are on order as well.

Phase three for First United Methodist of Sulphur Springs has no projected date, but it’s seen as the new normal, including what Dietze thinks could be “everlasting changes” brought on by the pandemic.

Lantz and Dietze expected the church would be at or just under 50 percent of usual attendance, based on reports from other local churches that have resumed in-person worship. They’re hopeful for a gradual rebound, as people feel more comfortable getting out and as the nursery reopens and young families can come.

On Sunday, the first returners made up in enthusiasm what they lacked in numbers.

“I’m so excited,” said Kim Hewett, rubbing sanitizer into her hands and beaming as she stepped into the sanctuary. “It’s like Easter and Christmas combined.”

Ask the UMC: Why do we observe Passion/Palm Sunday?

Celebrating Passion/Palm Sunday is part of an ecumenical effort to refocus the whole season of Lent on making disciples of Jesus Christ for the transformation of the world.
Church Leadership

The daily life of United Methodist pastors is getting more and more stressful, with COVID-19, racial unrest, natural disasters and a likely denominational split over sexuality taking a toll.
General Conference

Organizers of The United Methodist Church’s top lawmaking assembly are looking at addressing the main problems that led them to postpone General Conference a third time.