Some churches in Africa have begun to reopen for worship services after several countries lifted bans on religious gatherings imposed to curb the spread of the coronavirus.

In Botswana on May 31, United Methodists attended church service for the first time after seven weeks of lockdown.

“It was an emotional moment for us to be able to congregate again,” said David Mandiyanike, connectional ministries chair for Gaberone United Methodist Church.

“The service was typified by repressed happiness; people would want to hug to express their joy, but we had to observe social distancing. Such is the new normal,” he said.

“With a total membership of over 300, sifting the mandatory 50 people to attend the service was complex and required an inspired balancing act,” Mandiyanike said.

The Gaberone service was attended by a cross section of selected church leaders. Those attending wore face masks and had their temperatures checked by members of the health committee. There also was a registration desk where members were encouraged to bring their own pens to avoid possibly spreading the coronavirus.

The Botswana government has allowed places of religious worship to conduct services twice a week, with a maximum of 50 people allowed to attend each service, said Mandiyanike, adding that services have been capped at two hours.

The Rev. Tafadzwa Mabambe said all members except children attended the church service in order to adhere to policies regulating numbers and social distancing.

“There was a spirit of revival. What was missing was handshaking and hugging since we were used to it before the pandemic,” Mabambe said.

Both churches in Botswana ensured compliance to government regulations and a register was compiled to make sure that numbers did not exceed 50.

The two Botswana churches became the first to reopen for worship in the Zimbabwe Episcopal Area as Zimbabwe remains under lockdown following a spike in cases of people with COVID-19. Zimbabwe has had 282 cases and four deaths to date.

In South Africa, President Cyril Ramaphosa announced churches, temples, synagogues and other places of worship could reopen after June 1.

“We understand the great impact that the closure of places of worship has had on members of the faith community, and that this has worsened the distress of communities who are unable to worship in congregation,” Ramaphosa said.

Despite the reopening of churches, the congregation of Hebron United Methodist Church in Cape Town, located in the Western Province, the epicenter of the COVID-19 pandemic in the country, will continue to worship online.

The Zimbabwean congregation with over 400 members does not have a church sanctuary.

“We rent a school hall for our worship services and schools have not yet reopened, so we cannot resume services,” said the Rev. Elisha Kabungaidze.

“The other worry is social distancing, as we have a large membership,” he said.

Another Zimbabwean congregation, Tshwane United Methodist Church in Pretoria, South Africa, led by the Rev. David Mucherera, has yet to reopen for worship services.

In a pastoral letter issued May 13, Bishop Samuel J. Quire Jr. of the Liberia Episcopal Area said United Methodists are still required to observe social distancing along with all health protocols.

“We agreed to keep all of our churches closed until this global lockdown as a result of the COVID-19 pandemic is relaxed,” the letter noted.

Though the government lifted its restrictions on religious gatherings on May 15, Quire said the church needed time to prepare for the “new normal.” The government urged religious institutions, especially churches and mosques, to host 25% of their total membership per gathering, which means churches can now decide on how many services to hold on Sunday.

“The ushers will not admit anyone once the number in the edifice reaches 90,” he said.

Wearing a mask while in the church will be a requirement for those wanting to attend. First United Methodist Church, which hosted more than 500 persons per service prior to COVID-19, will now host three services each Sunday.

“The third service will be hosted via social media to enable those who will not make it to the first two services to also attend service for the Sunday,” Williams said.

Carter Johnson, associate pastor of Doe Juah United Methodist Church, said his church will set its worshipping protocols once it has determined if all of its members will come to church at once.

“Since our membership is not that large, their presence on June 7, 2020, will inform the church leadership whether they should plan for two services or one per Sunday,” Johnson said.

The usual pew seating capacity of 18 people will be reduced to seven people per pew and pastoral staff along with the ushers will ensure that all health protocols are observed.

In Côte d'Ivoire, some United Methodist temples and places of worship reopened May 17 after closing for two months due to the COVID-19 pandemic.

The reopening followed the government's decision to ease restrictions, including allowing gatherings of less than 200 people. 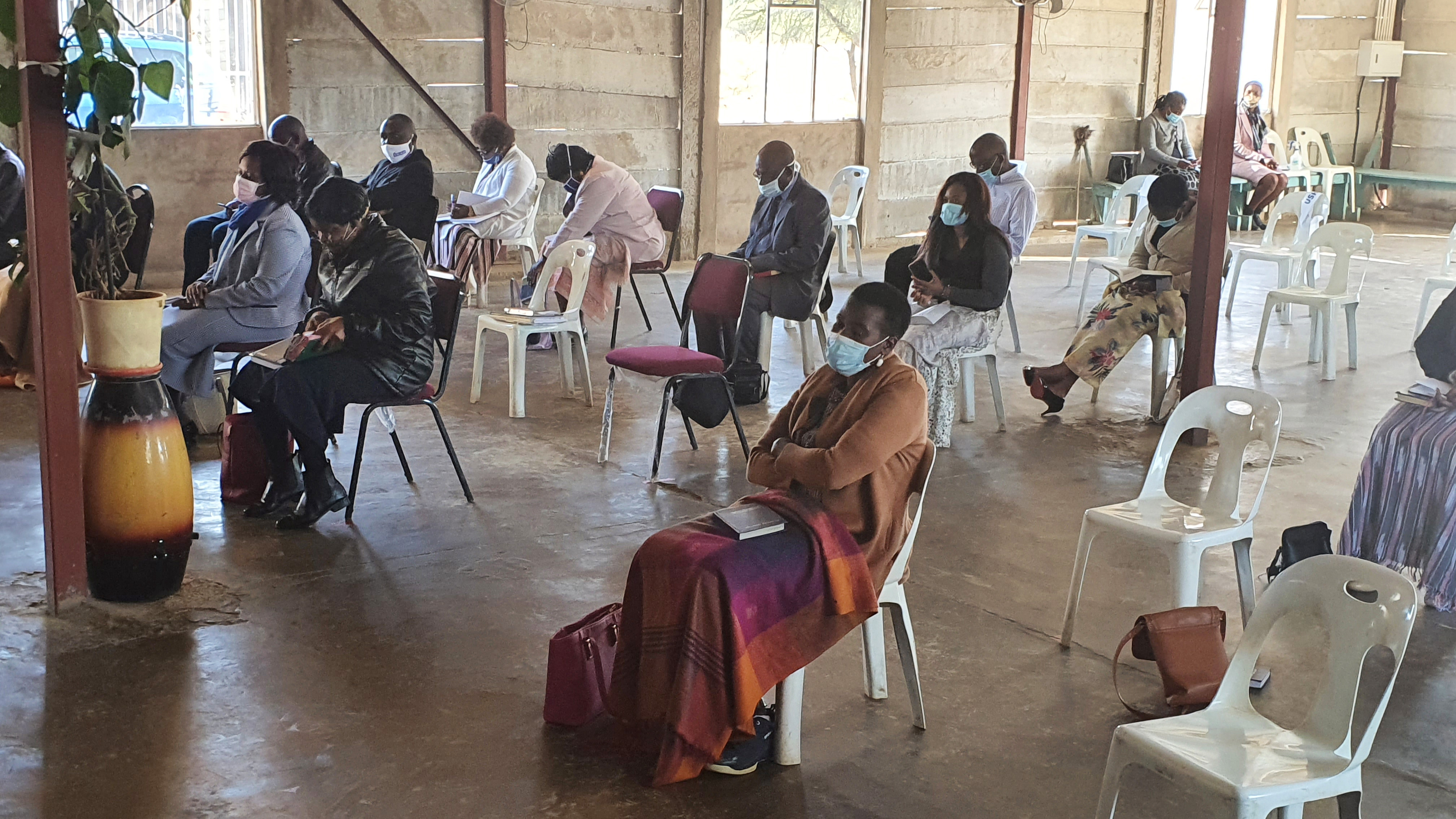 Religious leaders have been urged to enforce safety measures, which include the installation of hand-washing stations at every entrance, adhering to a social distance of one meter between each person and the wearing of masks for services.

Before the pandemic, Bethel-Quartier Eléphant United Methodist Church in the South-Abidjan District had an average of 700 people in attendance during its Sunday services from 9:30 to 11:30 a.m. The church now organizes three services on Sundays.

“In consultation with the church council and the leaders of the Methodist classes, we had to schedule the five Methodist classes accordingly to each service, so as not to exceed the required number of people. The main choir was divided into two groups to cover two services and keep the social distance. The musical band and the youth choir alternately lead the third worship service,” said Etienne Miehou, lay leader.

In Côte d'Ivoire, church members are grouped based on their geographical location into class meetings like those of early Methodism.

Cité de Paix-Anani United Methodist Church is much smaller. The average attendance is 200.

“We could fit everyone in one service. However, the community is obliged to split in two services to keep a social distance between members,” said lay leader George Adido.

Members in the Malawi Provisional Conference continue to worship, albeit in limited numbers, as the government did not ban church gatherings.

In Congo, representatives of religious denominations have asked authorities for the gradual reopening of churches, which have been closed for over two months following the state of health emergency established by Congolese President Félix Tshisekedi.

The Church of Christ in the Congo, a union that brings together 95 Protestant and evangelical Christian denominations including The United Methodist Church and the Catholic Church, discussed the issue May 19 with Congo’s head of government.

The plea came as seven of the 26 provinces in Congo reported COVID-19 cases. Currently, the country has more than 4,100 cases and 88 deaths, according to the latest data from Johns Hopkins University. With nearly 2,200 cases, Kinshasa, the capital, remains the epicenter of the pandemic.

Religious leaders called for the reopening of churches in the 19 provinces not affected by the disease, stressing the importance of prayer in the daily life of believers.

“We support the idea of resuming worship in provinces not affected by the coronavirus while observing the measures recommended by the ministry of health in the fight against the pandemic,” said Bishop Gabriel Yemba Unda of eastern Congo.

“The apostle Paul said to the Athenians in Acts 17:28 (in him we have life, movement and being ...). God will support us. There is no promise that we will not suffer, but that our suffering or our fear will never be beyond the reach of its principal benevolent,” he said.

The country's political authorities have not yet responded to the request from the religious denominations.

A ban on in-person worship remains in Sierra Leone, where there have been more than 1,000 confirmed COVID-19 cases and 49 deaths.

President Julius Maada Bio recently met with religious leaders to discuss resuming worship services. He asked the Inter-Religious Council — the umbrella group for Christians and Muslims, the two main religious sects in the country — to create a COVID-19-compliant formula for congregational worship. The group has not yet submitted its plan.

“Our president extended the state of emergency to June 30. We remain in quarantine,” said Gustavo.

Chikwanah is a communicator of the Zimbabwe East Conference. Communicators E Julu Swen in Liberia, Isaac Broune in Côte d'Ivoire, Phileas Jusu in Sierra Leone and Chadrack Tambwe Londe in Congo contributed to this report.