Nonagenarians are an integral part of our society. As I write this, news has broken about the deaths of legendary journalist Barbara Walters and Pope Benedict XVI at 93 and 95 years of age, respectively.

The Rev. Carlton R. “Sam” Young, thankfully still with us, is another nonagenarian, one with few peers among church musicians and theological educators. And now the 96-year-old Young, best known as editor of The United Methodist Hymnal, has gifted us with his autobiography — “I’ll Sing On,” a title taken from the final stanza of the hymn “What Wonderous Love Is This.” The subtitle, “My First 96 Years,” more than hints at the wit that underlies the book. 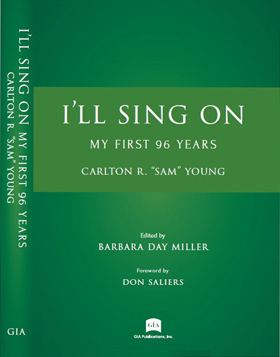 Few in church music bring Dr. Young’s array of gifts — as composer, professor, editor, conductor, performer, scholar. His new book is for anyone who wants insight into the church and its music since 1960.

Those who have used Young’s authoritative “Companion to The United Methodist Hymnal” (1993) will expect several qualities in his autobiography — exacting scholarship, honest evaluation of people and issues and delightful humor. All of these are brought to bear in “I’ll Sing On.”

The scores of composers, publishers, hymn writers, colleagues, scholars and former students mentioned in the book reveal a life full of relationships. Individuals are often given a paragraph or two, placing them and their gifts into the context of Young’s life.

Of particular note are those with whom he had decades of interaction, including hymn writers Shirley Erena Murray and Fred Kaan, composers and teachers Jane Marshall and Lloyd Pfautsch at Southern Methodist University, publisher George Shorney, Baptist composer and hymnologist William J. Reynolds, hymnology scholar Nicolas Temperley, and Bliss and Mildred Wiant, missionaries to China. Others with whom Young worked or collaborated at specific points receive equal appreciation, such as Abingdon editor and former student Gary Alan Smith and the late Page Thomas, director of the Wesley Collection at Bridwell Library (SMU).

More on the book

“I’ll Sing On: My First 96 Years,” the autobiography of the Rev. Carlton R. “Sam” Young, was edited by Barbara Day Miller, with a foreword by Don Saliers. The book is available for order from GIA Publications, Inc.

The care with which Young presents those who have touched his life indicates a sensitivity and appreciation for others that sets a tone of gratitude rather than self-congratulatory citation of accomplishments.

Young’s self-deprecating humor and wit punctuate the text throughout. An example: Early in his career, he learned that he was not in control of all aspects of a church choir, recounting a particular recalcitrant practice. “But the top pick of all the choir members’ shenanigans was they would not assemble for the stated 7:30 Wednesday evening rehearsal until they had listened to ‘The Lone Ranger,’ 7:30-7:45, on their car radios. This meant rehearsals with music in hand seldom started before 7:55.”

Sometimes he mixes wit with a modicum of sarcasm, such as in this observation: “It is axiomatic that forming worship spaces seldom results from local group expertise, but more likely from the hired opinions of architects of space and/or sound who are possessed by great ideas, have above average communication skills, and demonstrable egos. Paul Rudolph, architect, and Chick Holtkamp (1928-2018), organ builder, did not disappoint in any regard.”

The Rev. Carlton R. “Sam” Young composed the music and Shirley Erena Murray the text for the hymn “Star-Child.” Click here for one of the versions available on YouTube.

Another popular hymn tune of Young’s, paired with a lyric by Brian Wren, is “This Is the Day of New Beginnings.” Click here for a performance on YouTube.

Young’s music for the biblical benediction “The Lord Bless You and Keep You” also is available on YouTube. Click here.

As an editor, Young prepared groundbreaking publications such as “Songbook for Saints and Sinners” (1971), “The Genesis Songbook” (1973) and the visionary “Ecumenical Praise” (1977). The United Methodist Hymnal (1989) introduced innovations that many hymnal editors emulated in the following decades, especially in the balance between its Methodist heritage and the ecumenical “hymnic explosion” of newer 1960s, 1970s and 1980s repertoire.

Additional innovations included the incorporation of sacramental services and other liturgies and, arguably, the broadest representation of congregational song from the world church of any North American hymnal.

A topic that permeates this autobiography is Young’s advocacy for African Americans and Black music. Living in Atlanta, Dallas and Nashville during and in the wake of the civil rights movement left a profound imprint. He recounts taking mixed-race Seminary Singers on tour to congregations in the South, making it clear that music-making for Young was both an artistic and ethical endeavor.

Young’s love of jazz, reflected in compositions and performances as a bass player and pianist in the years following World War II, may have set the stage for his appreciation of cultural and stylistic diversity. Duke Ellington’s “Come Sunday,” first appearing in “Ecumenical Praise” and then The United Methodist Hymnal, became a favorite in many United Methodist congregations and gatherings. The liberal inclusion of African American spirituals and the hymns of Black Methodist pastor Charles Tindley in The United Methodist Hymnal and other publications were an indication of Young’s affinity and advocacy for this music and the people it represented.

The author skillfully uses footnotes throughout the book to provide additional background on specific issues and persons without bogging down the readable flow of the narrative. For the reader deeply interested in church music, the footnotes are essential. A few of my favorites were his discussion of the origins of the term “Minister of Music” (n.2, p. 54), the rehearsal techniques of Westminster Choir College luminary John Finley Williamson (n. 14, p. 60), Atlanta Symphony conductor Robert Shaw (n. 19, p. 66) and the significance of the gospel song genre (n. 13, p. 85).

UM News’ Sam Hodges interviewed the Rev. Carlton R. “Sam” Young in 2020 as he released a new collection of sheet music. Young said he hoped “Today I Live: Hymns and Songs of Remembrance and Hope” would provide new, fitting music for memorial services caused or delayed by COVID-19.

Though he deals with serious topics, Young does not take himself too seriously. Scattered throughout are references to positions or events for which he was “totally unqualified in music and education” and “eminently unqualified.” During his first position in Nashville, he notes, “Given the prospect of editing and publishing a revised Methodist hymnal without prior training or experience in either, especially the British and American Wesleyan hymnic traditions, one of my first acts was to assemble for my daily study and reflection a modest library on hymnology and worship.”

A thread throughout the book is Young’s partnership with Marjorie Lindner Young, his wife. Her care for their four children enabled him to travel extensively, including internationally, for his work in church music. This book is also a chronicle of family events and difficulties. Sam Young is especially vulnerable in his discussion of son Robert’s schizophrenia.

These days, Sam Young’s struggle with multiple myeloma, Marj’s hip replacements and her early-stage Alzheimer’s disease have resulted in lifestyle choices. They are blessed to receive support from their children. Robert’s residence in their four-story house — known as The Owl’s Nest, and now with an elevator — makes it possible for the couple to live independently.

This review cannot do justice to the nuance and rich resources in “I’ll Sing On.” Young enhances the narrative and even the extensive index with photographs, musical scores and other extras.

Suffice it to say that Dr. Young is always looking ahead. The conclusion offers reflections on the field of church music, several recommendations for the future of The Hymn Society in the United States and Canada and special thanks to more than 50 people.

Young’s autobiography offers an essential perspective on developments in Protestant mainline church music within an ecumenical context. This volume includes wisdom and wit while tracing the life of one of the most influential church musicians of our time.

Rep. Delia Ramírez Hernández (D-Ill.) was sworn into the 118th U.S. Congress on Jan. 7. She grew up attending Humboldt Park United Methodist Church in Chicago and has been a leader in the denomination.
Church History