In the early 1950s, Jane Marshall was a young homemaker and Methodist church choir member, albeit one with an unusually strong music background.

She decided to write an anthem.

The grand slam result was “My Eternal King,” published in 1954 by Carl Fischer Music. It became one of that venerable sheet music company’s all-time bestselling anthems and remains popular with choirs across denominations.

Marshall would go on to write more than 200 anthems, hymns and other sacred music works.

A revered figure among fellow United Methodist musicians, as well as the broader church music world, Marshall died May 29 in Dallas at age 94.

“I rank her as the most sensitive and text-oriented hymn tune composer of the late 20th century. She was that good,” said the Rev. Carlton Young, editor of The United Methodist Hymnal.

Marshall also influenced two generations of music ministers through her teaching at Southern Methodist University’s Perkins School of Theology, including its Church Music Summer School, where she was a fixture from 1975 to 2010. 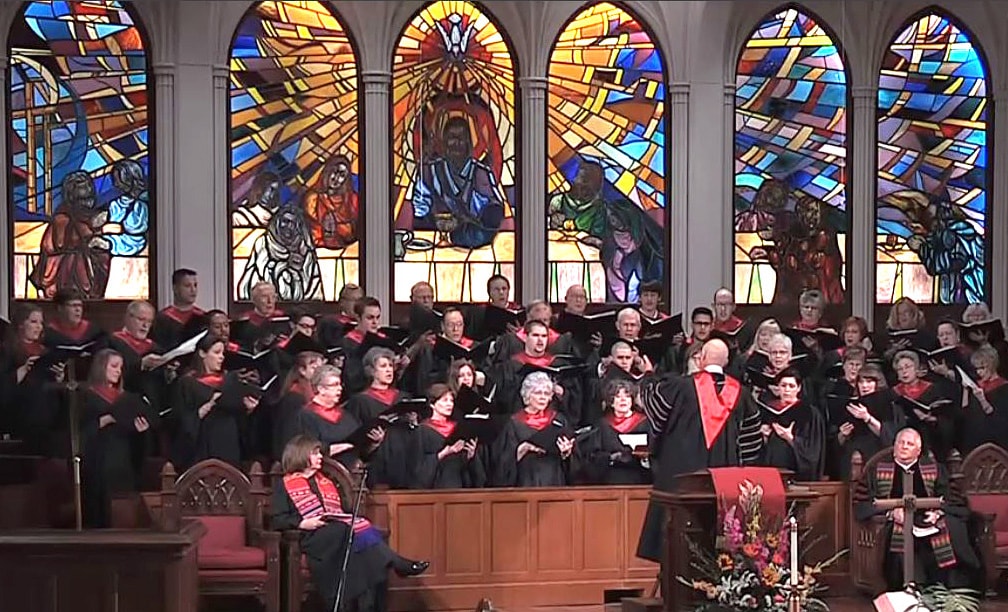 Video image courtesy of Polk Street United Methodist Church
Jane Marshall’s 1952 anthem “My Eternal King” continues to be a favorite of church choirs, and some have put their performances on Youtube. Click here for a rendition by Polk Street United Methodist Church of Amarillo, Texas.
Sid Davis, longtime director of music and fine arts at St. Luke’s United Methodist Church in Houston, said Marshall wrote the first solo he sang as a boy. She later taught him in the Perkins summer program, recommended him for church jobs and became a close friend — one whose “Come in this house!” greeting he remembers with emotion.

“There’s no way for me to even be able to catalog all the ways I owe her,” Davis said.

Marshall was born Jane Anne Manton in Dallas in 1924 and grew up to be an accomplished pianist and organist. She began to compose music as a teenager, and in 1945 earned a music degree from SMU.

She married Elbert Marshall, an engineer who had been her high school classmate, the next year. She is survived by him and their three children.

As a young mother, singing alto in Dallas’ Highland Park Methodist Church choir, Marshall decided to compose music for a text she loved — the Rev. Edward Caswall’s English translation of an anonymous Latin poem from the 17th century.

Eventually titled “My Eternal King,” the stirring anthem had its debut at Highland Park Methodist Church in 1952, with Marshall conducting. Two years later it was published, and gradually became a staple of church choirs, giving the composer a measure of fame and a succession of welcome royalty checks.

Marshall would write other acclaimed and popular works, such as “Awake, My Heart,” which won the American Guild of Organists’ 1957 anthem prize, “He Comes to Us,” a setting of words by Albert Schweitzer, and “Fanfare for Easter.”

Her hymn “What Gift Can We Bring” — written for the anniversary of Northaven United Methodist Church, the Dallas church where she was a longtime member — is one of her several compositions in The United Methodist Hymnal. She’s represented in other denominational hymnals, and her music for children found broad use. 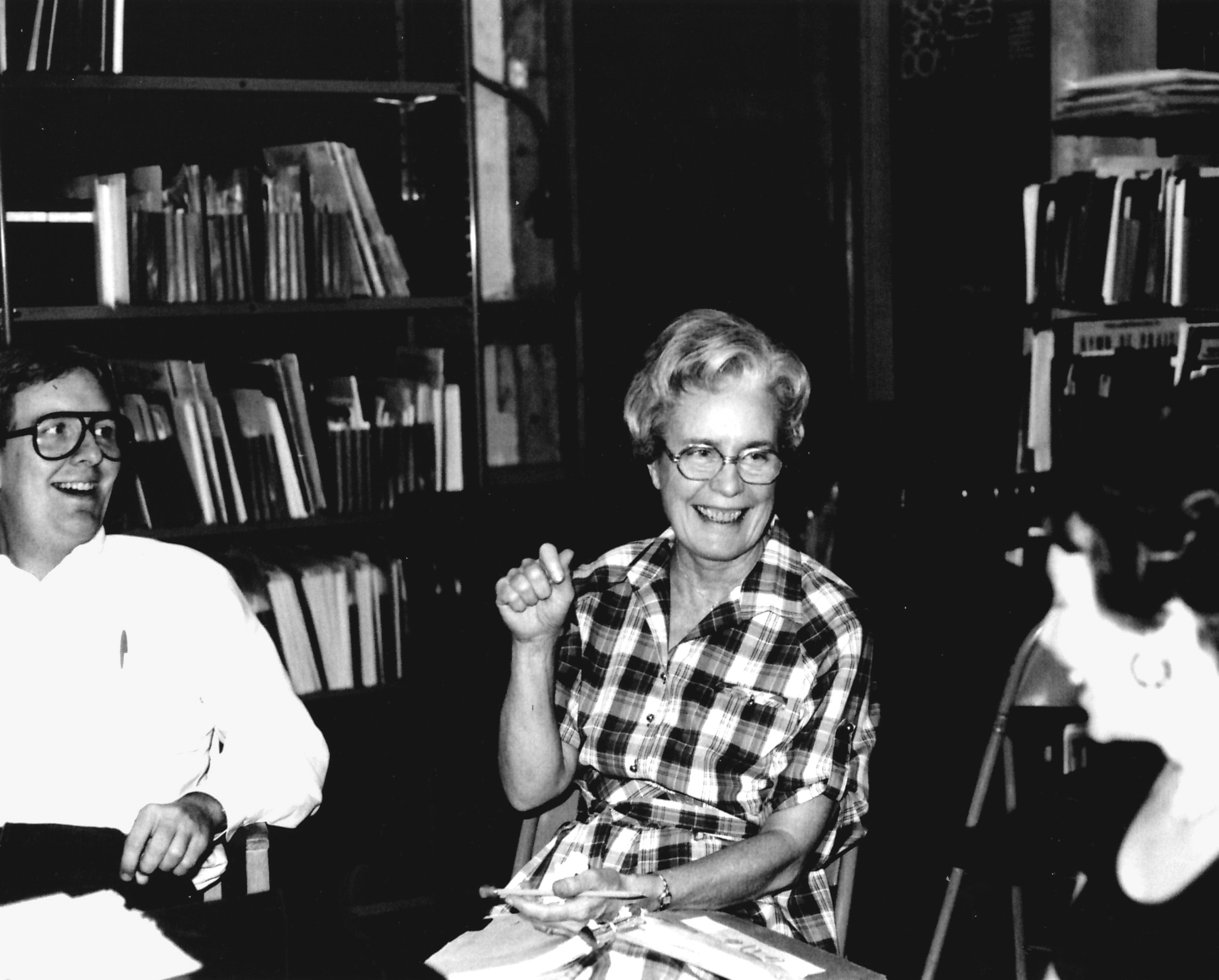 Jane Marshall was best known as a composer, but she influenced many music ministers and others through her teaching at Perkins School of Theology and workshops at churches. Photo courtesy Perkins School of Theology's Bridwell Library.
Though Marshall would sometimes write words and music, she collaborated often, composing tunes to go with others’ texts. The noted hymn writer Shirley Elena Murray of New Zealand was one partner. The Rev. John Thornburg, a United Methodist elder in Dallas, wrote scores of hymns and solos with Marshall over 15 years.

He said she would start by commending him on something specific in his text. Then she would point out a weaker line.

“She’d say `John, I think you need to take another swing at that one,’” he said.

Thornburg observed her as a teacher of conducting, working patiently with a range of skill levels. All got the Marshall treatment.


Marshall’s sermons and essays on music and Christian faith are collected in the book “Grace, Noted.” For The United Methodist Hymnal, published in 1989, she served on a special subcommittee addressing language and theology of hymn texts.

“She was a voice of moderation, mediation and acceptance,” Young said. 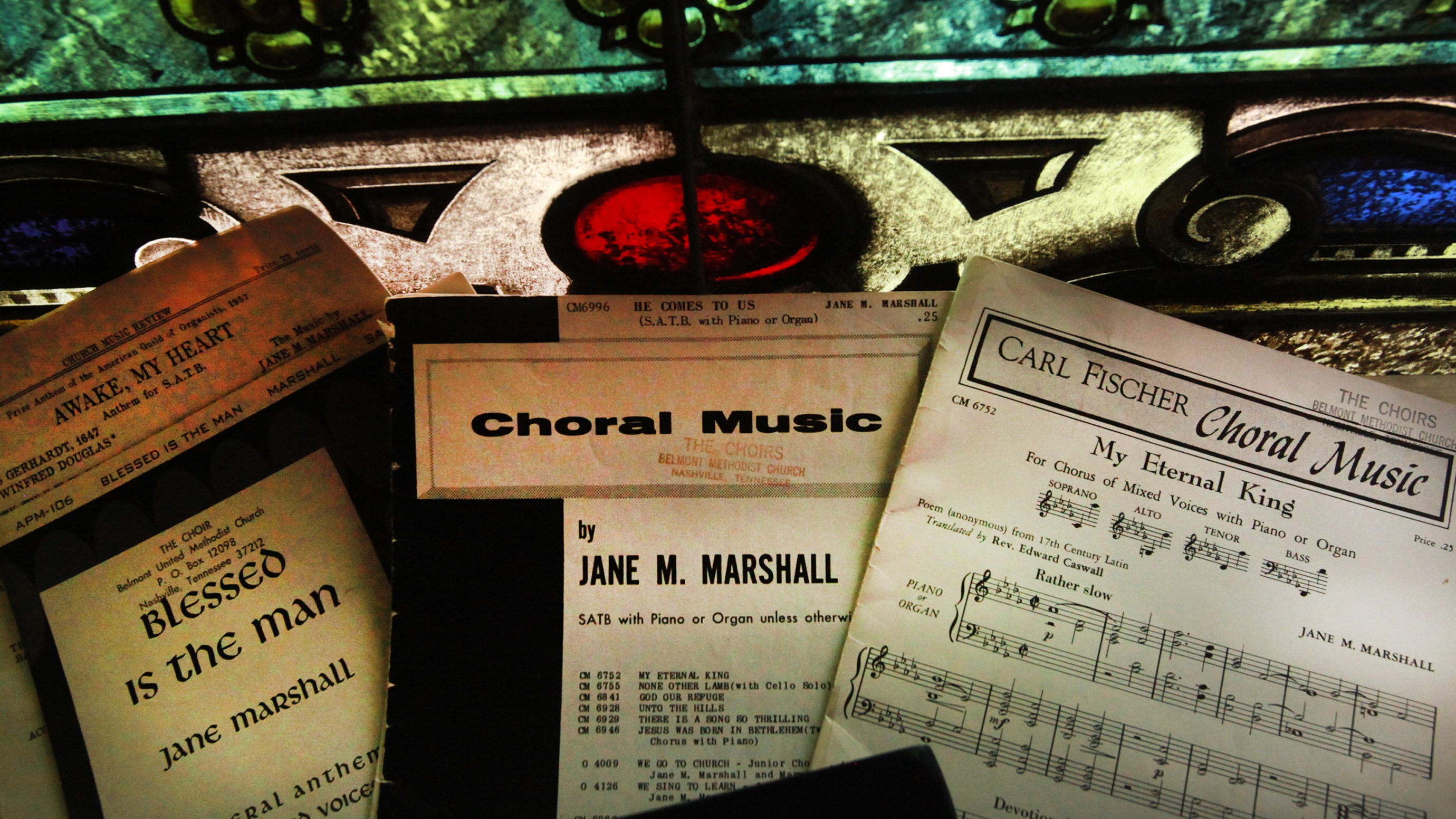 Jane Marshall's music continues to be sung by United Methodist choirs and others. Photo illustration by Kathleen Barry, UM News.

After her initial success as a composer, Marshall returned to SMU to get a master of music degree in choral conducting and composition, which enabled her to teach at the college level. Young said she’s properly seen as part of an influential “Dallas School” of composers mentored by the late Lloyd Pfautsch.
Even there she stood out.

“Something about her craftsmanship allowed her to write with such integrity and sensitivity. …  She was just very gifted,” Young said.
Among those recalling Marshall with gratitude is Virginia Dupuy, who teaches voice at SMU’s Meadows School of the Arts. Dupuy attended Northaven with Marshall, and commissioned hymns by her.

“Her words and music have just been very profound in my spiritual journey, both in celebration and grief, and really in the everyday of life,” she said.

Marshall, in an essay titled “The Passionate Church Musician,” directly addressed the place of music in the Christian life.

“Much is said, and rightly so, about necessary faith in God — a given we all accept,” she wrote. “What can be added is that music itself, when it is the real thing and not a cheap imitation, is worth having faith in, too. It is no exaggeration to say that music, a large mystery within the larger mystery of the Deity itself, is always there to heal and inspire when everything else on earth falls short.”