Twenty years ago, a landmark document on women’s rights emerged from a U.N. conference in China.

In March, United Methodists will be among those assessing the progress of the Beijing Declaration and Platform for Action during the 59th session of the U.N. Commission on the Status of Women.

The United Methodist Board of Church and Society will co-sponsor a March 17 workshop at the church center on ways to achieve gender equality and empower women.

The Beijing Declaration and Platform for Action remains “one of the most important outcome documents for women’s rights and women’s issues,” said Tatiana Dwyer, UMW executive for global justice issues. “It identified 12 critical areas of concern.”

Participants in the commission session will review the progress made in those areas and flag emergent issues, such as global migration. “We need to renew commitments to Beijing,” Dwyer added. 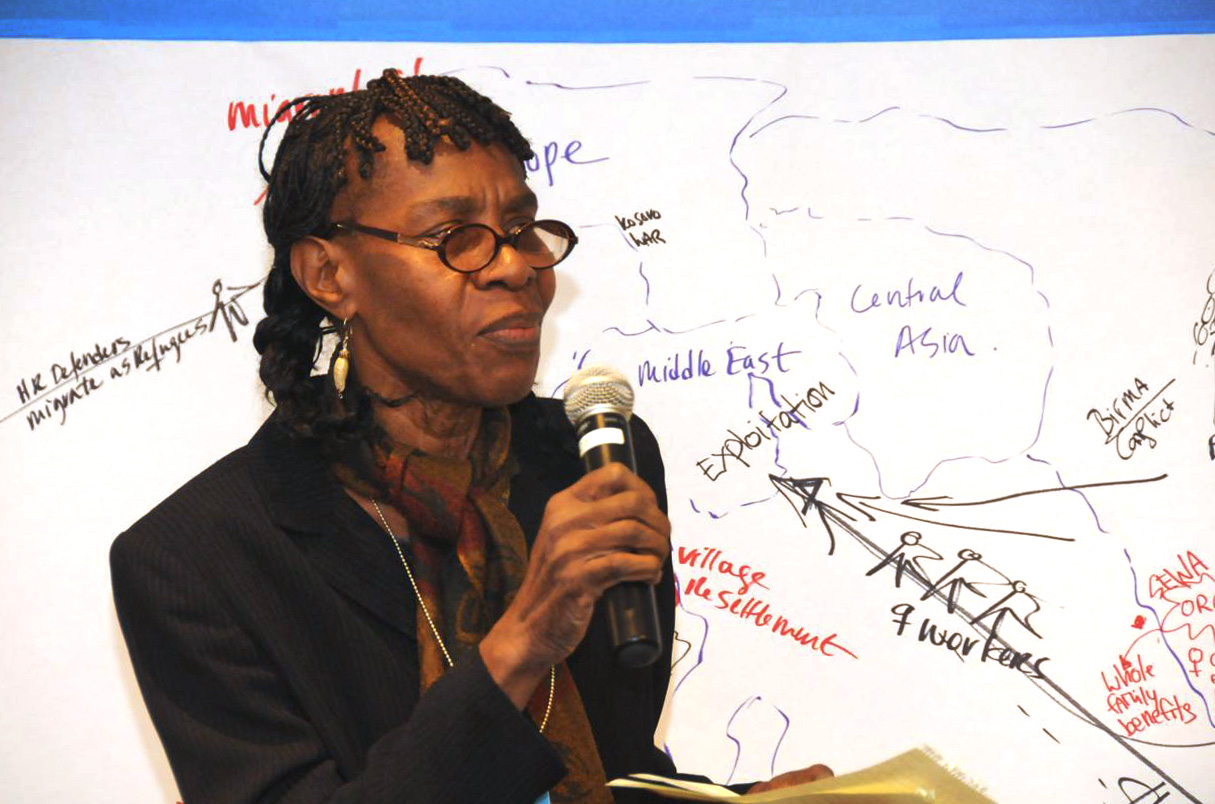 Nelcia Hazell, a community organizer with the Caribbean Conference of Churches, participates in a discussion on migration during the 2012 U.N. Commission on the Status of Women meeting. Photo by John C. Goodwin, UMNS

UMW has submitted its own statement and is a signer of the joint statement by Ecumenical Women to the U.N. commission, which points to four areas where progress remains to be seen: violence and discrimination against women; poverty, inequalities and climate change; education and training of women and girls, and full access to reproductive health and informed decision-making for women.

One of primary goals for UMW at the event, explained Carol Barton, UMW executive for community action, is to invite a delegation “who can bring their own voices to an international arena…and to be energized to take that back to their contexts.”

The denomination’s women’s organization sponsors grassroots attendance nearly every year for the Commission on the Status of Women meetings. In 2012, for example, Nelcia Hazell, a community organizer with the Caribbean Conference of Churches, was invited as part of a nine-member UMW delegation. It was not her first visit for commission week, having been involved in preparatory work for the Beijing conference and the reviews held five, 10 and 15 years afterward.

Hazell, a Methodist from the island of St. Vincent, said those experiences allowed her to interpret back home the discussions of the United Nations and its member states on a wide range of social issues. Her involvement has "provided me with a lot of information that I would not have had otherwise," she noted at the time.

In September 1995, as 17,000 participants representing 189 governments debated their way to the Beijing Declaration and Platform for Action, United Methodists were among the 30,000 networking, lobbying and attending a parallel forum nearby. The plan was nonbinding but gave women’s groups the backing to hold their governments accountable.

The timing of the U.N.’s Fourth Conference on Women, was significant because it occurred right after the collapse of the Cold War, noted Barton, who was in Beijing.

“It (the ‘90s) was a decade in which there were a lot of U.N. conferences taking place — on human rights, on climate, on women, on social development  — that were able to build consensus globally on some very lofty goals on what the world should look like,” she recalled.

Today, she said, the domination of an unrestrained free-market economic model and the shift to a national security, anti-terrorism framework, rather than a focus on economic justice and human rights, has worked to undermine those goals.

And while the Beijing declaration significantly “established a normative standard in terms of women’s rights that most nations signed on to,” equal access with men is not enough at a time plagued by regional conflicts and economic uncertainty, Barton declared.

The new goal, she said, is not merely equality, but how “men and women together can transform the world into a more just place where life is better for everyone.”