Both the challenges and the solutions to problems faced by rural women around the globe seem to boil down to a single word: "access."

Or, as the Women's Division, United Methodist Board of Global Ministries, explained in a recent statement to the 56th session of the U.N. Commission on the Status of Women: "Rural women in all regions cite lack of access to critical resources including health, education, transportation, rural economic development, personal security and other concerns."

In starker terms, this lack of access leaves rural women particularly vulnerable to violence from political conflict and from their domestic partners. Their geographic isolation and the lack of a supporting agricultural infrastructure translate into a loss of livelihood and difficulties in obtaining an education or needed social services.

Despite these odds, there are successes at the grassroots level, and that is what the Women's Division wanted governmental representatives at the commission meeting to realize, said Tatiana Dwyer, a division staff executive working on global justice issues.

"Our goal was to facilitate the dialogue between policymakers &ellipsis and the grassroots level," she explained. "Empowerment, especially economic development, is a great thing, but it should be supported by policies."

As it has in previous years, the Women's Division, the administrative arm of United Methodist Women, sponsored international participants who attended the first week of this year's commission meeting, which began Feb. 27 and continues through March 9.

One of the nine participants, Nelcia Hazell, a community organizer with the Caribbean Conference of Churches, was familiar with the process, having been involved in preparatory work for the 1995 U.N. Fourth World Conference on Women in Beijing and the reviews of that conference five, 10 and 15 years after. 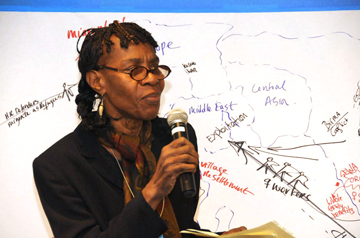 Nelcia Hazell of the Caribbean Conference of Churches participates in a discussion on migration during the U.N. Commission on the Status of Women meeting.

Hazell, a Methodist from the island of St. Vincent, said she has appreciated these interactions, which allow her to interpret back home the discussions of the United Nations and its member states on a wide range of social issues. Her involvement has "provided me with a lot of information that I would not have had otherwise," she noted.

Other UMW participants, like Naw Lee Myar of Myanmar, were attending their first U.N. gathering but were eager to make connections.

Now, she is contemplating the happy possibility that recent political changes in her country, after years of military rule, will allow other nongovernmental organizations to "come and work with us." A negotiated ceasefire also would make her association's work easier along the border.

"Maybe many people from refugee camps will come back," she said. "We need to prepare for them."

United Methodists have a decades-long involvement with the U.N. Commission on the Status of Women, working with Ecumenical Women and other nongovernmental partners.

Preparations to respond to this year's theme of empowering rural women started long before February. UMW sent a questionnaire to its regional missionaries asking about the most pressing needs of rural women in their regions. "We wanted to take this information and incorporate that into our advocacy statement," Dwyer said.

That statement notes the obligation of nations to protect their female citizens through international human rights law. "Frequently, nations offer only superficial commitments to women's needs and rights, doing little to fulfill this commitment," the statement said. "Women's ministries in many countries have limited scope and limited power, which allows states to minimize their commitment to women's equality." 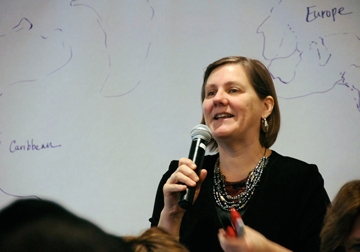 Carol Barton of United Methodist Women moderates a March 1 discussion about migration and rural women at the Church Center for the United Nations.

UMW and the United Methodist Board of Church and Society were among the organizations co-sponsoring a variety of "parallel events" at the Church Center for the United Nations during the commission meeting.

During a March 1 morning session, for example, Carol Barton, a Women's Division executive, led participants in a discussion about "the push factors" for internal and international migration of rural women. After talking in small groups, the women shared their thoughts with Barton, Hazell and others as leaders placed key words strategically on a global map drawn on a long sheet of white paper.

One woman, who had migrated from Peru to Norway for political reasons, spoke forcefully in Spanish about the stories of women from other countries she has met in Norway.

Throughout the discussions and panel presentations, participants learned about the importance of economic empowerment as a means of improving the status of rural women. Judith Daka, a UMW participant from the Ecumenical Development Foundation in Zambia, believes empowering the grassroots can improve a nation's economy as well.

She is helping women participating in "village banking" by forming small groups that provide small loans while sharing information on topics of interest, such as gender violence, girl-child education, nutrition and climate change.

"Every week, we meet together, we drop a coin," she said. "At the end of the year, we close the books and we share the dividends equally."