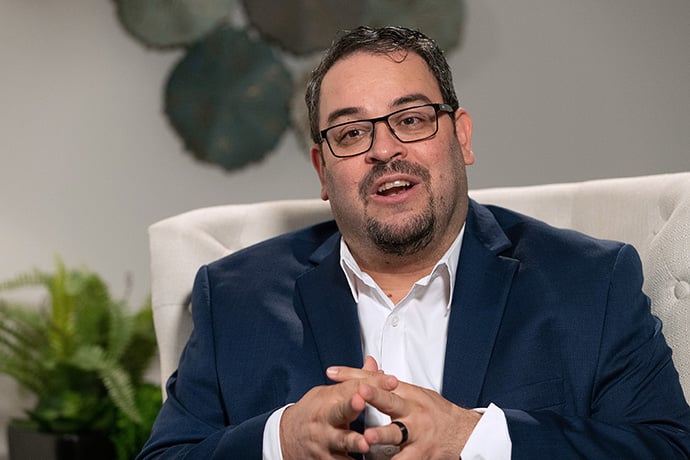 The Rev. Giovanni Arroyo serves as top executive of the United Methodist Commission on Religion and Race, the agency formed to hold the denomination accountable to its commitment to reject racism in the life of the church. Photo by Mike DuBose, UM News.

The Rev. Giovanni Arroyo poses a difficult question to white United Methodists who say they want an end to racism.

Do you want racial justice enough to voluntarily relinquish some of your power? Even those who say “yes” to this tend to make such changes in ways that don’t really shift things, said Arroyo, top executive of the United Methodist Commission on Religion and Race since Aug. 31.

“The church has all these committees,” Arroyo said. “They look around to see who's missing, which is a great question that we should be asking.”

But the tendency is to add a chair to the existing table for minority representation, rather than have one of the current committee members step down.

“As long we keep adding a chair, the power dynamics still don't change,” said Arroyo, the first Latinx person to lead a United Methodist general agency. “When people are willing to step up and relinquish that seat and get someone else, then you start to shift that power and allow new ways of being. To me, that's a challenge for the church, and that's the challenge of diversity and inclusion.”

Arroyo knows firsthand about being an “other.” A native of Puerto Rico, he arrived in the U.S. as a boy. His family attended Knickerbocker United Methodist Church in Brooklyn, New York, where he first felt a calling to ministry.

By the age of 10, Arroyo was “playing church” in the living room of the family apartment, leading 16-20 other children in worship.

“By the age of 12, I preached my first sermon at Church for All Nations in Manhattan,” he said. “And then I started to preach in my local church and preach for the district.”

Arroyo was a pre-med student and studied psychology in college. He earned advanced degrees in clinical mental health, management and divinity.

Before committing to ministry, Arroyo was a researcher at The City College of New York, studying language and psychology. He’s researched violence and child abuse, drug addiction in young adults and taught English as a second language.

Handy got to know Arroyo in his role as a Religion and Race board member.

“He has an appreciation for difference — difference of language, difference of customs and practices and patterns. He finds a way to align himself and integrate the value of other people's culture and perspectives in his work.”

After starting his career as a pastor in 2001 in Connecticut, Arroyo was called into service after the Sept. 11, 2001, terrorist attacks, counseling bereaved relatives of victims at Bellevue Hospital in New York. He left the New York Conference on loan to the Baltimore-Washington Conference in 2004 to serve as pastor of two Hispanic congregations and hold other leadership posts.

In 2010, Arroyo was hired as the team leader for program ministries at Religion and Race, responsible for programming and resources.

Since being appointed to the top job at the agency in 2021, Arroyo has continued the policy of making GCORR less U.S.-centric.

“In 2012, activities expanded to the worldwide church, but our budget was reduced,” he said.

“There's more need with less resources; more demand, but not enough supply,” Arroyo said. “That's the reality of where we live.”

Historically, the agency generated its educational materials in the U.S. and made them available to Methodists who live elsewhere.

“Those resources were very U.S.-focused,” he said, “and so I have invited siblings from the central conferences to be contributors to the development of resources.”

African United Methodists have an act of Pentecost resource being finalized for GCORR, and it will be offered to U.S. churches, he said.

“We really had to be intentional about our central conferences and the worldwide nature of this work,” Arroyo said. “What does that look like when we look into the contextual reality in South Africa or the Philippines or Europe?”

Arroyo said he has many questions still to answer about the agency’s future, including:

“When we look at the reality of who we are as United Methodists, the denomination does not reflect our society,” Arroyo said. “We have very, very white family membership. … Churches are in places that sometimes don't reflect the community that we serve.”

To change this, Arroyo is cultivating agility among his staff.

“I told the staff, ‘Right now, we are in the airport terminal trying to get boarding passes printed so that we can get on the plane and figure out where we sit,’” Arroyo said.

“This is our Southwest Airlines approach, where you want to be very clear about what role you will play, and how each will build on each other’s skill sets.”

Bishop Thomas J. Bickerton used his first address as Council of Bishops president to call on backers of a breakaway denomination to stop mischaracterizing The United Methodist Church.
Church Leadership