The Rev. Laurie Raulston said she came to counter a white-supremacist rally in Shelbyville because she needed to live out her baptismal vows.

“I did my first baptism last week, and I didn’t feel like I could ask a teenage girl to resist evil, injustice and oppression if I’m not doing it myself,” said Raulston, the pastor of Normandy United Methodist Church, about 12 miles from the protest site.

She was among an ecumenical group of a dozen or so clergy who braved a cold, blustery morning to confront slogans of hate with hymns of praise.

Throughout the week, people across Tennessee anxiously braced for two “White Lives Matter” rallies Oct. 28. The same white-supremacist groups whose protest turned violent in Charlottesville, Virginia, had scheduled demonstrations in Shelbyville and Murfreesboro in protest of refugee resettlement and immigration.

In Shelbyville, Tenn., law enforcement kept the white nationalists and counterprotesters cordoned off into separate sections across a four-lane road. To enter either side, people had to go through two checkpoints where law enforcement swiped them with metal detectors. Photo by Kathy L. Gilbert, UMNS.

Ahead of the rallies, Nashville Area Bishop William McAlilly — whose area includes both communities — called on United Methodists to be peacemakers and “renew our personal and collective commitment to stand against racism and the violence born from it.”

Some clergy at the prayer service believed it best to stay home and not contribute to the commotion of rally crowds. Still others felt called to stand witness at the rallies with an alternative message.

The Rev. Max Mayo, the superintendent whose district includes both Shelbyville and Murfreesboro, attended both the prayer service and sang at the counter protest. 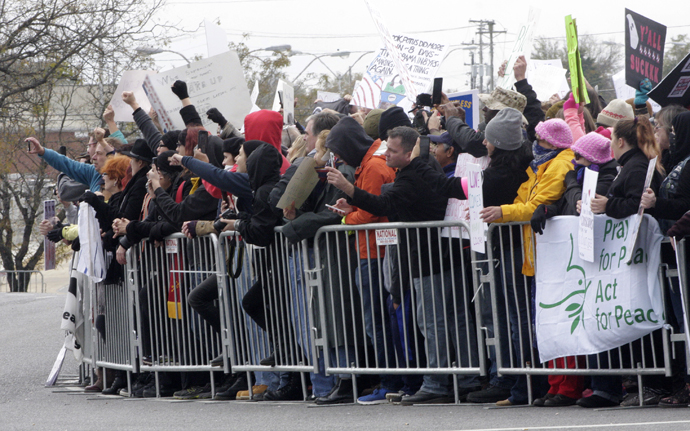 An ecumenical group of clergy, including United Methodists, joined a group of counterprotesters as the same white-supremacist groups whose protest turned violent in Charlottesville, Va., held a rally in Shelbyville, Tenn., on Oct. 28. Photo by Kathy L. Gilbert, UMNS.

“This is an expression of our understanding of love of God and love of neighbor, which includes concern for social justice,” Mayo said. “To do otherwise would be a betrayal of our discipleship.”

In Shelbyville, the atmosphere was tense as people waited for the rallies to begin. Law enforcement kept the white nationalists and counterprotesters cordoned off into separate sections across a four-lane road. To enter either side, people had to go through two checkpoints where law enforcement swiped them with metal detectors. People could not bring any guns, bags or anything that could be used as a weapon into the protest sites.

More than an hour before the scheduled rally, counterprotesters were already filling their section.

The Rev. Eric Little, a United Methodist pastor dressed in full clergy vestments complete with a Cross-and-Flame stole, led the clergy in the hymn sing. He brought dozens of songbooks for others to sing along. 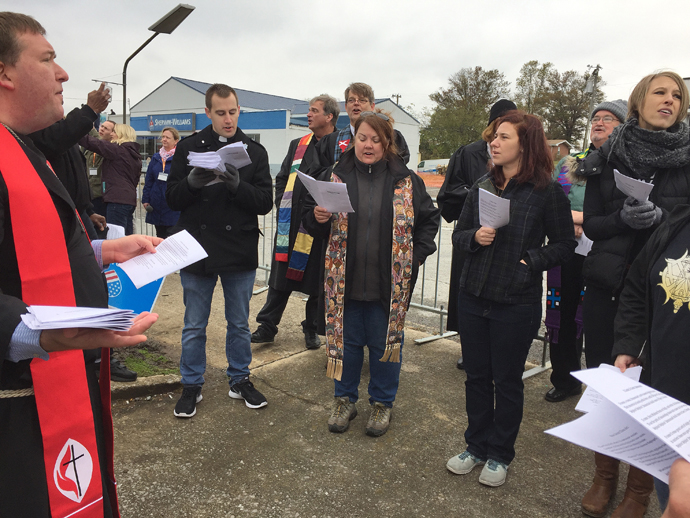 The Rev. Eric Little, United Methodist pastor, led clergy in singing hymns such as “Amazing Grace” and “This Little Light of Mine.” Little said, “The songs were our sermon.” Photo by Heather Hahn, UMNS.

As the clergy stood singing familiar songs such as “Amazing Grace” and “This Little Light of Mine,” other counterprotesters joined the chorus. When the clergy began “Down to the River to Pray,” one of those who sang along was a young man wearing a black beret and shirt identifying him as part of “antifa,” the militant antifascist movement.

The white nationalists arrived more than an hour after their scheduled start time. Many carried shields or flags with a black X across. Others carried Confederate battle flags. The crowds on each side began shouting rival taunts and chants, but the gatherings remained peaceful.

The counter protesters outnumbered the white nationalists nearly two to one, The Tennessean reported. One man was arrested for disorderly conduct.

The clergy kept on singing through most of the counterprotest. They paused when counterprotesters played the Rev. Martin Luther King Jr.’s “I Have a Dream” speech over their public-address system, drowning out the white-nationalist speaker. 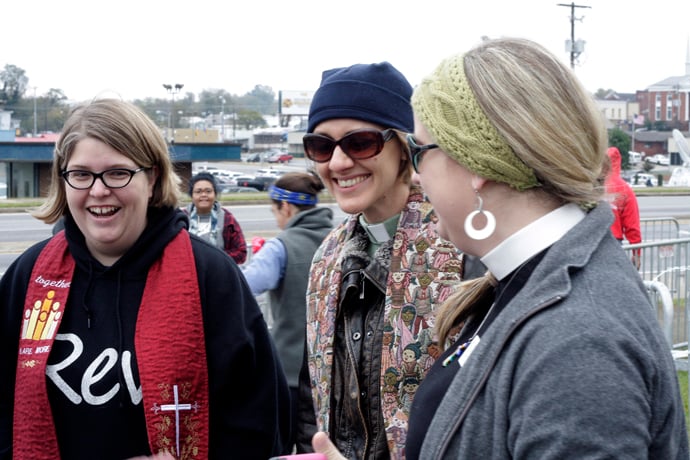 The Rev. Adriane Curtis found it particularly moving to hear King’s words. The pastor of the United Methodist church in Royal Center, Indiana, drove more than six hours to join clergy friends at the counter protest.

“It was a good day,” Curtis said, “a good demonstration of unity and love.”

In Murfreesboro, about a 30-minute drive from Shelbyville, the atmosphere was more festive. About 20 United Methodists joined a crowd of about 350 counterprotesters who lined Church Street, a main highway through town. They expected to greet the bus of white nationalists with chants of “Refugees are welcome here” and “Murfreesboro loves,” as they drove in from Shelbyville.

“Even on their way, they’ll know this place is full of love,” said the Rev. Jacob Armstrong, the senior pastor of Providence United Methodist Church in Mount Juliet.

The Rev. Stephen Handy, senior pastor of the multiethnic McKendree United Methodist Church in downtown Nashville, quickly added that he felt the church could offer an alternative vision. 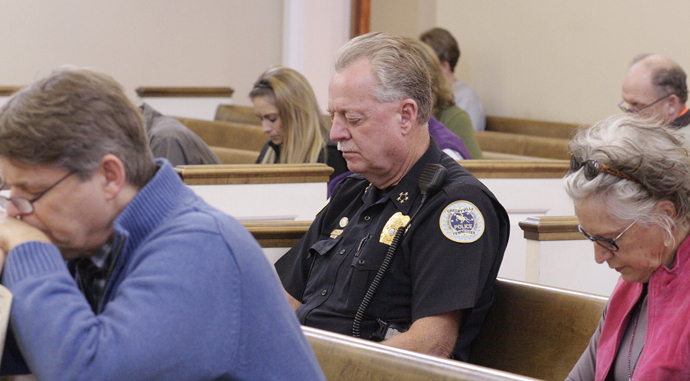 The Bedford County Ministerial Association held a prayer vigil at the First United Methodist Church of Shelbyville on Oct. 27, a day before white-supremacist groups planned to hold rallies in the state. During the vigil, participants prayed for officers, first responders and emergency personnel. Prayers were also offered for the community and for unity. Photo by Kathy L. Gilbert, UMNS.

“The alternative is always different from what the standard American slogans are,” Handy said. “The church has to disrupt that in a positive way by suggesting we always default to love. We stand together in solidarity with the body of Christ.”

The Rev. Jackson Henry, a member of St. Mark’s United Methodist Church in Murfreesboro, carried a sign that said “Love God, Love Neighbor.” He has long stood in support of the influx of refugees and other immigrants into the growing university town. “We have to tell people how much they are welcome here,” he said.

The Rev. Carlos Uroza, pastor of the First Hispanic United Methodist Church in Nashville, handed out candy to the waiting counter protesters. “I am trying to do a little sacramental action,” he joked, “trying to share a little chocolate and keep people warm.”

The long-expected bus never showed. Only about 30 white nationalists showed up in Murfreesboro’s town square and they were far outnumbered by counter protesters, the Tennessean reported. The white nationalist groups ultimately canceled their planned rally.

Meanwhile, the United Methodists and other counter protesters lining the highway stayed in good cheer. While it’s unclear whether any white nationalists passed their way, plenty of drivers slowed down to honk and wave in support of a message of love.

Hahn and Gilbert are multimedia news reporters for United Methodist News Service. Contact them at (615) 742-5470 or [email protected]. To read more United Methodist news, subscribe to the free Daily or Weekly Digests.

United Methodists in Knoxville, Tennessee where a fatal school shooting happened April 12 are trying to help a school that was already reeling from shooting deaths of four students since January.
Social Concerns

An African American woman recalls instances of racism while she and her husband were searching for housing in the 1950s and 1960s.
Social Concerns

Though the motive is still under investigation, United Methodist leaders say the killings at Atlanta area massage parlors took place as violence increases in the U.S. against those of Asian ancestry.