Since the summer 2011 Souris Valley flood, which drenched this city of 41,000, the Rev. Debra Ball-Kilbourne has led her congregation on a journey no one planned to take. However, today, mission and ministry are bringing new life to the 155-member church.

On June 24, 2011, the Mouse River overflowed its banks, and floodwaters rushed in at 75 miles an hour, ravaging the basement of Faith United Methodist Church. The powerful torrent pulled the refrigerator out of the wall socket and into the raging waters. All that happened, despite a hastily constructed 40-foot temporary dike around the area.

Seven weeks of flooding in the Souris Valley led to the worst disaster in state history. The catastrophe left 8,000 to 9,000 people homeless in central North Dakota. Faith was one of 24 churches sustaining heavy damage.

Nearly two years after the flood dramatically altered her church building and her ministry, Ball-Kilbourne reflects on the disaster and the events that followed.

Faith is in a new, permanent location. "We purchased 14 acres of land last October, out of the flood zone," Ball-Kilbourne said. "It was a huge difficulty for us to relocate, but it was cheaper and wiser for us to do so.We purchased 14 acres and two buildings - one ready to move into - for $1.1 million." The cost of repairing the old building would have been greater.

"The change in location has been good for us," Ball-Kilbourne added. "There is new momentum, a lightness of heart, and every Sunday there are new faces checking us out. On Palm Sunday, we will add eight new members, and last Sunday, I baptized three. So, it hasn't been a bad decision, although it certainly was a painful one. We did lose some members to our sister church (Vincent United Methodist), which offered us hospitality for 15 months."

She said how the congregation afforded the move is another story in and by itself.

"We have only 70 giving units. We had a Miracle Sunday and invited congregations from the conference to participate." Individuals and churches from the Dakotas Annual (regional) Conference and across the United Methodist connection responded.

The congregation of Faith United Methodist Church in Minot, N.D., worshipped in their new-to-them building for the first time in October 2012. A UMNS photo by Lisa Eriksmoen.

The road leading to that miracle was tough, Ball-Kilbourne admitted. She recalled that Minot and surrounding communities were ill prepared to meet the physical and spiritual needs that the flood brought.

Some "4,100 homes and many, many schools and businesses were lost or greatly impacted," she said. Despite having two mandatory evacuations, "the second one gave little warning, and many people lost nearly all or all personal possessions. Many lost both home and business. Our parsonage was dry, but the church was lost."

Ball-Kilbourne has spent much of her 30-plus years of ministry in disaster response. Because of heavy snows the previous winter, she had anticipated flooding and held the first case-management training several weeks before the flood occurred.

"However, I had no idea that Faith United Methodist Church's building would become severely impacted in the flood, or that approximately 40 families would either lose their homes entirely or have to rebuild their homes after gutting them.

"The flood changed my entire ministry here," said Ball-Kilbourne, who, in 2011, was just beginning her second year at Faith.

The congregation had made few plans to cope with disaster. In one administrative council meeting, they had discussed what would be saved and how - church records, the contents of the congregation's very large food pantry, worship materials and office supplies.

"We evacuated the church, including the food pantry/hot lunch ministry, twice," she said. "But the second evacuation announcement came so quickly and demanded such quick work from us that we were grateful when complete strangers - two United Methodists from Colorado and (personnel) from Minot Air Force Base - arrived to help.

"We could not have saved the church or the food from our major ministry without 'angels unawares.' People all over the area speak of 'angels unawares' coming to their aid, either moving goods during the evacuations or opening safe buildings/garages and storing goods for months." 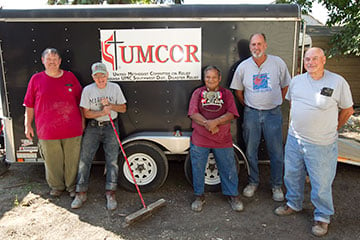 A United Methodist Volunteers in Mission Team from the Indiana Annual (regional) Conference helped homeowner Edward Ortiz (center) gut the interior of his Minot, N.D., home and clean up after flooding in June 2011. A UMNS file photo by Mike DuBose.

Ball-Kilbourne expressed regret that the conference disaster plan, which she helped to develop after flooding in 2009, did not cover how to deal with the loss of a church building.

"How foolish could we/I have been?" she asked.

Because of strong partnerships within the conference and the community, Faith was able to resume ministry quickly.

The church's food pantry operated, first out of a mobile unit and then out of a small building, free of charge. "However," Ball-Kilbourne said, "we identified quickly that those we serve had great needs, magnified by the flood, that could be addressed more completely if we developed a new interfaith/interagency partnership. We have met for nearly two years under a 501c3, called 'The Welcome Table' and hope soon to provide food, shelter, case management, free health care and clothing from a 'one-stop shop.'"

Oil is a huge business in North Dakota, but the Bakken Boom has added to the heartache of people displaced by the flood.

"To put it differently," Ball-Kilbourne explained, "while 4,100 homes were lost in the flood, many others were unavailable for local need because they were being purchased or rented - at exorbitant prices - to oil companies needing them for their workers. One study indicates that 70 percent of the renters cannot afford to rent in and around Minot. That same study indicates that the prices of non-Section 9 rentals cost the same as New York rentals cost. Affordable housing has been the biggest obstacle."

Recruiting volunteers to assist with flood cleanup also proved challenging, perhaps because by June 2011, other areas of the United States were reeling from more than 300 twisters that ripped through the Southeast on April 27, killing 321 people, and the May 22 EF-5 tornado that wiped out much of Joplin, Mo., and claimed 158 lives.

The greatest need was people to come and help muck/gut and rebuild. "The flood was late June," Ball-Kilbourne said. "The first snows come to the Dakotas usually in October. The first Federal Emergency Management Agency units didn't arrive in significant numbers until Thanksgiving. Housing for flood survivors became critical."

However, she added, "True to its reputation, the United Methodist Committee on Relief was among the first to arrive and, we anticipate, will be among the last to leave."

UMCOR's case management trains Resource Agency Flood Team case managers and benefits all flood survivors. UMCOR sent an initial grant of $10,000. After the initial poor turnout of volunteers, the Rev. Tom Hazelwood, who heads U.S. disaster response for UMCOR, invited an adviser to review the situation. UMCOR hired an associate response coordinator - Bob Lower, a Faith member and former missionary with the United Methodist Board of Global Ministries - to oversee disaster response for the Souris Valley.

Since June 2011, the biggest change for Faith United Methodist, of course, has been moving the congregation's facilities out of the flood zone, which also flooded in the late 1960s. The church continues to have flood insurance.

"Take time to grieve," she said. "Celebrate new beginnings. We found it to be important, as people moved into either their rebuilt home or a new home, to do a home blessing." Each family or individual received a loaf of homemade bread, honey, a new cross for the wall (created by a man in the church) and a quilt piece made by Faithful Quilters.

"It took faith to move - and we struggled with the decision - but felt strongly that God was guiding us to take the steps in that direction," Ball-Kilbourne said. "We have never looked back."