The Rev. Wilma Bone didn't know what to expect that Friday night as she picked her way through tornado-tossed rubble to Henryville United Methodist Church.

But when she saw the steeple and bell tower, still standing after an EF4 tornado barreled through her southeastern Indiana town on March 2, 2012, the comforting words of Hebrews 13:5-6 kept coming back to her.

"Since God assured us, 'I'll never let you down, never walk off and leave you,' we can boldly quote, God is there, ready to help; I'm fearless no matter what. Who or what can get to me?"

Certainly, such a message of assurance was needed. The twister, on the ground for more than 50 miles, generated 170 mph winds. Thirteen people perished, including one in Henryville. Two hundred homes and many businesses were wiped from the landscape. The schools sustained major damage.

Bone didn't realize it yet, but the Rev. Jim Byerly, disaster coordinator for the Indiana Annual (regional) Conference's Southeast District, was already in Henryville, establishing contact with the command post and making his presence known.

At the same time, Bone said, "I was trying to find as many people as I could, as well as trying to get to the parsonage, which we were not able to do until Saturday."

Late that night, Bone's district superintendent reached her on her cell phone.

"He came the next morning to be my pastor," she recalled. "He said he wanted to help me in whatever I needed to do."

But that was just the beginning.

"As soon as (landline) phone service was restored, I received calls from pastors in every state in the lower 48. First, they asked, 'How are you?' and then, 'What can we do to help?'"

United Methodist connectionalism, she discovered, is alive and well.

"We may not always agree," Bone said, "but when we bind together as the body of Christ, we are a force to be reckoned with."

UMCOR present for the long haul

Bishop Mike Coyner and the conference disaster team arrived that Monday. "David Powell, the head of the team, called me at least once a day to ask, 'How are things going?' and 'What are you doing to take care of yourself?'" she recalled. "Those memories bring tears to my eyes as I remember all the ways people helped and supported us."

Maintaining communication, getting water and "just figuring out where to start and how to help" were the greatest challenges. Bone was disappointed that the church building was not in adequate shape for use as a shelter.

However, United Methodists and their neighbors rolled up their sleeves and went to work in other ways - paying insurance deductibles, replacing roofs and siding for homeowners who lacked insurance, and furnishing food, clothing and money for those who were suddenly jobless. 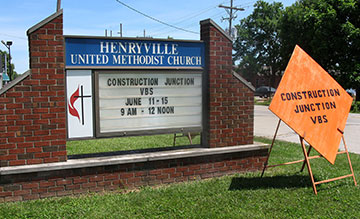 Construction Junction was the theme for the week literally and figuratively. A UMNS file photo.

"We helped people with immediate financial needs," Bone said, noting that some already lived from paycheck to paycheck. "I am not talking about hundreds of dollars for each person but just some cash" to buy gas, refill prescriptions and replace eyeglasses.

The church building needed attention, too.

The twister had blown out all of the windows in the educational wing; caused roof, gutter and some structural damage; destroyed portions of a fence; and broken some stained glass.

"The biggest damage," Bone said, "happened whenhailstones went through the roof, through the ceiling tiles in the sanctuary. This caused dry insulation to come down and cover the entire sanctuary with about three inches of the stuff.It was awful.Itstuck to the walls and hung from the ceiling.It was all over the place."Because contractors could not match the tiles, they had to replace the entire ceiling as well as the insulation. The congregation worshipped in the basement until two weeks beforeChristmas.

The United Methodist Committee on Relief, along with many volunteers, responded immediately with work teams and financial assistance. "UMCOR provided training,teaching people how to work in long-term recovery and case management," the pastor noted."They provided lots of media coverage so people would know how to help us and how to respond.UMCOR provided funds to help finish repairing or rebuilding at least 10 homes that other churches had started.

"UMCOR is still working in Henryville, and they have promised to be there until the last need is met."

The Rev. Daniel R. Gangler, Indiana Conference director of communication, noted that United Methodists helped to distribute an information sheet to residents. He stressed the importance of conferences contacting their state Department of Homeland Security for assistance following a disaster.

"After the tornado," she said, "there was debris everywhere. Youcould hardly drive down the streets because of the limbs and treesdown."People scrambled frantically through the debris to salvage remnants of their former lives. Houses were reduced to piles of bricks and splintered boards. Landmarks had disappeared.

Volunteers delivered food."We had barbeque, pizza, fried chicken - churches cooking three meals a day," Bone recalled."If anyone went hungry those first two or three weeks, it was their own fault.We had the Tide truck in our church parking lot."

"After the tornado, I got lost because things looked so different.I missed the drive to the bankone day, got all the way to the railroad track and realized I had missed my turn because Thelma Masters' house was gone."

Today, she said,"Henryville looks a lot better.Houses are being rebuilt or remodeled." The school was rebuilt in five months.

"One can still see there is a lot of work to be done," Bone continued."The thing you hear asyou talkwith people is that they are so thankful, even though they may have lost everything. We had a service ofcommemoration on March 2, the anniversary of the tornado.We took time to remember, give thanks and hear a message of hope." The bishop, the district superintendent and the governor attended.

As Bone reflected on the disaster, she noted the importance of working with other congregations in the community. "If everyone tries to do everything at the same time, that does not help," she said. "You cannot do it alone."

That advice really paid off the summer after the tornado when Edwardsville United Methodist Church members literally took vacation Bible school on the road and traveled 25 miles to their Henryville neighbors. The aptly named curriculum was "Construction Junction."

"It was a great opportunity for our church to serve in mission and provide help in Henryville," said Pam Beckman, Edwardsville VBS co-director, donning a hardhat and bright-yellow safety vest. "Most of our people had been looking for some way to help.

After the tornado, Bone asked for a part-time appointment after taking July and August off for personal renewal. "I was not ready to do paperwork and learn new names," she explained."Iwas given those two months and then was asked if I would go to Jacob's Chapel in New Albany until they got a new pastor.I was there two months." Since Dec. 1, 2012, she has served Mount Lebanon United Methodist Church in French Lick, Ind.

The Rev. Gary Cooper started his new appointment in Henryville on July 1.

"The congregation does not have a disaster plan in place," Cooper said, "because they are still going through the disaster. They are weary, exhausted and worn down."

But the disaster has strengthened their faith.

"We have learned that only our relationship with Christ will last," Cooper said. "Everything we own can be taken away in a blink of an eye. But when you have Jesus, you are always a winner."

Bone said she recently got an email from friends in Grand Rapids, Mich. She met them in Henryville just after the tornado. They were on their way to their Florida vacation, heard about the tornado and ended up spending a week in Henryville, "doing whatever they could to help."

"We have maintained that friendship that developed during those days," Bone said.

"How God brings special people into our lives truly amazes me."

A footnote: 'It's all good'

Bone sent this note recalling her encounter with one family that lost worldly possessions but gained something far more valuable.

"About three weeks after the tornado, Igot word of a family living in a garage, without water or electricity.I went over there and saw a Porta Potty outside with a sign that read, 'If you have to use this, it is all right. Just keep it clean. It is our personal bathroom.' I did not find the owner until two days later. I asked the mother how we could help her family. Her response was, 'Preacher, we prayed God would spare our lives, and he did.'

"The rental house suffered structural damage, but they had managed to save most of their stuff. She said, 'Preacher, it's all good.' I offered her cleaning supplies, and she said, 'It's all good, Preacher. I already have stuff to clean with.' I tried to give her a $25 gift card. She said, 'Give it to my neighbor.' The garage did not have doors; the opening was tarpaulins. She just kept saying, 'It's all good.' I saw her the next day. She said someone was bringing a used mobile home that would need painting. I said, 'Let me buy your paint.'

"She said, 'Preacher, what about it's all good do you NOT understand?'"