A UMNS Report
By Linda Bloom and Pierre T. Omadjela*

To call attention to continuing human rights atrocities in eastern Democratic Republic of Congo, United Methodists and others traveled to the United States and Canada to promote a petition for peace; testified before a U.S. congressional subcommittee; and met with DRC President Joseph Kabila.

The 2012 United Methodist General Conference, the denomination's top legislative body, also drew attention to the region in May by approving the creation of a fourth episcopal area, the East Congo Episcopal Area, within the Congo Central Conference.

A 30-member delegation of religious and civil society leaders visited the U.S. and Canada in September, carrying a petition with one million signatures, calling for peace and dialogue with neighboring Rwanda, considered to have facilitated the violence.

The violence intensified last spring when a group of former soldiers defected from the Congolese army to form the M23 militia. Human Rights Watch has documented the rapes and other atrocities committed by the M23 militia, which the organization says has received direct support from the Rwandan army.

Bishop Ntambo Nkulu Ntanda, of the denomination's North Katanga Area and a delegation member, told a U.S. congressional subcommittee Sept. 19 that "Rwanda is killing our people" and asked for intervention by the U.S. government. 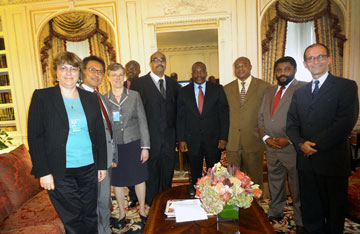 Ntambo made the same request of Canada in mid-September when speaking to students at the Toronto School of Theology, University of Toronto, after meeting earlier in Ottawa with Canadian government officials.

Several delegation members, along with representatives of the United Methodist boards of Global Ministries and Church and Society and United Methodist Women met in New York on Sept. 27 with Joseph Kabila, DRC president.

The DRC president began by thanking the United Methodist agencies for welcoming the DRC delegation and organizing meetings with officials in New York and Washington, then offered some background on the history of the Congo and the current conflict, which he hopes can be resolved peacefully.

He urged Americans to hear the Congolese story and invited church leaders to visit the DRC as soon as possible to interact with ordinary Congolese people and hear their stories, according to a report from the meeting.

United Methodist representatives assured Kabila that the DRC is an important part of the worldwide church and expressed support for any action or initiative directed toward peace in the country and that African region.

"We each reiterated our wish for durable and lasting peace as well as sustainable and secure society for DR Congo," said the Rev. Liberato Bautista, the staff executive for Church and Society's U.N. and international affairs ministry, who attended the meeting at the Waldorf Hotel.

"We prayed at the end of the meeting, asking God for the leadership of Congo to be guided in the ways of God so that justice and peace in the Congo may become real and visible," he added. 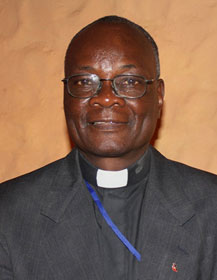 Thomas Kemper, top executive of the Board of Global Ministries, was unable to attend but sent a letter that noted the church's concern about the violence against women in eastern Congo and expressed "words of commitment to your country and to our joint mission and ministry in the Democratic Republic of Congo."

A Global Ministries delegation met with Kabila after he was elected president in 2001, and he gave a speech at Africa University in 2009.

"Despite the security concerns in that area of the DRC, I will go and serve my God," he said.

The Rev. Kalema Antoine, director of connectional ministries of the East Congo Annual (regional) Conference, pointed out some of those concerns. Armed groups in the North Kivu, South Kivu, Orientale, Equatorial and Maniema provinces, he said, undertake acts of pillage, steal vehicles, kidnap and rape women and children and kill in attacks where civilians are indiscriminately targeted.

Even Kalema has been a victim of the violence. "I was carried away by soldiers who wanted to kill me," he recalled. "I had my life saved, thanks to one of my students who refused to see me dying.

"I have seen people dying, wives and ladies raped in front of their husbands and parents during the different civil wars," he said.

The new bishop plans to use an airplane as one way of dealing with security concerns as he visits different parts of the episcopal area.

"My plan is to inspect the entire episcopal area and ascertain the needs of the various ministries of the church and then find ways of creating an effective delivery system for the development of East Congo," he explained.

Membership growth is one of the ministry goals in East Congo. "We will make sure we double in quality and in quantity the number of Christians in our episcopal area," said the Rev. Masudi Makangula Andre, one of the pastors of the new episcopal area.

"We will apply the four areas of focus of The United Methodist Church. We will build good relationship with the local authorities and keep good contacts with the society in general. In short, we are starting the foundation of our church in the east and north part of Congo so that we may leave a good heritage for our children," he added.

The bishop hopes to cultivate unity and peace. "My prayer is to see the children of God unite and build the kingdom of God in East Congo. It is my sincere hope that by the grace of God, to see this episcopal area develop from its ashes to a livable and peaceful area," the bishop said.

*Bloom is a United Methodist News Service multimedia reporter based in New York. Follow her at http://twitter.com/umcscribe. Omadjela is director of communications and development for the United Methodist Central Congo Episcopal Area.