More than 70 United Methodist clergy and lay people in the United States have sent an open letter to the Council of Bishops accusing retired Bishop Melvin G. Talbert of encouraging disobedience to the denomination's stance on homosexuality.

Specifically, the group's letter takes issue with Talbert's May 4 remarks at a United Methodist gathering outside General Conference, the denomination's top lawmaking body. The document also criticizes Talbert's June 16 sermon at the ordination service of the California-Pacific Annual (regional) Conference, in which he reiterated his earlier remarks.

Talbert said Aug. 24 that he stands by his statements. "General Conference made its decision in Tampa," he said. "I was there. I heard the debate, and in spite of that, I made my decision on May 4, and I stand by that."

The letter urges the bishops when they next meet to "publicly censure" Talbert. It also asks the executive committee of the Council of Bishops to file a formal complaint against Talbert.

The letter requests the bishop be charged with violating his responsibility to uphold church law, disseminating doctrine contrary to the standards of The United Methodist Church and engaging in behavior that undermines another pastor's ministry.

"The derogatory rules and restrictions in the Book of Discipline are immoral and unjust and no longer deserve our loyalty and obedience," Talbert said in May at the Love Your Neighbor Tabernacle outside General Conference. "Thus the time has come for those of us who are faithful to the Gospel of Jesus Christ to do what is required of us&ellipsis . The time has come to join in an act of biblical obedience."

Talbert called on the more than 1,100 clergy who signed pledges to officiate at same-sex unions to "stand firm."

The Book of Discipline, the denomination's law book, says the practice of homosexuality is "incompatible with Christian teaching." The book prohibits United Methodist churches from hosting and clergy from officiating at "ceremonies that celebrate homosexual unions."

The 2012 General Conference, when it met April 24-May 4 in Tampa, Fla., rejected efforts to change that language, including a proposal to say the church was in disagreement about homosexuality.

"We are deeply concerned that Bishop Talbert has undercut that very discipline and order, by encouraging dissension, disunity and disobedience, and advocating anarchy and chaos in response to the actions of the 2012 General Conference, taken after focused prayer, study, and holy conferencing," the group's letter said.

Talbert, a veteran of the U.S. civil rights movement to eliminate Jim Crow laws, said he is not concerned with the possible negative reaction of other clergy.

"My only concern is doing what is right and just in the sight of God," he said. "That's simply the way I take it. I think the day has come for us to stop hiding behind an unjust law and do what is right."

How letter came to be 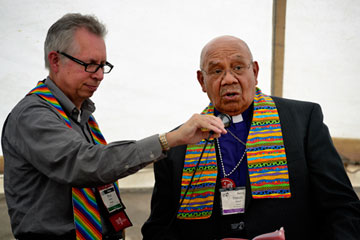 Retired Bishop Melvin G. Talbert (right) joined 14 other United Methodist bishops at a gathering on May 4 outside the 2012 United Methodist General Conference in Tampa, Fla. The gathering was organized by groups that want to see the church change its stance on homosexuality.
A UMNS photo by Paul Jeffrey.

Organizers mailed their letter of complaint to the denomination's active and retired bishops on July 19, at the time when U.S jurisdictional conferences were gathered to elect 11 new bishops.

After a month with no formal response from the Council of Bishops, the group decided to make its letter public Aug. 24, said the Rev. Thomas Lambrecht, one of the organizers. He is the vice president and general manager of the unofficial evangelical caucus Good News.

"We were waiting for the council or any of the bishops really to step forward and say that this was not appropriate, and there has been a deafening silence from the Council of Bishops," Lambrecht said.

"As a result of that, some of us felt like we needed to get this out in the public arena and make it clear that the actions Bishop Talbert is advocating are contrary to United Methodist doctrine and discipline."

The Rev. Tom Harrison, pastor of Asbury United Methodist Church in Tulsa, Okla., and another organizer, said he wants the Council of Bishops to ensure all clergy - including bishops - uphold their covenant to follow church law.

"We just want to know: Do we or do we not have to adhere to our Book of Discipline?" he said. "If everybody gets to pick and choose based on conviction and not on the response of General Conference, then we have total chaos."

Harrison later added that his large congregation expects to pay more than $1 million in church apportionments this year. "If you can pick and choose what you want to do, then we might say, 'Hey, we don't want to pay apportionments.' What authority does anybody have to come after us? 'No, you must because that's the covenant that binds us together.' "

Many of those who signed the letter against Talbert also were organizers of the FaithfulUMC petitions, which in September 2011 urged the Council of Bishops to respond to clergy's pledges to officiate at same-sex unions.

In response, the council released a statement after its November 2011 meeting declaring the bishops would "uphold the Book of Discipline as established by the General Conference."

Reaction of other bishops

What the Book of Discipline says about complaints against bishops

The letter against Talbert also noted that 14 other active and retired bishops stood beside Talbert as he made his remarks on May 4 at the Love Your Neighbor Tabernacle. Groups that have sought to change the denomination's stance on homosexuality set up the tabernacle.

"We have corresponded with all the bishops who stood with Bishop Talbert and received replies from most of them. Some did not know ahead of time what Bishop Talbert was going to say and do not support his call for disobedience," the letter said. "Others did know and do support that call. Without a public statement clarifying where those bishops stand, however, it appears to our church that all were supportive."

Los Angeles Area Bishop Mary Ann Swenson, who leads the California-Pacific Conference, was among the bishops who were there. She said that at the ordination service that followed, Talbert's sermon was well-received.

"He really is making a call for scriptural obedience and faithful witness," said Swenson, who will retire Sept.1 and become the ecumenical officer for the Council of Bishops. "We had further conversations about that at the Western Jurisdictional Conference."

The U.S. Western Jurisdiction, which encompasses much of the western United States as well as Alaska and Hawaii, has asked Talbert to oversee a grassroots movement that challenges bishops and other clergy, laity and local churches and ministry settings to operate as if the statement printed in the denomination's law book - Paragraph 161F - "does not exist."

San Francisco Area Bishop Warner H. Brown Jr., president-elect of the Council of Bishops, was also among the bishops standing next to Talbert when he made his remarks in Tampa.

He had no prior knowledge of what Talbert would say, Brown wrote in a letter to leaders of Good News and the Confessing Movement, another evangelical caucus within The United Methodist Church.

"I will administer all disciplinary processes with integrity and fairness in the future, as I have in the past," his June 15 letter said. "I also will act consistent with my understanding of scripture and in the spirit of our Social Principles which affirm, 'That all persons are individuals of sacred worth created in the image of God.'"

Individual bishops are not of like mind on the topic of homosexuality.

However, the "Council of Bishops is committed to lead the church as we seek to live in the unity, which is given to us in Christ," Germany's Bishop Rosemarie Wenner, Council of Bishops president, said on Aug. 24.

"We - the bishops of the church - uphold the Discipline of the church. We give pastoral care and we offer theological teaching to all the people in our connection. We connect with various groups in our church, inviting them to talk with each other so that we are able to continue the journey together even in our struggles to live with the differences in the questions around human sexuality.

"And we engage in robust conversation with each other, modeling that we - even though divided on the question whether or not the Book of Discipline should be changed so that same-sex marriages should be possible where the state law allows to do so - are united in Christ, and one-minded in responding to the call of making disciples for the transformation of the world."

She added that the disciplinary responsibility for overseeing bishops lies within the U.S. jurisdictions and the central conferences in Africa, the Philippines and Europe.

"At the council meetings, we engage with each other in theological reflection on many challenging questions, including the unity of the church," she said.

The Council of Bishops will next meet as a body the first week of November.