Delegates to the jurisdictional meeting July 18-21 voted to extend "extravagant hospitality" to all people including gay, lesbian, bisexual, transgender, queer, intersex or persons whose gender expression is ambiguous.

Retired Bishop Melvin Talbert was asked to oversee a Western Jurisdiction grassroots movement that challenges bishops, clergy, laity and local churches and ministry settings to operate as if the statement printed in the denomination's law book-Paragraph 161F-"does not exist."

Talbert said he has publicly stated many times that if asked to perform a same-sex marriage he will do so. He also said the active bishops of the Western Jurisdiction "will be bishops of the church" and uphold church law. 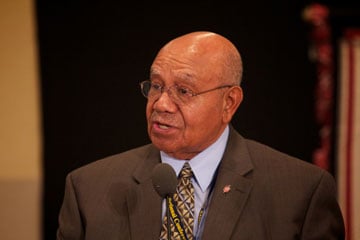 Bishop Melvin Talbert was asked to oversee a grassroots movement within the Western Jurisdiction that challenges bishops, clergy, laity and local churches and ministry settings to operate as if the statement printed in the denomination's law book-Para. 161F -"does not exist."

Bishop Minerva Carcaño, president of the Western Jurisdiction College of Bishops, said the bishops "are of one mind" during her address to the jurisdiction.

"Webelieve that our beloved United Methodist Church has been less than faithful to the biblicalmandate to accept all God's children including our LGBTQ(IA) brothers and sisters.We assumeresponsibility for preaching and teaching in every place we serve, this good news of Christ Jesuswho welcomes all," she said.

Bishop Rosemarie Wenner, president of the Council of Bishops, noted that she does not want to comment on decisions of conferences. "I trust in the process of holy conferencing, and I trust that my colleague bishops will act according to their call to serve the church as bishops of the church in the task of oversight for the general church and for the areas they are assigned to," she said. The council does not have supervisory authority over the bishops.

The five jurisdictions in the United States met in their regions July 18-21. Jurisdictions meet once every four years to elect bishops and conduct business.

During the worldwide 2012 General Conference April 24-May 4, the church voted to retain current language in its law book that declares "homosexuality is incompatible with Christian teaching." Other sections of the law book state "self-avowed practicing homosexuals" may not be ordained as clergy and that United Methodist clergy cannot perform same-sex marriage ceremonies and same-sex wedding ceremonies may not be in United Methodist churches.

A statement by the Northeastern Jurisdiction Evangelical Connection of United Methodists expressed disappointment in the vote.

"This statement stands in opposition to the doctrine and discipline of The United Methodist Church. A jurisdictional conference does not have the authority to speak in a manner contrary to the General Conference of the denomination. Therefore, we do not believe this statement can be implemented or enforced in any way," the statement said.

The group also pointed out that the position of The United Methodist Church on human sexuality has not changed.

"We pledge to you that we will continue to work for that day when we, TheUnited Methodist Church, can truly live up to our logo of open hearts, open minds, open doors," Carcaño said.

In other action, the Western Jurisdiction apologized for the actions of the 2012 General Conference and said it plans to write letters to the editors in the major newspapers of each annual (regional) conference in the jurisdiction informing them of the apology. The resolution originally was to purchase full-page ads but was amended to writing letters to the editor after consideration of the cost of full-page ads.

The jurisdiction also suggested the penalty of a suspension for 24 consecutive hours from the exercise of episcopal office for any bishop charged, tried and convicted of ordaining or appointing a "self-avowed practicing homosexual." The jurisdiction can only suggest a penalty; the trial court sets the penalty.

The action means the jurisdiction "can no longer passively live with the hypocritical oxymoron of a denomination that declares that 'God loves all' while it excludes some people from acceptance and leadership based on sexual orientation," said Greg Nelson, director of communications of the Oregon-Idaho Annual (regional) Conference.

The action is an effort "to change the conversation" and move forward, he said.

"The Western Jurisdiction embraces the denominational brand promise of 'Open Hearts, Open Minds, and Open Doors' and is working to make it a reality."

Can United Methodists be politically active? The Social Principles offer guidance about the interaction of church and politics.
Social Concerns

Churches see census as part of their mission

United Methodists across the U.S. are helping hard-to-count people ‘come to their census.’ In doing so, they hope to strengthen their communities.
Mission and Ministry