In Zimbabwe, The United Methodist Church has joined efforts with other religious voices around the world in addressing — and ultimately halting — the AIDS epidemic.

The Common Voice Initiative aims to reduce the risk through advocacy and action by leaders and followers of a broad range of religious traditions. The Common Voice Pledge, an interreligious expression of advocacy and commitment used in worship services as a response to HIV and AIDS, was developed with the help of the World Council of Churches’ Ecumenical Advocacy Alliance.

Speaking at Inner-City United Methodist Church in Harare, advocates demanded that the world’s leaders act to ensure the epidemic is brought to an end.

“The people who have helped develop and promote the Common Voice Initiative come from a variety of religious traditions, including Catholic, Anglican, Lutheran, Presbyterian, Methodist and others,” said David R. Barstow, initiative coordinator.

Through responsive words in the pledge to fight HIV and AIDS, the Inner-City congregation committed to playing its part in stopping the AIDS epidemic.

“We recognize that religious beliefs and practices have sometimes been used to justify judgmental attitudes,” Gaikayi noted, “and that the resulting stigma and discrimination have harmed people living with HIV and have weakened the global response.” 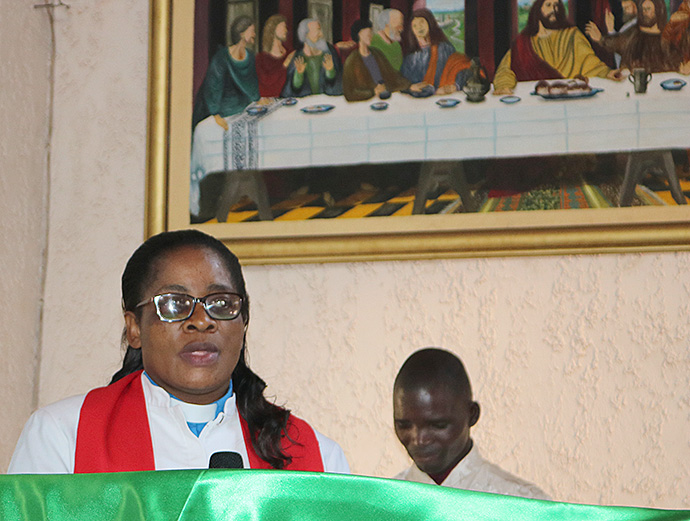 The Rev. Fatima Gaikayi, associate pastor at Inner-City United Methodist Church in Harare, says social and cultural issues have been major barriers to fighitng the AIDS epidemic. Photo by Priscilla Muzerengwa for UMNS.

Barstow provided training and other resources to local faith communities in Zambia, Zimbabwe, South Africa and Lesotho. The methodology was captured in a booklet, “Stigma-Free Faith Communities.”

“The book provides guidelines for faith community self-evaluation and transformation in order to reduce stigma and the effects it has on people living with HIV and on the response to the epidemic itself,” Barstow said.

Religious beliefs and practices sometimes have been used to encourage people with HIV to abandon medical treatment, with dire results.

While the church welcomes the use of nonmedical interventions for HIV, it rejects exclusive reliance on faith healing and encourages and supports patients to adhere to medical treatment.

“We believe that all people should have access to HIV-prevention and treatment services, including people who are marginalized by society,” Garikayi said.

In order to deal effectively with the epidemic, accurate information is essential. The church is dedicated to providing factual information about HIV and AIDS and to dispelling harmful rumors and myths about the disease.

“The church, through its health centers and hospitals, is engaged in screening patients for HIV and administering the appropriate medication,” said the Rev. Alan Gurupira, administrative assistant to Bishop Eben K. Nhiwatiwa. “After screening, the patients are provided with counseling services as well as advice on living a healthy life.”

A video that incorporates contributions from many churches, including Inner-City United Methodist, was released as a Common Voice Initiative to commemorate World AIDS Day, which marked its 30th anniversary Dec. 1.

This year’s World AIDS Day theme encouraged people to know their HIV status and to refrain from behavior that risks transmission of HIV.

An HIV self-testing project recently launched at Africa University allowed students to measure and promote the use of the self-test kits. The program strengthened the university's network of peer educators and their outreach to other young people from the surrounding area.

Gurupira remarked that creating special groups for young people, men and women can teach the importance of upholding fidelity in marriage and abstinence for those not married.

Garikayi said the church would continue to be a place of hope for people living with HIV, sharing a responsibility to reach out to the marginalized and to protect the vulnerable. She encouraged treating all people with dignity and respect and addressing social and cultural issues with love and compassion, rather than hate or rejection.

Muzerengwa and Kumuterera are communicators for the Zimbabwe Episcopal Area.

Early in his ministry, the Rev. Bill Lawrence served as counselor to pregnant women considering their options. Under a new Texas law, such a pastoral role could lead to lawsuits.
Global Health

The Connectional Table, which acts as a church council for the denomination, boosts United Methodist efforts to get people around the globe inoculated against COVID-19.
Local Church

At Hwedza United Methodist Circuit, spread within a radius of 37 miles, the pastor traveled to four local churches monthly without a vehicle.