This fall, students at Africa University were able to test themselves for HIV in a place of their choice and then, depending on the test result, take responsibility for their health.

The Africa University HIV Self Testing project — the first to be conducted at a United Methodist institution in the Zimbabwe Episcopal Area — was made possible by the donation of 750 testing kits from OraSure Technologies Pacific Biotech Company. Funding came from the United Methodist Board of Global Ministries through the episcopal area’s health board.

The project was conducted both to measure and to promote the use of HIV Self Testing kits by students who would not normally get tested by healthcare professionals.

The Africa University Clinical Research Center is coordinating the implementation of the grant under the leadership of Dr. Fadzai Mutseyekwa.

Mandla Tirivavi, the center’s program coordinator, said the project goal was primarily to strengthen the university’s network of peer educators and their outreach activities, with emphasis on engaging with other young people from the surrounding area.

Other groups involved in the project include the United Methodist Youth Fellowship at Old Mutare and the Mutare District as well as fellow peer educators from Nyadire Teachers College.

A team from the Ministry of Health and Child Care trained 28 peer educators, university clinic staff and some nurses from Old Mutare hospital.

Dr. Olusimbo Ige, executive director of the Global Health unit at Global Ministries, said the mission agency was pleased with the participation.

“We recognize the strategic position of adolescents and youth in the overall response to HIV. I am very excited to see their full participation in this project,” she said. “With such enthusiastic uptake of self-testing we are confident that we are closer to the goal of stopping HIV transmission.”

A national survey conducted in 2015 revealed that 74 percent of the Zimbabwean population knows their HIV status. However, the biggest gap is in testing of adolescents and young adults.

“We were concerned because young adults usually do not go for HIV testing,” Tirivavi said.

Through the clinic’s program, students were able to get the kit to self-test. Peer educators provided counseling and other support as needed. 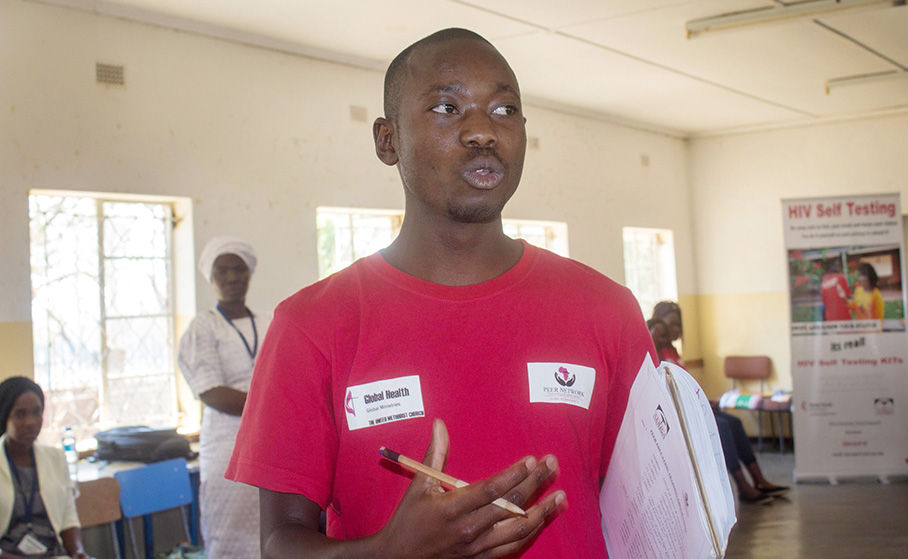 “The A.U. peer educators are very vibrant, they were driving the self-testing and also involved in training other peers,” said Tirivavi. “Young people speak the same language, face similar challenges and share the same experiences, therefore they were the best people to promote this project.”

Over 120 students collected kits, which include a swab, buffer and test tube, in the first two days of the program. Gums are swabbed and the specimen inserted into the test tube where a reactive or non-reactive result is obtained after 20 minutes. If the result is reactive, the student is advised to go to the clinic for a prick test by professionals that will confirm whether or not they have HIV.

Tsitsi Murapa, the sister-in-charge of the university’s clinic, is the patron for the peer network club.  Prior to the launch of the self-testing project, she said the clinic had an insignificant number of students coming for HIV testing compared to the population on campus.

“The first two days following the launch of the kits, we were overwhelmed by the high turnout of students who came and collected them.  In the past we recorded more students requiring testing when college opened and towards vacations, maybe that is the time they felt they needed to check their status,” Murapa said.

Over 375 kits were collected in the first four weeks.  When the project officially ended on Oct. 31, 423 kits had been distributed and the remainder will continue to be given to students who want to self-test.

“We are doing this for the sake of humanity.  We are dedicating our time and our lives for our peers and making a difference on issues that matter to young adults,” he said.

An outreach program for the Mutare District at Hilltop United Methodist Church was attended by teens and young adults in their early 30s, Manyau said. Established in 1897, Hilltop is the oldest and largest church in the Zimbabwe Episcopal Area, with a membership of over 3,000.

Evidence Mwayera, the president of Mutare District United Methodist Youth Fellowship, participated in the Hilltop outreach and said the workshop “was an eye-opener” for those involved in the project.

“The AU peer network enlightened us on how we can be able to help each other as peers in HIV/STI prevention,” said Mwayera.

Hannah Mafunda, Zimbabwe Episcopal Area health board coordinator, said the kits were only given to Africa University — the approved site for the self-testing component of the project.

“There was positive feedback from the project. The youths from 26 circuits in Mutare expressed joy at being involved in the project. Most of them committed to go back and hold feedback sessions at their churches.  They expressed willingness and availability for more similar engagements,” said Mafunda.

Africa University also reached out to Nyadire Teachers College to promote peer networking at the institution.

Manyau said the peer networkers also urged the entire university community not to discriminate against those living with HIV.  “We encourage students to remind their roommates to adhere to their medication and maintain the recommended diet,” he said.

Another peer educator, Varaidzo Matika, said she was grateful to be one of the students involved in the project.

“Peer education helps me walk the talk. It’s grounding and molding me.  It’s a place where I can be myself; I can be crazy during club activities and have fun. I love peer education,” said Matika.

Farai Danny Mhlanga, another peer educator, said the project was interesting and exciting.

“It gave me a sense of hope in eradicating the HIV epidemic in Africa. It taught us to be part of the change that Africa needs, and the change starts with us by doing more activities that change people’s lives through compassionate social work for the betterment of the society,” said Mhlanga.

So far, none of the students tested have come for professional counseling or a confirmatory test, Murapa said. Surprisingly, she added, most of the students opted to test themselves at the clinic instead of a private space.

“The students like coming to the clinic.  Some just come and relax here, without needing any of the services here.  It’s like one of their favorite hangouts,” she said.

She said the clinic needs a youth-friendly resource center. “We also need a screen where they can watch lifestyle videos. Young adults need edutainment.”

As one of the newest tools in the HIV testing services package, the self-test is expected to play an important role in accelerating progress towards the United Nations goal of 90-90-90 percentage coverage for HIV testing, treatment and viral suppression by 2020.

Chikwanah is a communicator of the Zimbabwe East Conference. News media contact: Vicki Brown at (615) 742-5470 or [email protected]. To read more United Methodist news, subscribe to the free Daily or Weekly Digests.

The United Methodist university is practicing social distancing to curb the spread of the coronavirus.
Mission and Ministry

Despite coronavirus outbreak, United Methodist clergy and churches are finding ways to connect for worship, study and ministry.