• Born into a clergy family, Namatai Chinyerere uses her melodious gospel voice to tell others about God.

• Taziwa Brian Mbwizhu has a vision “to raise other youth with talent and build a music empire in the church.”

• Chashe Chokera, 8, is a multi-instrumentalist who has already toured internationally.

In Psalm 40:3, David praises God, who “put a new song in my mouth, a song of praise to our God. Many will see and fear, and put their trust in the Lord.” Like the Psalmist, three Zimbabweans — a child and two young adults with United Methodist roots — use their musical gifts to praise God and to share their faith.

One is Loice Namatai Chinyerere, 25, of Mabvuku United Methodist Church. Born into a clergy family, Namatai uses her melodious gospel voice to tell others about God.

“Since 2014,” she said, “I have taken music as part of my life. I am complementing my parents’ ministries by taking gospel music to another level. Through my music, I have been accorded the ambassadorial status by Kubatana.net, a community organization.”

Although she earned a Bachelor of Technology degree in computer science from Harare Institute of Technology, Namatai’s passion pushed her into music. “All this started when I joined the Inner Praise Team of the UMC,” she said.

In 2016, she began recording her music. “Taziwa Brian Mbwizhu helped me a lot,” she said. “We launched a duet 8-track album, ‘Munoera,’ in 2019, and the financial support was from Denias Zaranyika, a member of the UMC.”

She said that her objective is “to win souls to Christ through music, and that people be healed, delivered and uplifted.”

Darlington Marara, Namatai’s music manager, said, “Her music soothes the heart. It gives people hope. I have personally witnessed people getting delivered and giving testimonies about her music. It brings you closer to God.”

Muriwangu Chinyerere, Namatai’s brother, said, “Namatai has chosen to serve full time in the gospel music industry and aims to win many souls to Christ. She started her music career in the UMC, and it was well received. Now it has extended to other denominations and various walks of life.

“She is very dedicated to music because she genuinely believes in what she sings and in evangelizing through music for the transformation of the world.” 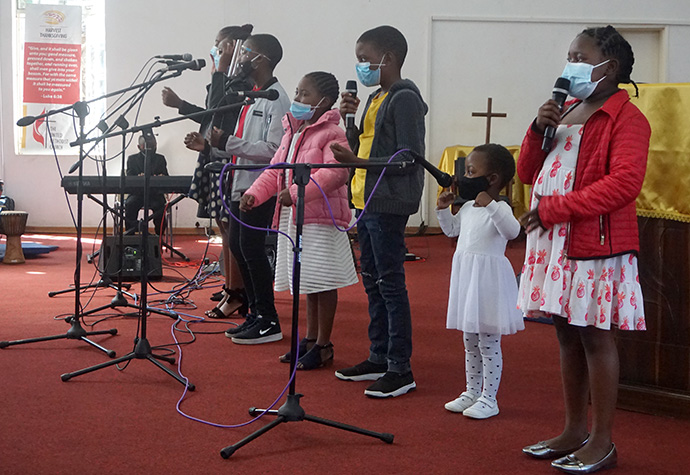 Financing her projects is expensive and challenging. “It costs a lot to produce a song, a video and to host album launches. In addition, there are few female artists to act as mentors and advisors to upcoming female musicians,” Muriwangu said.

She grew up in a family full of singers who love to sing.

The Rev. Brian Chinyerere, Namatai’s father said, “As parents, we did our best to instill life values at an early age. Namatai had church exposure and loved to sing hymns from her tender age.

“She is committed, strives to accomplish any goals that she sets and is confident. She changes the tone of the church service,” he added.

Taziwa Brian Mbwizhu, 27, who recorded with Namatai, is another upcoming gospel musician. He was inspired to sing at age 9, and at 13, he joined a church choir.

“At secondary,” he said, “I formed a vibrant music group, and thereafter, I pursued my music career. I started recording Namatai’s music and then decided to have a collaboration with her, which was a success.”

“Music is incarnated in my blood,” he said. “I feel what I play. I live and breathe music. My vision is to raise other youth with talent and build a music empire in the church,” Taziwa said.

“These two, in my view, are great musicians,” Zaranyika said.

The son of two music teachers, Chashe Chokera, 8, of Chisipiti United Methodist Church did his first Associated Board of the Royal Schools of Music, a London-based examining committee for graded music at age 5.

Chashe plays many instruments: marimba, mbira, piano and ngoma (drums), and he sings. He has been on several international music tours.

“The exposure that he gained from international music tours contributed immensely to nurture his talent,” Winnie Chokera said. “This is in addition to his exposure to music from us.”

School music teacher Theresa Covini, said, “Chashe has natural musical talent that he has displayed from this tender age, which is sweet music to every teacher. His discipline and willingness to learn makes him a pleasure to teach.”

“Chashe is incredibly talented,” added Kallah Trewartha, his grade-3 academic class teacher at Springvale House. “He is a well-mannered, polite and very kind young boy. He has an amazing future ahead of him. I think the Lord has great plans for Chashe.”

Chashe is a good influence on his peers, noted Kudzayi Ruzvidzo, whose son Jacob is Chashe’s friend. “The music that Chashe sings has helped and influenced Jacob positively,” she said.

“Jacob has now started music lessons, and it has brought the two even closer. They have a lot to talk about and their imagination has grown bigger. It has brought focus on him as well.”

Patricia Mapani, worship chair at Chisipiti United Methodist, credited Chashe’s parents with encouraging his music. “As a church,” she said, “we can see a great talent being unveiled.”

The Rev. Daniel Mutidzawanda, the church’s pastor in charge, said, “Chashe is very active in children’s ministry in our church. He is committed and dedicated to the ministry of music. He plays keyboard during church service. He is a humble young boy, and we are proud of him. He has a lot of potential to grow his music talent to great heights.”

The Rev. Nyasha Mutanga, associate pastor, said Chashe provides spiritual inspiration. “As a church, we are encouraged by his gift, and other children will be encouraged to actively participate in church worship service,” she said.

Addmore Chokera, Chashe’s father, said that his music appreciation is not only a positive impact on others, but also on his 3-year-old sister, Nashe.

“Nashe developed self-confidence to perform in front of an audience as was evidenced during the main service at Chisipiti UMC during the Junior Church Sunday,” he said. “She sang all songs and even did the lead singing on one of the songs, ‘Hakuna Wakaita sa Jesu’ (‘There’s No One in This World Like Jesus’).

“She has learned to appreciate music. She has been inspired to learn piano, singing and the theory of music. She has covered a lot of ground at the beginners' level because of her brother,” he added.

“I thank God, who gave me the musical talent,” Chashe said. “I am grateful to God for my parents who teach me music, my drum teacher Max, my class music teacher Theresa, my violin teacher Ricardo and my grade-3 teacher Trewartha for perfecting my music.”

He continued, “I thank my friends and my sister Nashe for their support, my pastors and Chisipiti UMC for allowing me to provide piano accompaniment during worship services. Music needs hard work and discipline.”

Online worship services are a great start, says a digital marketing expert and lay minister, but it is time to move into digital spaces like the metaverse if the church wants to be relevant in the future.
Faith Sharing

The rewards of online ministry are too rich to give up if and when the coronavirus is a thing of the past, said a pastor in Louisiana. Three stories from First United Methodist Church of Baton Rouge illustrate his point.
Faith Stories