Two weekends a month, the Rev. Bradley Barton works an overnight shift as a guard at Tygart Valley Regional Jail. He goes in at 8 p.m. Saturday and gets off at 8 a.m. Sunday.

Then he hightails it to the first of three Sunday morning worship services where he preaches. If he runs late, he preaches in his uniform.

“The people are forgiving about that,” he said. “They know I have a job.”

Barton has a fourth church that doesn’t meet until Sunday at 6 p.m. When he finishes there, he goes right back to the prison for another overnight shift.

The other weekends are easier, but the 63-year-old Barton balances his full-time work as a corrections officer with serving as pastor to the Leadmine, St. George, Macedonia and Union Chapel United Methodist churches.

Read profile of the Rev. Jamie Sprague, whose grocery store background has helped him as a part-time local pastor.

All are in the northeast West Virginia mountains, and to ride the circuit in a conventional way is a 61-mile trip. Barton knows shortcuts and takes them as needed on Sunday morning.

“I won’t show you the backroads,” he told a visitng reporter. “I don’t want to terrify you.”

Barton grew up in tiny Kitzmiller, Maryland, across the North Branch of the Potomac River from West Virginia. His was a deeply involved United Methodist family, to the point that seven pastors and two district superintendents attended his mother’s funeral. His great-grandfather was a Methodist circuit rider.

As a boy in church, Barton felt his first call to ministry. “Heard” would be more precise.

“I was walking down the aisle, and a voice behind me said, ‘This is going to be your home for life,’” Barton remembers. “That would have been nothing unusual, but I was in the church all by myself.”

Barton did not go the usual route to ministry — college, followed by seminary. He had a long career in a lumber mill and became a corrections officer about 10 years ago.

In 2013, Barton was a certified lay minister at Hambleton United Methodist Church in West Virginia, when he was asked to be associate supply pastor to the four churches of the St. George Charge. 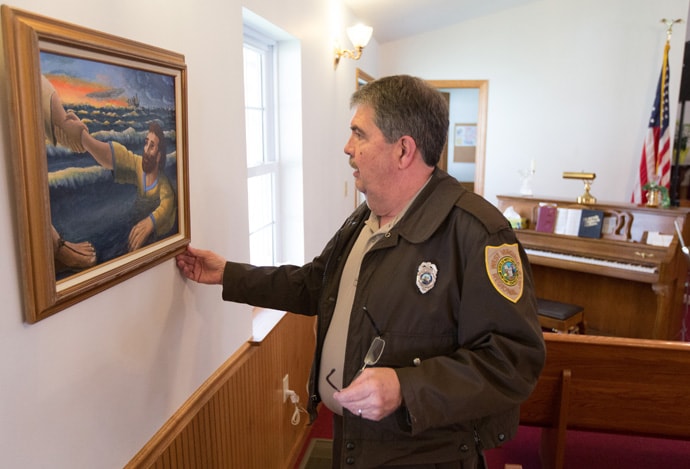 Barton jumped in, and his life became much busier. His wife, LuAnn, a home health-care nurse, goes with him to most worship services and keeps his schedule.

“I wake up in the morning, and she tells me what I’m doing,” Barton said.

Barton has learned the personalities of his four churches, which total about 120 members. He recalls encountering the consternation of a woman at St. George. 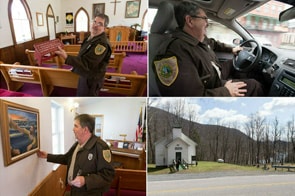 “She said, ‘We don’t know who keeps locking the doors,’” Barton recalled. “I said, ‘That’s me, Jane.’ She said, ‘Well, quit it.’ She informed me that you do not lock the doors of that church.”

This spring, Barton went to local pastor licensing school. Bishop Sandra Steiner Ball of the West Virginia Conference has formally appointed him as part-time local pastor to the four churches.

Though he is eligible for Social Security, Barton has no plans to retire from guarding prisoners and certainly not from preaching.

“You show me where Moses entered the retirement center on Mount Sinai,” he said.